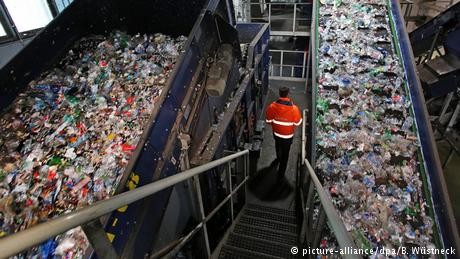 France plans to introduce a penalty system for consumer goods that are packaged with non-recycled plastic, an Environment Ministry official said in a newspaper interview on Sunday.

The French government has pledged to transition the country to recycling 100 percent of its plastic by 2025 to reduce the vast amount ofplastic finding its way into oceans.

How France will promote recycled plastic

Brune Poirson, secretary of state for ecological transition, told Journal du Dimanche newspaper that the government would introduce a series of measures:

Just 25 percent of plastic in France is recycled. Single use plastic bags have already been outlawed in supermarkets but France is hoping to make serious steps in line with European Commission goals.

"Declaring war on plastic is not enough. We need to transform the French economy," Poirson told the paper. "When there's a choice between two bottles, one made of recycled plastic and the other without, the first will be less expensive," she said.

Flore Berlingen of the association Zero Waste France told Agence France-Presse: "We're hoping that companies play along so that clients aren't the ones penalized."

Emmanuel Guichard of the Elipso federation of plastic packaging makers gave a cautious welcome: "For bottles, giving consumers a choice is possible. But we can't forget other items — today there's no recycled plastic available for yogurt pots."

Global plastic production has increased more than 40 percent over the past 10 years, largely driven by packaging.

The European Commission has made cutting down on plastic a priority for the bloc, introducing laws in May requiring the use of alternative materials and incentives for businesses.

A 2015 research report found that each year roughly 8 million metric tons (8.8 million US tons) of plastic are discarded into the ocean. The plastic forms vast patches of floating waste, but also breaks down into tiny particles and enters the food chain.