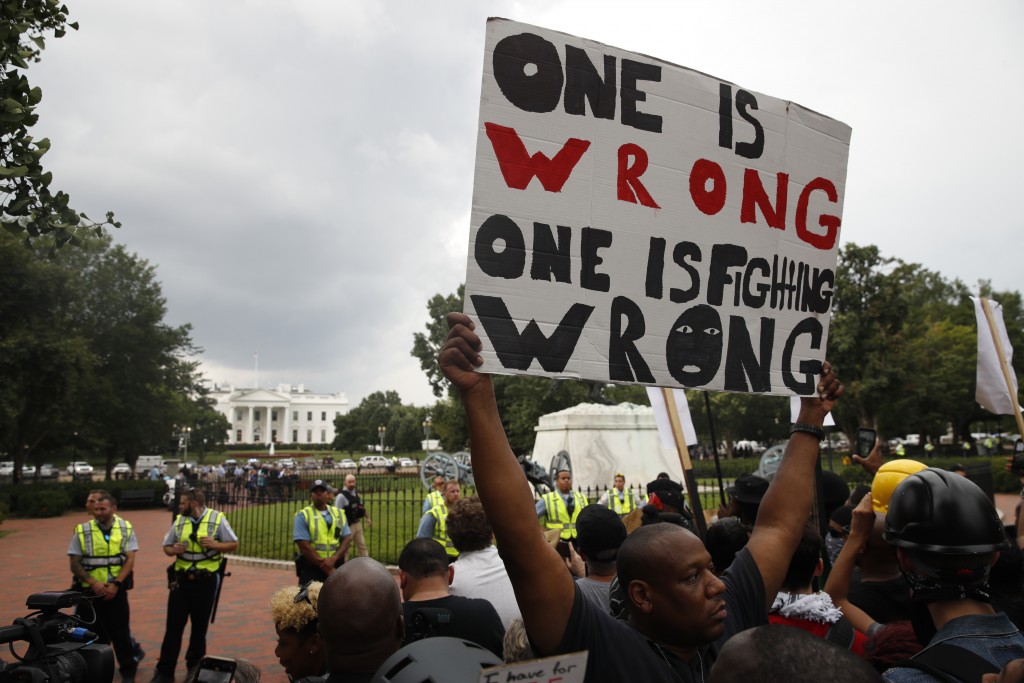 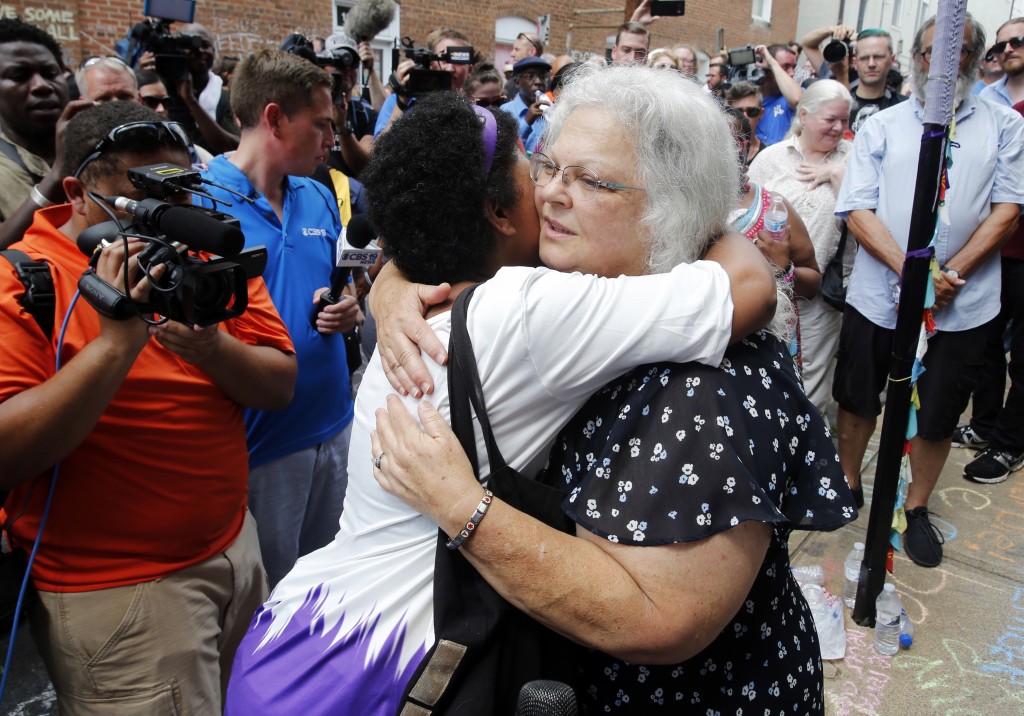 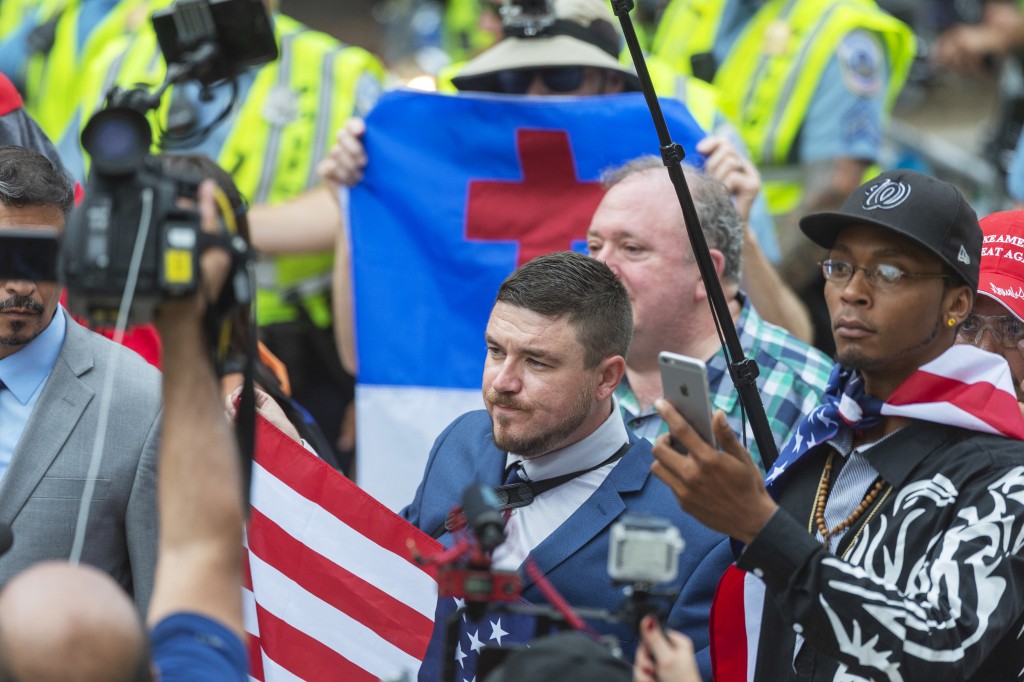 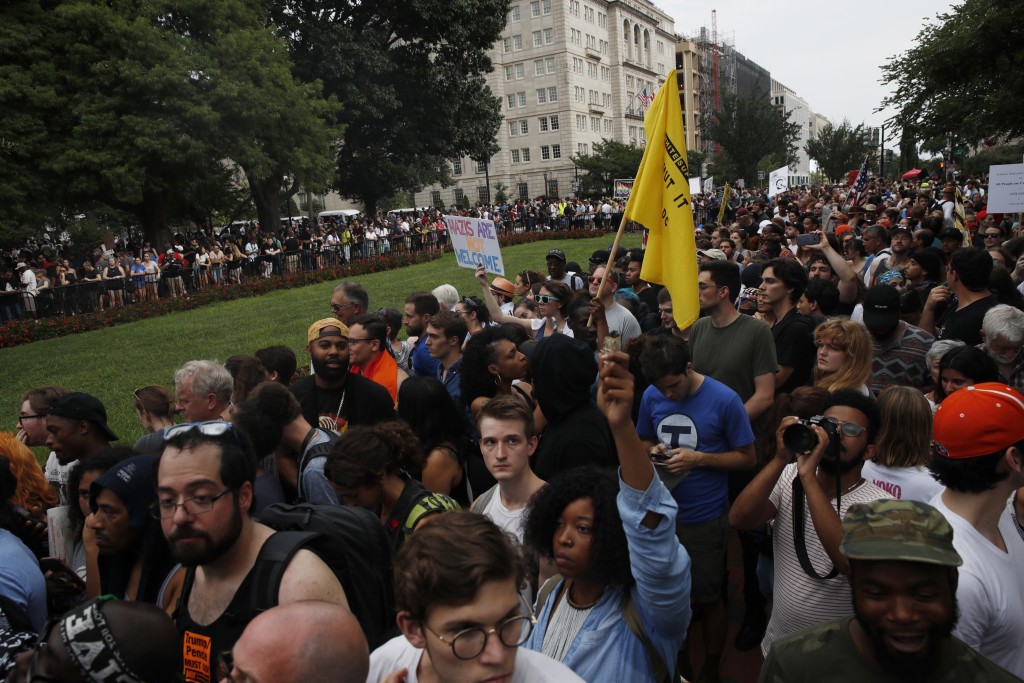 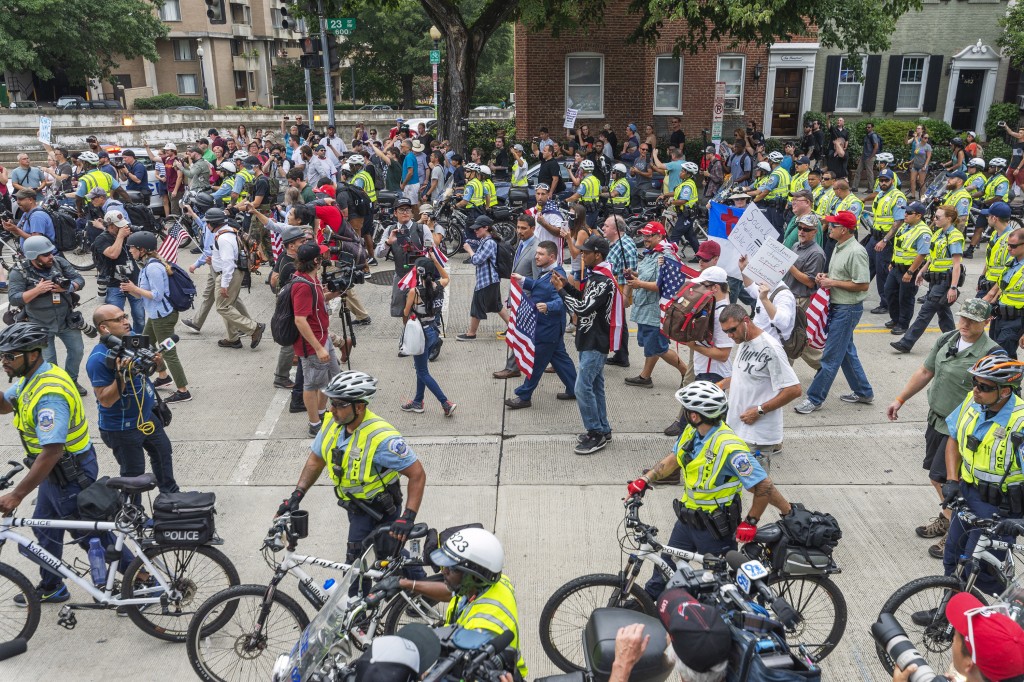 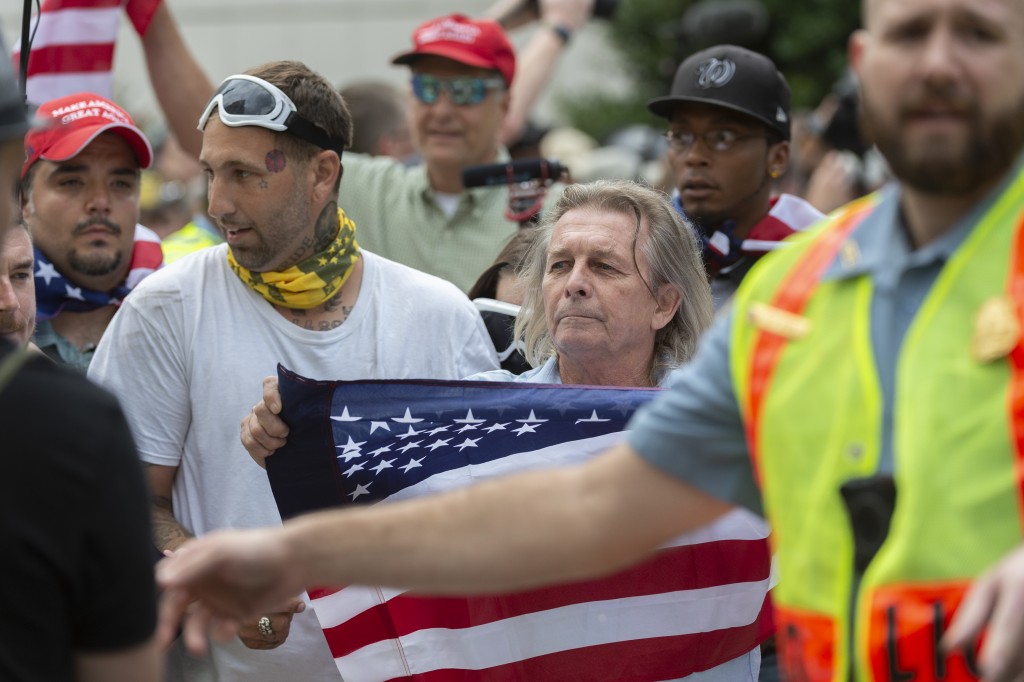 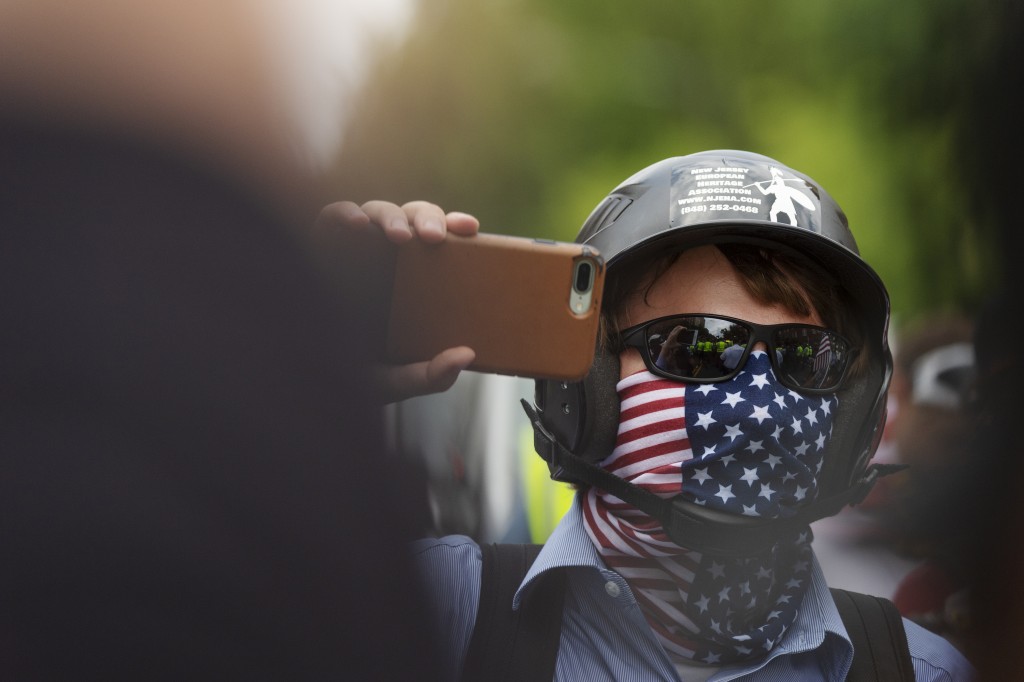 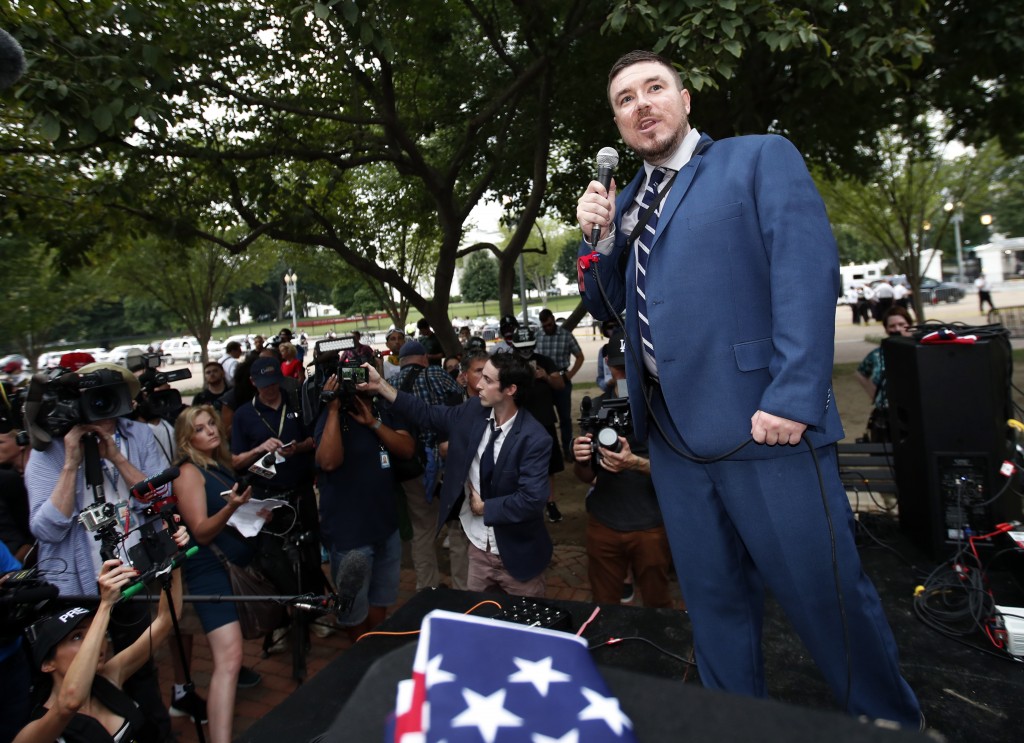 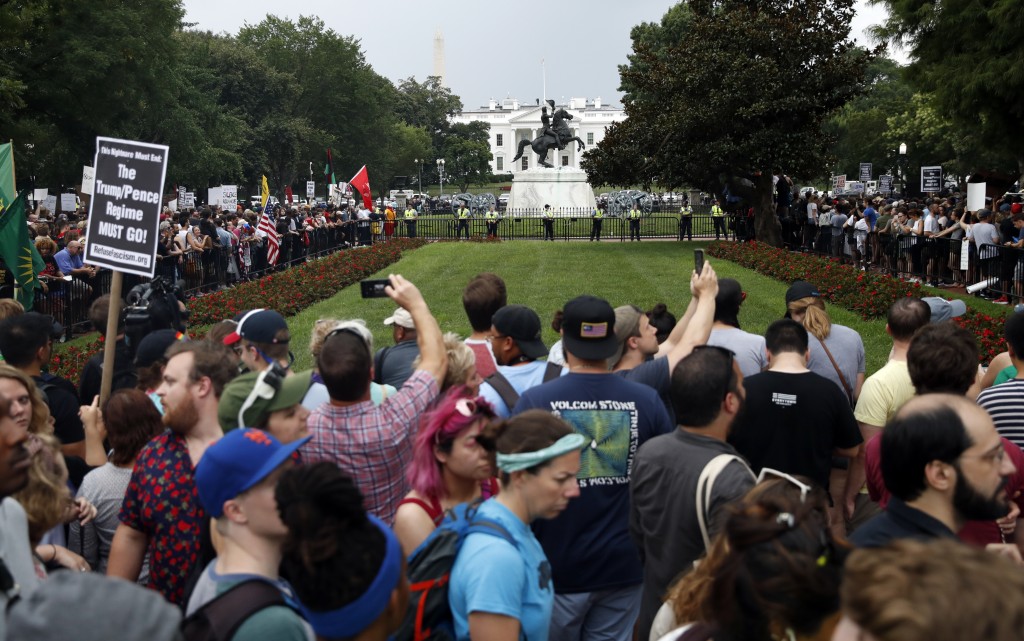 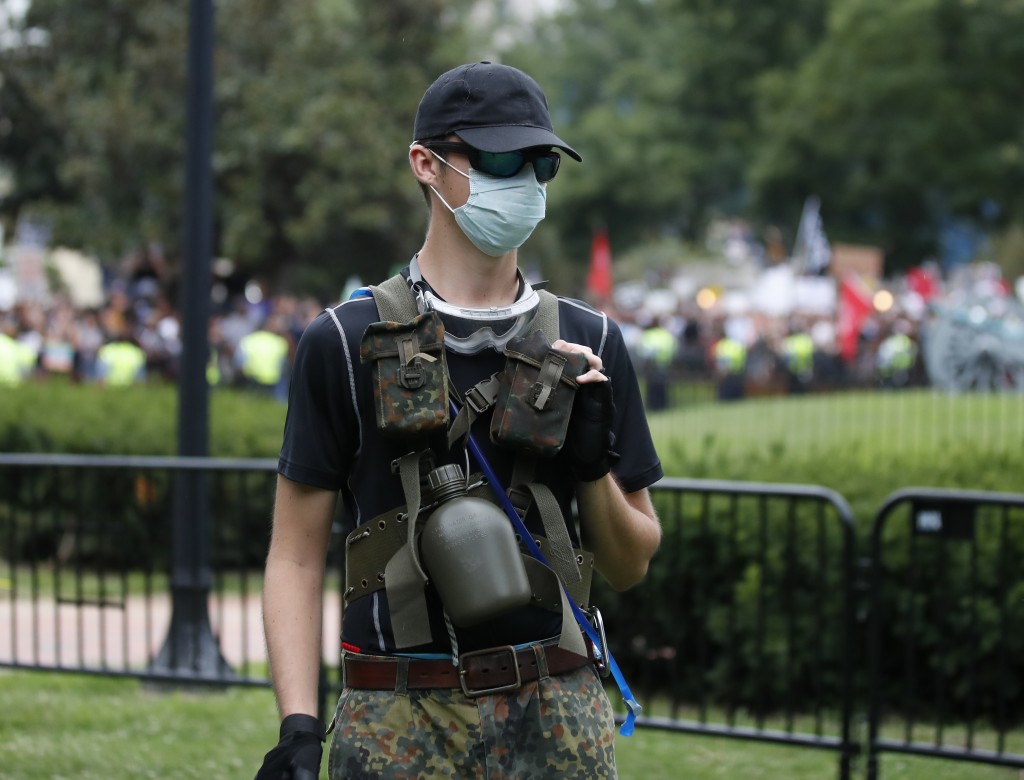 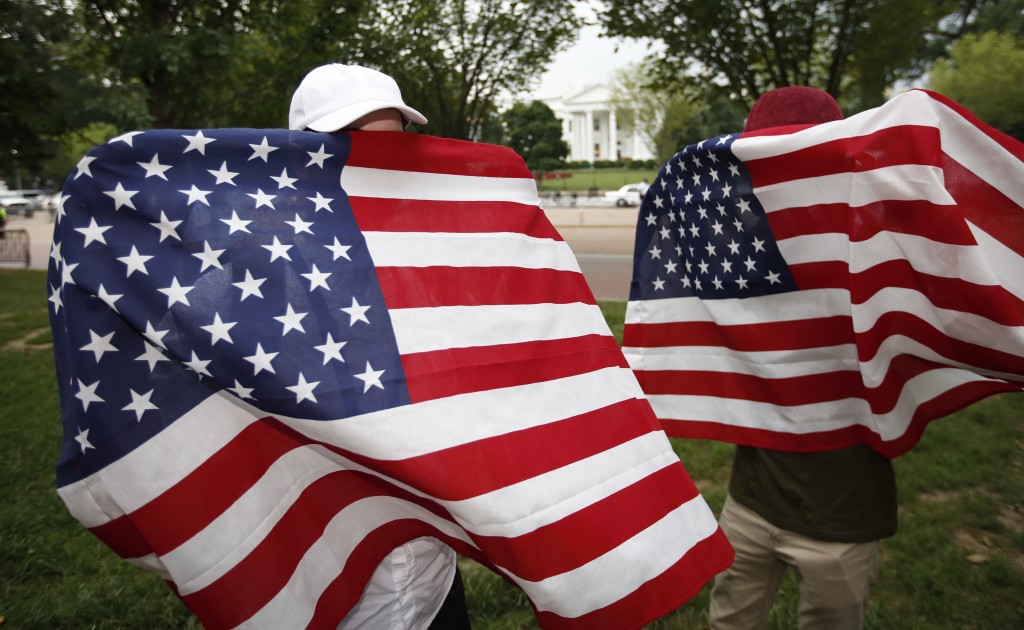 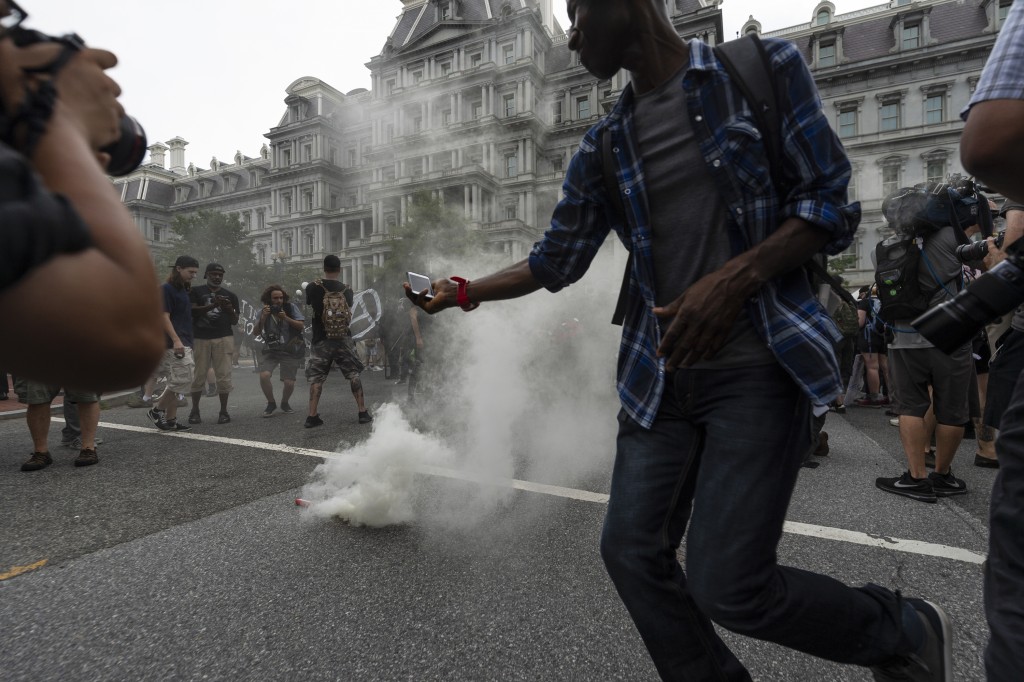 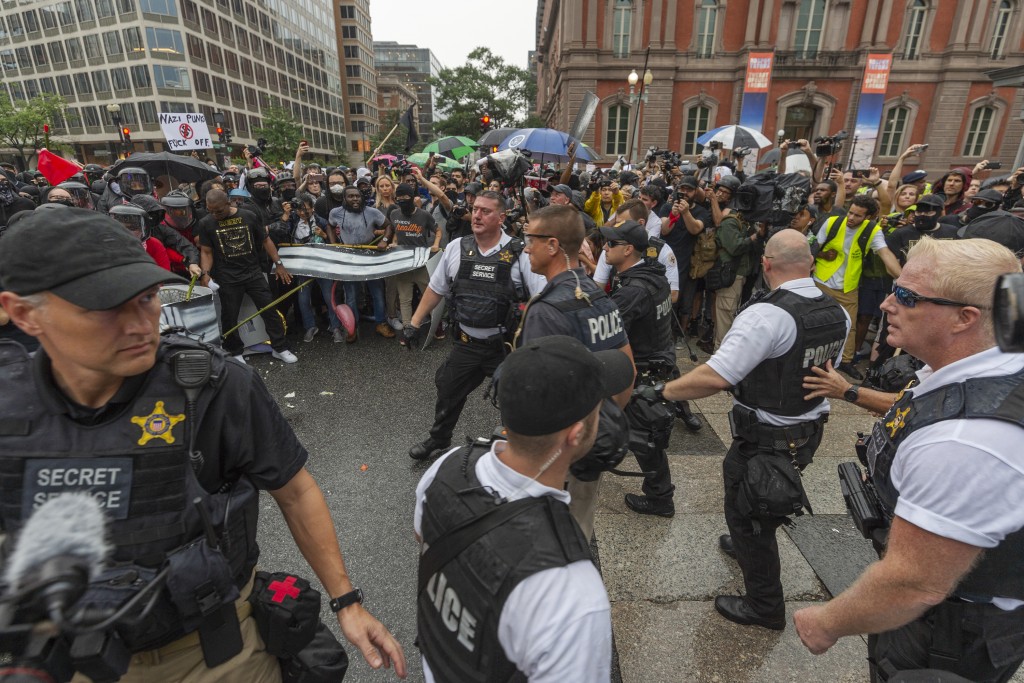 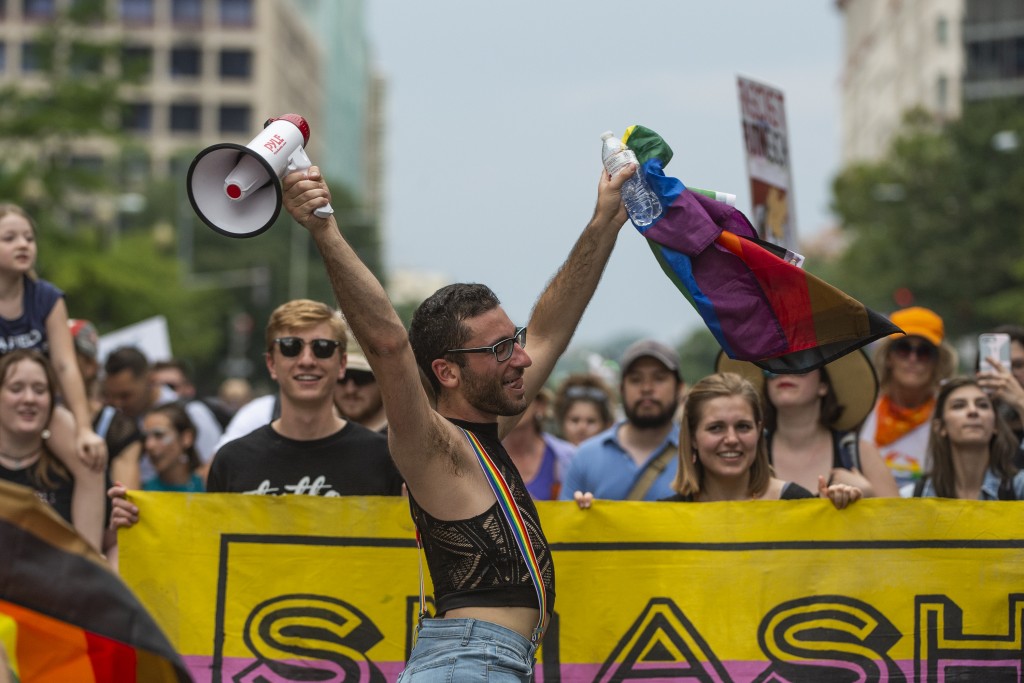 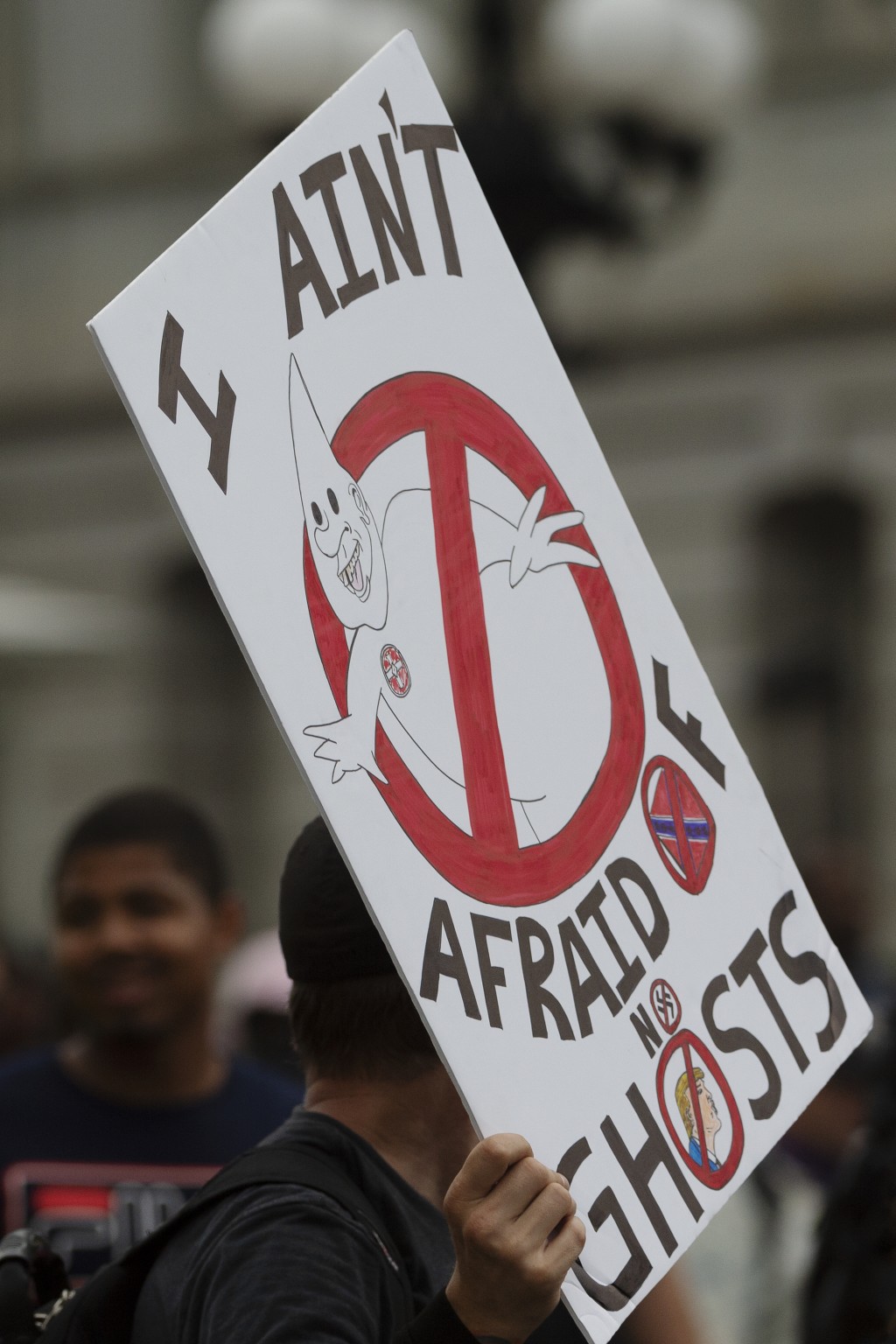 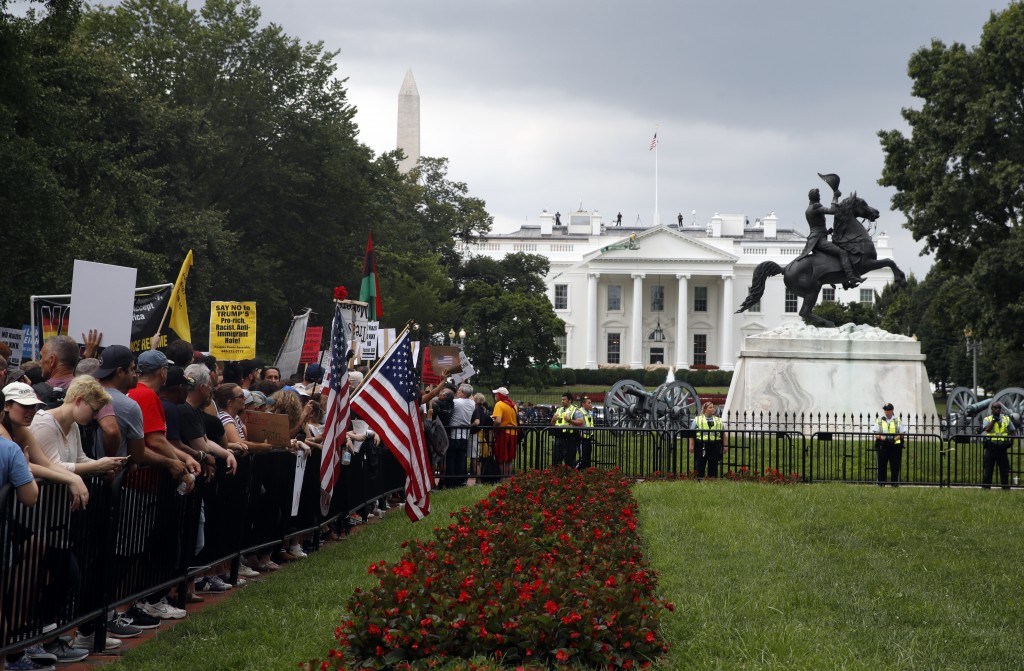 WASHINGTON (AP) — Thousands of people wanting to send a message that racism isn't welcome in the United States gathered in a park outside the White House to protest a white nationalist rally on the anniversary of the deadly violence in Charlottesville, Virginia.

In the end, less than two dozen white nationalists showed up.

The events held in both Charlottesville and Washington, largely peaceful though tense at times, were part of a day of speeches, vigils and marches marking a year since one of the largest gatherings of white nationalists and other far-right extremists in a decade. One person was arrested in Washington on Sunday, and four others were arrested in Charlottesville.

In Charlottesville, the mother of the woman killed at last summer's rally visited the site of the attack, saying the country's racial wounds still have not healed. In Washington, a phalanx of police and a maze of metal barriers separated the small group of white nationalists from shouting counterprotesters within view of the White House.

Jason Kessler, the principal organizer of last year's "Unite the Right" event, led the Sunday gathering he called a white civil rights rally in Lafayette Square. Kessler said in a permit application that he expected 100 to 400 people to participate, but the actual number was far lower: only around 20.

Kessler's group was dogged by jeering crowds from the moment they emerged from the Foggy Bottom Metro station; they marched about a mile to the White House surrounded by uniformed officers and police vehicles. Behind the barricades, in the northern half of Lafayette Park, thousands of counterprotesters struggled to even catch a clear glimpse of the white nationalist rally.

The counterprotesters had gathered hours earlier in Lafayette Park and nearby Freedom Plaza. Makia Green, who represents the Washington branch of Black Lives Matter, told Sunday's crowd in Freedom Plaza: "We know from experience that ignoring white nationalism doesn't work."

After about 90 minutes, the white nationalists were packed into a pair of vans and driven to safety.

President Donald Trump, who further enflamed tensions last year by blaming "both sides" for the violence, wasn't at home this year — he has been at his golf club in New Jersey for more than a week on a working vacation.

Earlier in the day in Charlottesville, the mother of Heather Heyer, the 32-year-old killed during last year's rally, said there's still much healing to be done.

Susan Bro laid flowers at a makeshift memorial at the site of the attack in downtown Charlottesville. With a crowd gathered around her, she thanked them for coming to remember her daughter but also acknowledged the dozens of others injured and the two state troopers killed when a helicopter crashed that day.

"There's so much healing to do," Bro said. "We have a huge racial problem in our city and in our country. We have got to fix this, or we'll be right back here in no time."

Hundreds of neo-Nazis, skinheads and Ku Klux Klan members and other white nationalists descended on Charlottesville on Aug. 12, 2017, in part to protest over the city's decision to remove a monument to Confederate Gen. Robert E. Lee from a park.

Violent fighting broke out between attendees and counterprotesters. Authorities eventually forced the crowd to disperse, but chaos erupted again when the car barreled into the crowd.

James Fields Jr., of Maumee, Ohio, is charged in state court with murder in Heyer's killing and faces separate hate crime charges in federal court. He pleaded not guilty last month to the federal charges.

Among the other anniversary events was a Sunday morning community gathering at a park that drew more than 200 people. The group sang and listened to speakers, among them Courtney Commander, a friend of Heyer's who was with her when she was killed.

"She is with me today, too," Commander said.

Law enforcement officials faced blistering criticism after last year's rally for what was perceived as a passive response to the violence that unfolded. A review by a former U.S. attorney found a lack of coordination between state and city police and an operational plan that elevated officer safety over public safety.

The anniversary weekend was marked by a much heavier police presence, which also drew criticism from some activists.

Demonstrators on Sunday marched through Charlottesville chanting, "Cops and Klan go hand in hand," and "Will you protect us?"

The city of Charlottesville said four people were arrested in the downtown area. Two arrests stemmed from a confrontation near the Lee statue where a Spotsylvania, Virginia, man stopped to salute, a Charlottesville woman confronted him and a physical altercation took place, officials said.

For the complete AP coverage marking one year since the rally in Charlottesville, visit https://apnews.com/tag/CharlottesvilleAYearLater