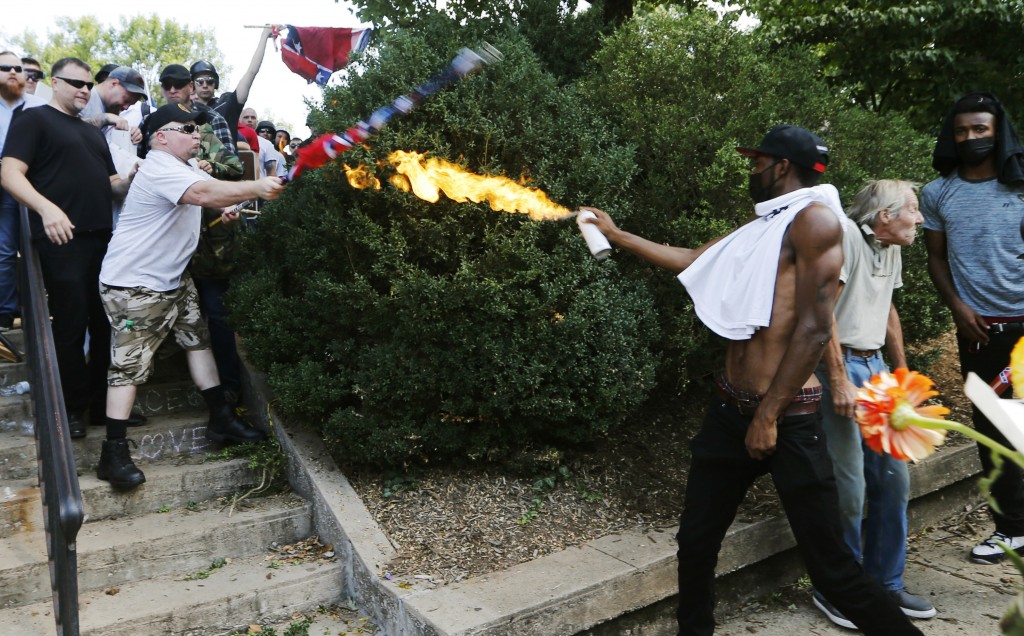 WASHINGTON (AP) — There has been no reset, no moment of national healing.

One year after blaming "both sides" for violent clashes between white supremacists and counterprotesters, President Donald Trump still flirts with racially tinged rhetoric — and feels little blowback from Republican leaders or GOP voters when he does. Black leaders and Democrats argue Trump's tone and actions on race have gotten even worse in the months since the clashes in Charlottesville, Virginia.

The result is a starkly segregated political landscape where there is scant punishment for racially loaded rhetoric and, at times, clear reward.

Democrats are pinning their hopes of flipping control of Congress on mobilizing liberals and minorities, particularly black voters. And Republicans' best chance of holding off a Democratic wave is strong turnout among the conservative white voters who helped sweep Trump into office and often cheer his willingness to dive into hot-button issues with racial overtones.

Trump has told associates that he believes at least one of those issues — his criticism of black NFL players who kneel during the national anthem — is a political winner because it energizes his white base. He revived the matter on Friday, tweeting that the players are expressing outrage "at something that most of them are unable to define." Players have said they are protesting police killings of black men, social injustice and racism.

Trump's rise to power can be traced through a series of statements that invoke racial stereotypes. In 1989, he called for the death penalty for the Central Park Five, five black and Hispanic teenagers accused of raping and beating a white woman; they were later exonerated through DNA evidence, but Trump has suggested he still believes they're guilty. For years, Trump promoted the lie that President Barack Obama was born in Kenya. Over the past year, from his perch in the White House, he's repeatedly questioned the intelligence of prominent black figures, including Rep. Maxine Waters, D-Calif., basketball star LeBron James and CNN anchor Don Lemon, whom he called "the dumbest man on television."

"One of the oldest strategies is to call into question the intellect of African-Americans," said Mitch Landrieu, the former Democratic mayor of New Orleans. "It's just sad and awful."

NAACP President Derrick Johnson said the black community has "never seen this level of tone deafness or this total disregard" from a modern American president.

Even against that backdrop, Trump's response to Charlottesville stood out.

In his initial remarks about the violent clashes that killed counterprotester Heather Heyer, the president said there were "very fine people on both sides."

Two days later, reading carefully from a written statement, he condemned the KKK, white supremacists and neo-Nazis. Yet in an unscripted moment the next day, he again said there was "blame on both sides."

Trump revisited the Charlottesville controversy on Saturday, tweeting that the clashes "resulted in senseless death and division" and he condemns "all types of racism and acts of violence." He ended his tweet by wishing "Peace to ALL Americans!"

Charlottesville prompted some Republican leaders to condemn him. Some business leaders abandoned White House advisory committees, and some West Wing aides let it be known that they contemplated quitting.

But, ultimately, the outrage from those corners subsided. Washington moved on. GOP leaders who harshly criticized the president at the time still largely back his agenda, well aware that polling shows there was no sustained damage to Trump's popularity among the party's voters after Charlottesville.

"If it did anything, it reinforced opinions," said Whit Ayres, a Republican pollster. "The intensity of opinions changed, both supportive and against. It confirmed what people thought about Trump. It didn't change their views."

According to a CBS News poll taken in the days after the Charlottesville clashes, a wide share of Democrats — about 7 in 10 — said Trump's policies encouraged racial division in the country, little different from a poll conducted earlier in the year. By comparison, more than 8 in 10 Republicans said the president's policies either had no effect on race relations or encouraged unity.

Trump's job approval among blacks has shown little change, consistently stuck around 10 percent in most surveys.

The White House did not respond to questions about whether Trump has any regrets about his handling of the Charlottesville protests or other racial rhetoric.

Some of Trump's black supporters argue that the criticism is overblown.

"Either people have a short memory or they've brushed it under the rug and they're focused on what's really important: their ability to take care of themselves economically," said Michael Barnett, an African-American Trump ally who serves as chairman of the Palm Beach GOP and vice chairman of the Florida GOP.

Yet a year after Charlottesville, the president's relationship with the black community remains deeply strained.

In a new memoir, former White House aide Omarosa Manigault Newman labels Trump a "racist" and claims she's been told there are tapes of him using the N-word repeatedly while filming "The Apprentice" reality series. A White House spokeswoman dismissed Manigault Newman as "a disgruntled" former employee.

Pollster Henry Fernandez of the African-American Research Collaborative reports that black women in particular feel "disrespected" by Trump, a fact that may mean Charlottesville will come back to hurt Trump after all.

Black women helped fuel Democratic victories in recent months in Alabama and Virginia. And black voters make up a small but motivated slice of the electorate this fall: at least 7 percent of the electorate in more than a third of the nation's most competitive House districts, Fernandez noted.

New Jersey Sen. Cory Booker, a Democrat and one of just three African-Americans in the Senate, warned that the consequences for Trump's tone and actions could extend well beyond political pain.

Booker added: "These things are dangerous."