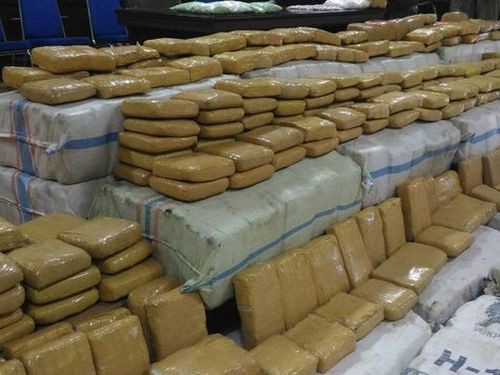 Taiwan's Ministry of Finance (MOF) on Sunday denied allegations by the Philippines that recent consignments of illicit drugs smuggled into the country were sourced in Taiwan.

The ministry has confirmed after looking into the issue that the methamphetamine hydrochloride (shabu) smuggled into the Philippines inside magnetic scrap lifters packed in shipping containers did not originate in Taiwan, it said in a statement.

Philippine authorities recently reported the discovery of two batches of illegal drugs allegedly brought inside the country from Taiwan, according to media reports.

The Philippine Bureau of Customs on Tuesday intercepted a shipment of around 500 kilograms of shabu hidden in magnetic scrap lifters with the help of sniffer dogs at the Manila International Container Terminal.

The Philippine Drug Enforcement Agency (PDEA) said the shipment was sourced from Taiwan and used Malaysia as a transshipment point. Taiwan's Ministry of Finance said Sunday, however, that its own investigation found the shipment to have originated in Malaysia.

PDEA agents suspect a second shipment was smuggled into the Philippines after agents conducted more raids and discovered four other magnetic lifting devices at a warehouse in Cavite, some 40 kilometers south of Manila.

Although the agents found nothing, they believed that illicit drugs had been hidden in the lifters at some point, as sniffer dogs detected the presence of drugs, Philippine authorities said Friday.

PDEA director general Aaron Aquino said the lifters were similar to the ones found at the Manila International Container Port.

Those drugs may have also come from Taiwan or China, Philippine authorities said, according to the PDEA.

But Taiwanese authorities said that shipment was exported from Vietnam and transited through the port of Kaohsiung in Taiwan on July 6 before arriving in the Philippines, according to the Finance Ministry.

Though the shipments were not exported from Taiwan, the ministry said, Taiwan's representative office in the Philippines will contact the PDEA to provide assistance in cracking the drug ring, said to be a Taiwanese drug syndicate based in the Golden Triangle.

Taiwan's customs will strengthen cooperation with other government agencies to step up anti-drug efforts and promote the exchange of anti-drug intelligence and information with law enforcement authorities of other countries, the MOF statement said.