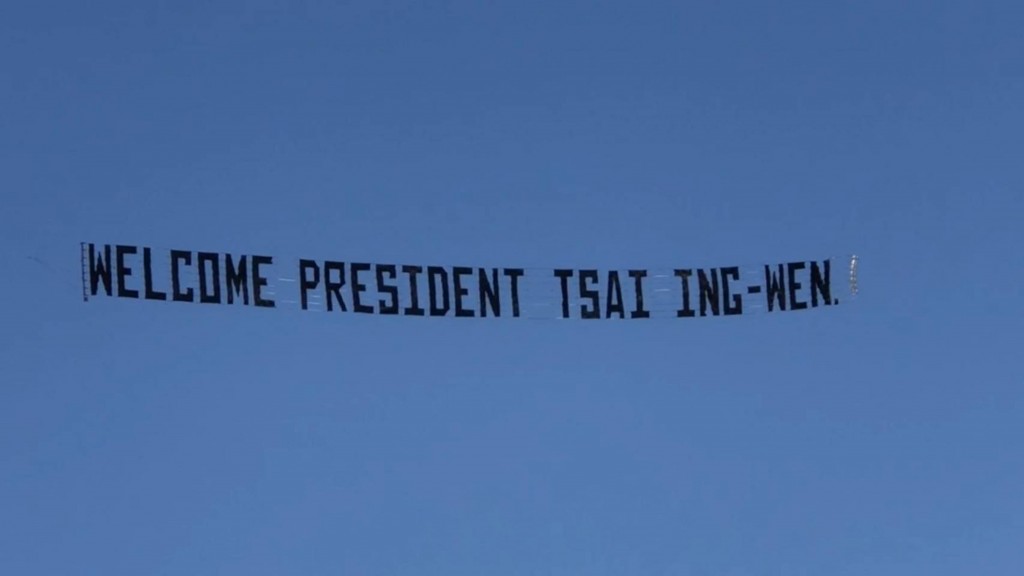 Tsai arrived in Los Angeles Sunday afternoon and was then escorted by motorcade to the city's famous InterContinental Hotel. A Taiwan flag waved proudly beside the American flag outside of the hotel. Over 500 Tsai supporters gathered at the hotel to show their support for the President, holding banners and cheering "Good luck Taiwan" and "Hello Mrs. President," reported CNA.

Pro-China supporters were also present at the reception. A small plane was hired to fly the banner "ONE CHINA! TAIWAN IS PART OF CHINA!" (只有一個中國。台灣是中國的一部分). A group of Taiwan supporters were also prepared to take to the skies, flying a small banner that simply said, "WELCOME PRESIDENT TSAI ING-WEN."

President Tsai was accompanied by Secretary General Chen Chu (陳菊) and Minister of the Overseas Community Affairs Council, Wu Hsin-hsing (吳新興). The delegation is slated to visit the Culture Center of Taipei Economic and Cultural Office in Los Angeles and to hold a free dinner for over 1,200 second-generation overseas Taiwanese. Tsai is on a nine-day trip to visit two of Taiwan's diplomatic allies, Brazil and Paraguay. In addition to Los Angeles, Tsai will have a stopover in Houston on her return trip, Aug. 18.