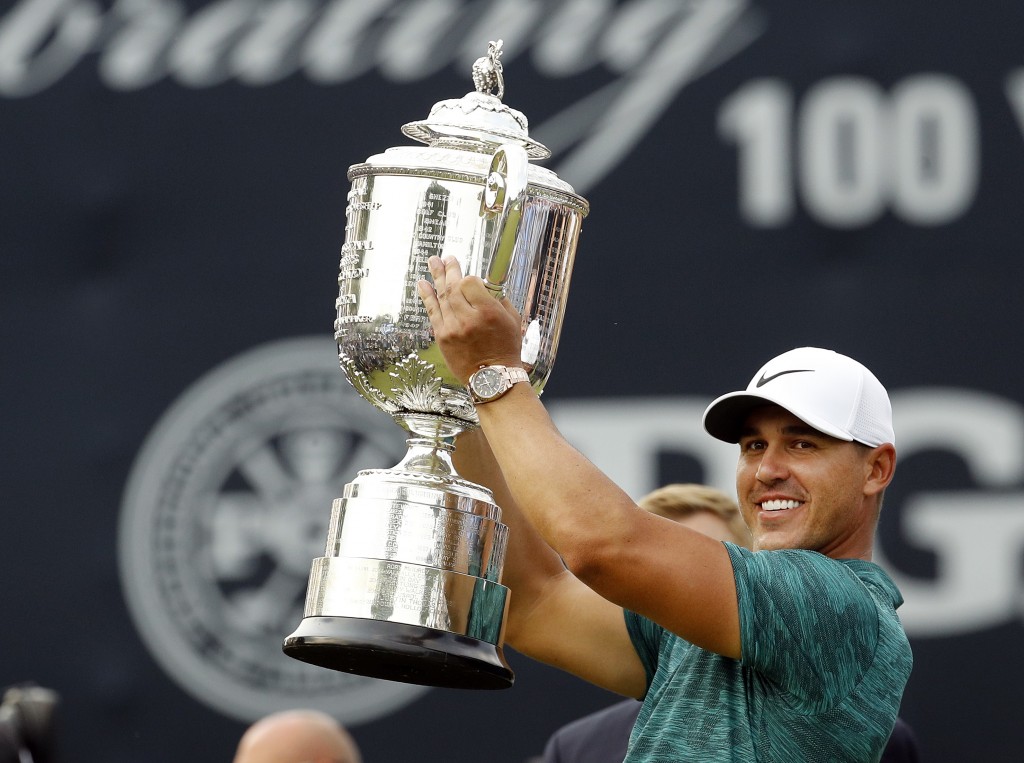 And it still felt — and sounded — like he was playing second billing to Tiger Woods.

With roars for Woods unheard anywhere this side of Augusta National, Koepka kept his cool and ran off two birdies on the back nine at Bellerive with Adam Scott tied for the lead and Woods one shot behind.

Koepka closed with a 4-under 66 for a two-shot victory, making him only the fifth player to win the U.S. Open and PGA Championship in the same year.

Even with two bogeys, Woods shot 64 for his lowest final round in a major.

After wasting one chance to put it away, Koepka ran kept attacking flags and ran in birdie putts of 10 feet on No. 15 and 7 feet on No. 16 to end the drama. He tapped in for par on the final hole to set the PGA Championship scoring record at 264. It also tied the major championship record that Henrik Stenson set at Royal Troon two years ago in the British Open.

Koepka has won three of the last six majors he played, and two of three this year alone. He joined Woods, Jack Nicklaus, Ben Hogan and Gene Sarazen as the only players to win the two U.S. majors that rotate to different courses in the same year.

The 28-year-old Floridian also joined Jordan Spieth, Woods, Nicklaus and Tom Watson as the only players with three majors before turning 30 since World War II.

Scott was tied for the lead until Koepka's birdies. Scott missed a 6-foot birdie putt on the par-5 17th that would have pulled him to within one shot — right after Koepka missed from the same range — and then made bogey on the 18th for a 67 to finish alone in third.

On Sunday, Gillman was 5 up after nine holes, winning four straight on Nos. 4-7. She was 5 up after 18 holes and increased the margin to seven on the second 18.

Gillman won the Japan LPGA's Century 21 Ladies Golf Tournament last month for her first victory in a professional event. She also starred in U.S. victories in the Curtis Cup and Palmer Cup, and tied for 27th this year in the U.S. Women's Open.

The 21-year-old Jeon is from South Korea. She transferred from Daytona State Junior College to Alabama, with Gillman serving as Jeon's host when she took her recruiting trip to Tuscaloosa last fall.

HAYWARD, Calif. (AP) — Trevor Cone won the Ellie Mae Classic for his first Web.com Tour title, closing with a 6-under 64 for a four-stroke victory over Josh Teater.

Cone, the 25-year-old former Virginia Tech player who started the year with only conditional status on both Web.com and Mackenzie tours, finished at 23-under 257 at TPC Stonebrae. He opened with rounds of 64, 63 and 66 to take a one-stroke lead into the final round

Teater finished with a 67.

Oriol and Fernandez beat Iceland's Birgir Hafthorsson and Axel Boasson 2 up in the final. In the women's final Persson and Wessberg topped France's Justine Dreher and Manon Molle in 20 holes.

Viraj Madappa became the youngest Indian winner in Asian Tour history at 20, taking the Take Solutions Masters in front of the home crowd in Bengaluru. Madappa closed with a 4-under 67 for a two-shot victory. ... Kim Koivu became the first Finn to win the Vierumaki Finnish Challenge, beating Scotland's Robert MacIntyre with a 15-foot birdie putt on the first hole of a playoff. Koivu and MacIntyre each shot 6-under 66 in the European Challenge Tour event. ... South Africa's JC Ritchie won the Sun Carnival City Challenge for his second Sunshine Tour victory. He birdied the final hole for an even-par 72 and one-stroke victory at Ebotse Links. ... Corey Pereira won the ATB Financial Classic for his first Mackenzie Tour title. He shot 64-65-62-67 at Country Hills in Calgary, Alberta, to finish at 26 under — a stroke ahead of Lee Hoges (67). Tyler McCumber, seeking his third straight victory, was third at 22 under after a 68. The 23-year-old Pereira played at the University of Washington.

Oh Ji Hyun ran away with the Korean LPGA's Jeju Samdasso Masters, winning by six strokes at Ora in Jeju. The South Korean player shot 67-66-68. She won the Korea Women's Open in June. ... South Korea's Ah-Reum Hwang won the Japan LPGA's NEC Karuizawa 72. She shot 63-67-69 for a two-stroke victory. ... Lauren Coughlin won the Symetra Tour's PHC Classic in Milwaukee. She closed with a 6-under 6 for a one-stroke victory over money leader Dottie Ardina at Brown Deer Park.