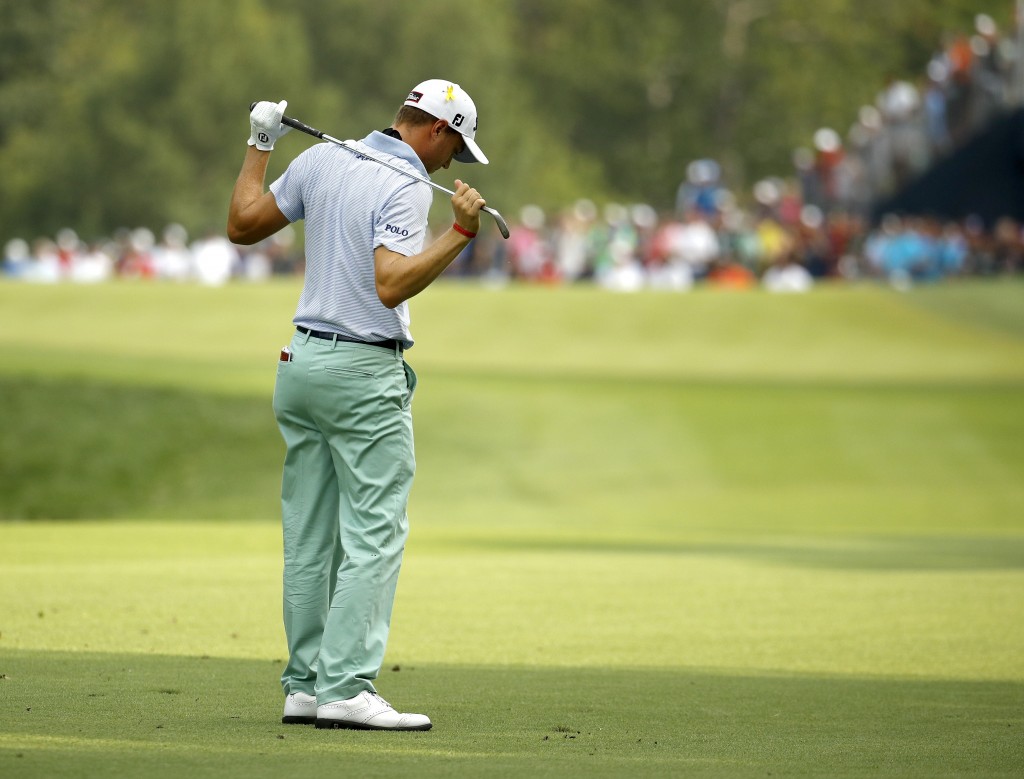 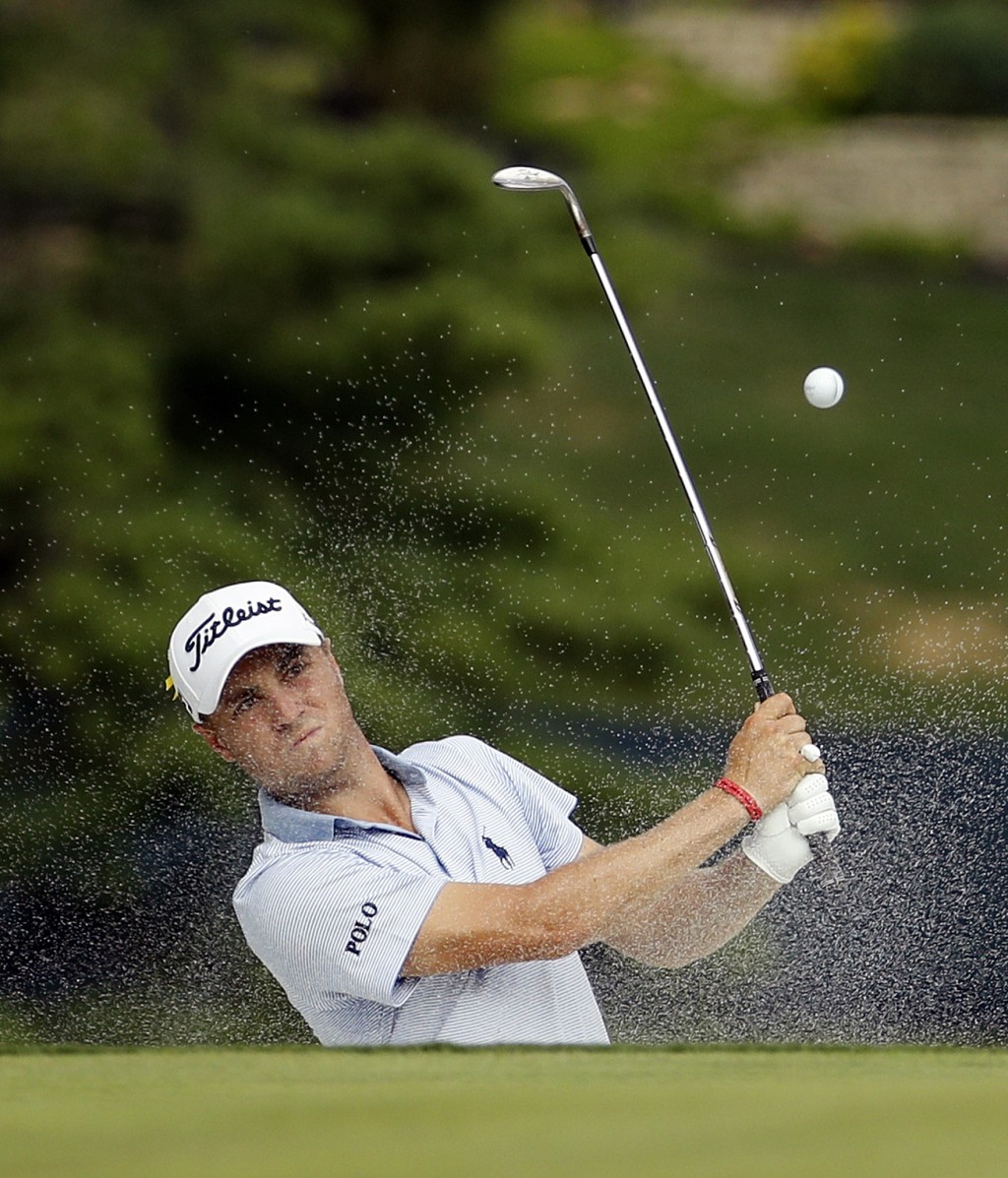 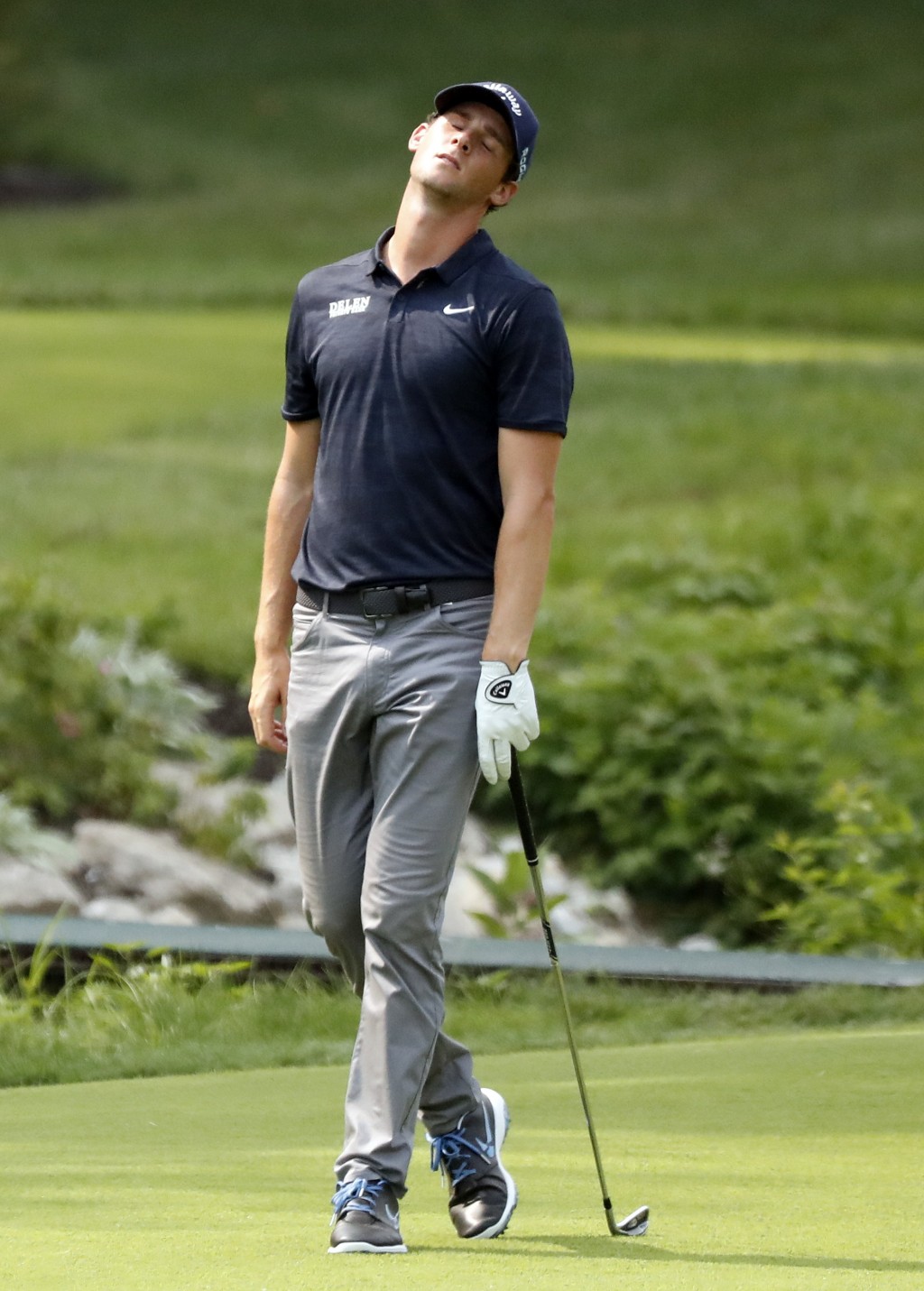 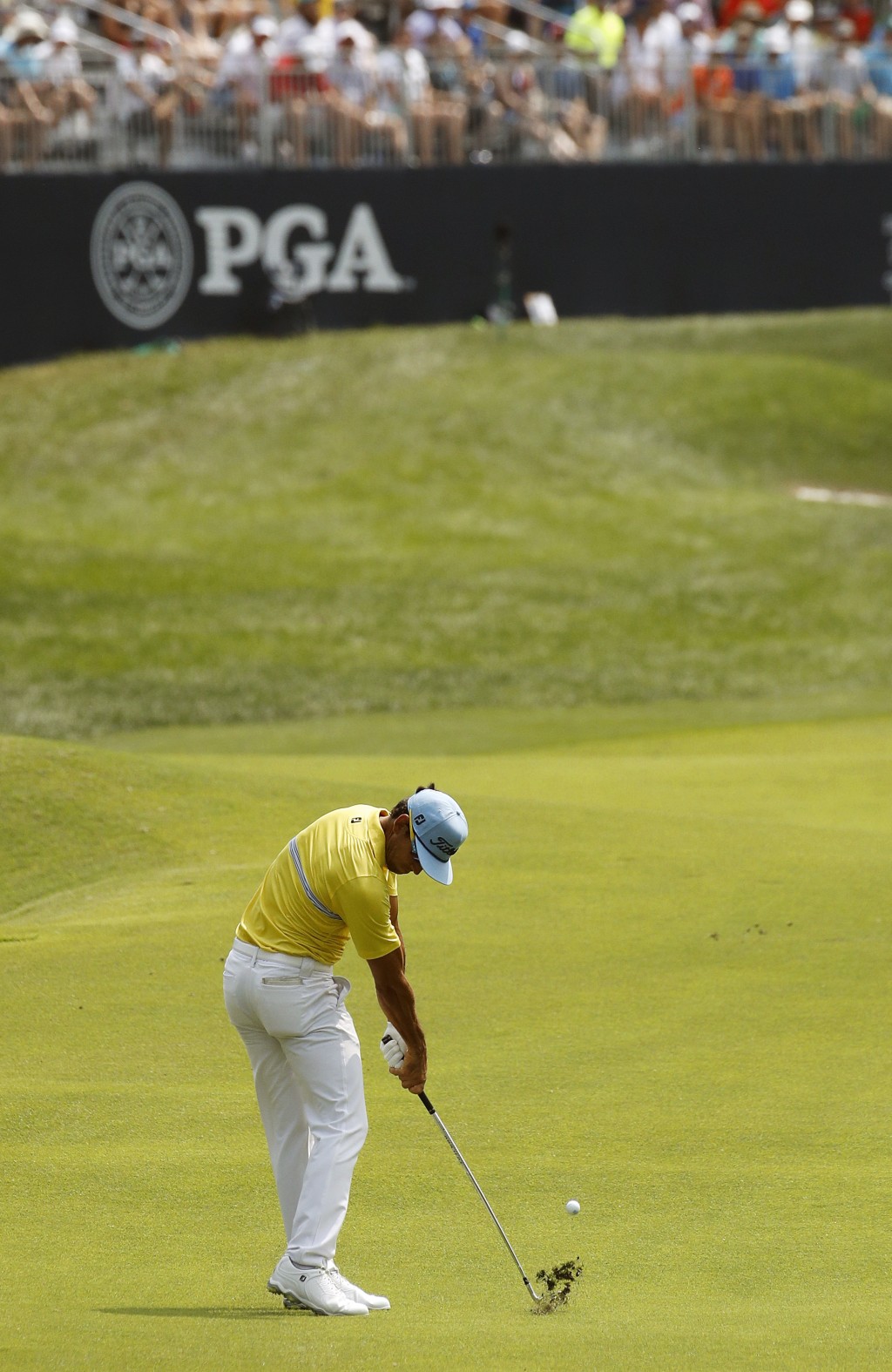 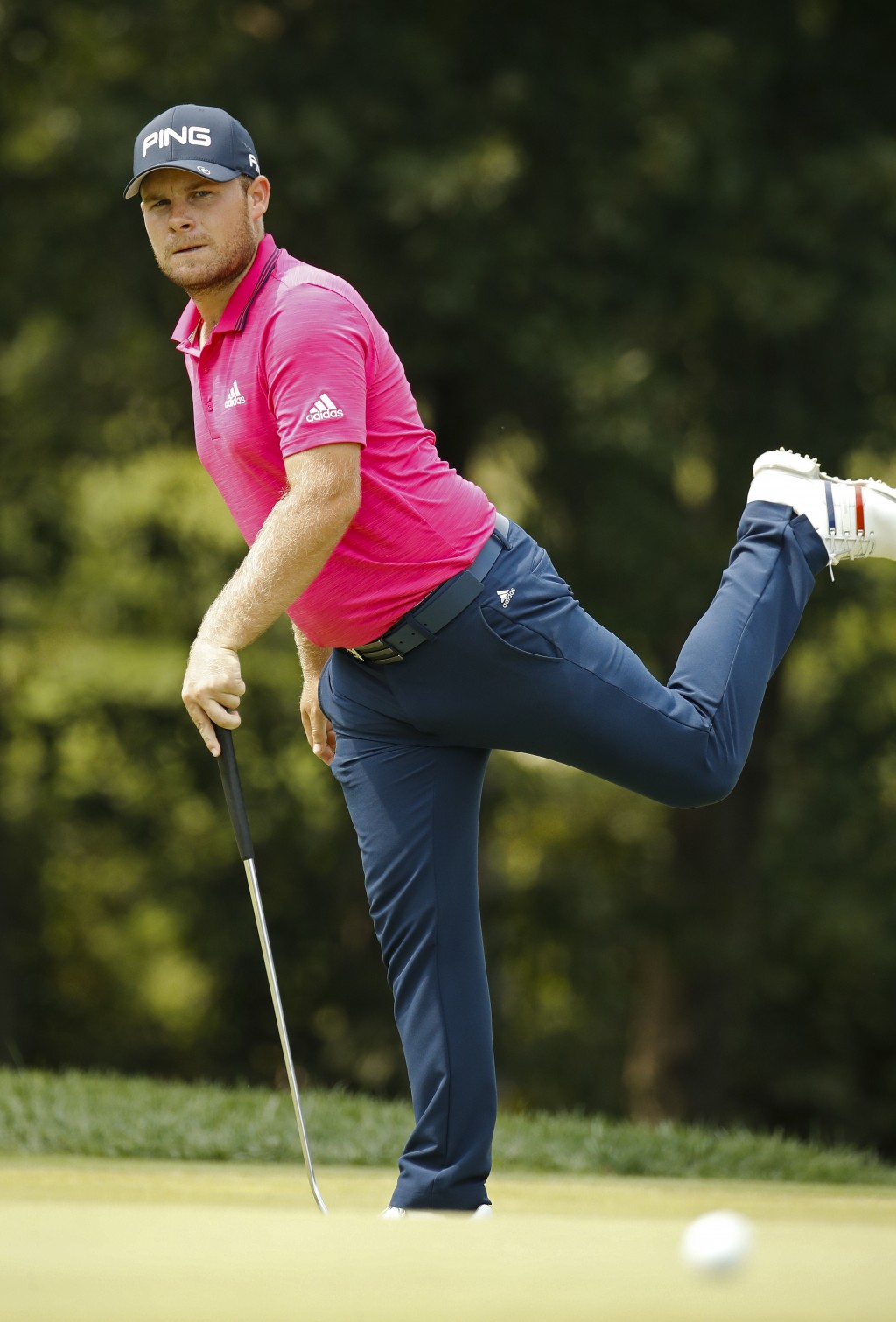 ST. LOUIS (AP) — Justin Thomas didn't lose a whole lot of confidence after a three-putt bogey on the ninth hole. He rebounded with a couple more birdies to start the back nine and get back into contention for his second straight PGA Championship.

The real mistake came on the par-4 14th at Bellerive.

The defending champion had a wedge in his hands from 128 yards and dumped it into a greenside bunker. Thomas wound up making bogey from there, and then added another bogey a couple holes later, effectively ending any chances he had of going back-to-back.

"I don't really know what happened," said Thomas, whose 2-under 68 left him six shots back of winner Brooks Koepka. "I just shouldn't have ever been there. I should have had it inside 10 feet for birdie and, yeah, just kind of killed my momentum."

Thomas came into the week with plenty of momentum after winning a World Golf Championship at Firestone, and it never really abated. He opened with a 69 before a 5-under 65 thrust him into the mix. He added a 68 in the third round to leave himself with work to do on Sunday.

He had a chance, though. And it became a really good chance by the time he made the turn.

"Starting four back and then having a putt to take the lead on No. 9, I couldn't have really drawn it up any better," he said. "I just had a lot of things go wrong on that putt on nine. I didn't play enough break, I hit it too hard, I had a huge spike mark in my line, and I pushed it.

"But like I said, I bounced back fine and I still had a great chance."

Thomas now turns his attention to the FedEx Cup playoffs and the Ryder Cup and the opportunity to turn another good season into a great one.

"Looking forward to the week off and relaxing and getting the body and mind fresh again," he said, "but try to keep this form up because I feel like I'm playing really well."

Brooks Koepka's 18-foot birdie putt on the final hole stopped a few inches short, and then he appeared to break protocol.

Typically, the champion will mark to let his playing partner finish to avoid any early celebration. Adam Scott missed his 15-foot par putt, putting him alone in third.

Koepka said he felt tapping in avoided a distraction because the mark inches from the cup would have been in Scott's line of sight.

Koepka said if the ball was not directly behind the hole, he would have marked it.

Stewart Cink is headed back to the Masters.

Cink last played Augusta National in 2014, the last of his five-year exemption from winning the British Open. He missed by one shot finishing in the top 12, which would have got him in the following year.

But with birdies on the last two holes, Cink closed with a 67 and tied for fourth with Jon Rahm.

The top four and ties from the PGA Championship are invited to Augusta National.

Thomas Pieters put together one of the best charges of the final round until he came to the 17th hole. He was 6 under on the day when his tee shot went right into the water, and then after a penalty drop, his next shot found the creek. His putt spun out of the cup for a double bogey. Pieters had to settle for a 66.

He managed to take positives out of a rough finish. At least he had a chance, and he hasn't been able to say that very often this year.

"It's a tough one to take," he said. "But then again, I've had a very, very rough year-and-a-half, and it's nice to play some good golf now. So I'm quite happy."

Pieters, who made his Ryder Cup debut at Hazeltine by going 4-1-0, is so far back in the European standings that even a victory at the final major would not have been enough to get him among the top eight qualifiers.

He has two events left, in the Czech Masters and in Denmark. Neither offers enough points for him to qualify.

"It's not really in my hands," he said. "If I need a pick, then hopefully I get a pick. But I'm not worried about it."

Rafa Cabrera Bello and Tyrrell Hatton began their final round together more than three hours before the last group Sunday, so far out of contention that nobody paid much attention.

Until they came up the 18th hole with record-setting rounds in the crosshairs.

Both of the European Ryder Cup hopefuls made par at the last to shoot 6-under 64, one off the PGA Championship record, leaving each of them 9 under for the tournament. They were the leaders in the clubhouse much of the afternoon and wound up in a tie for 10th, seven shots behind Koepka's winning score.

"It was obviously a good day," Hatton said. "I missed a lot of putts still, but 6 under and moving in the right direction on a final round of a major is always good."

Ben Kern was assured of being the top club professional at the PGA Championship when he survived to play the weekend, the only one of the 20 that teed it up Thursday to make the cut.

He wound up with a fat paycheck to go with his crystal trophy.

He played so well that Kern set a PGA Championship for club pros. He finished at 277, breaking by two shots the score Jimmy Wright shot in 1969 at NCR Country Club in Ohio. Wright finished fourth that year.

THE VOTES ARE IN

Tiger Woods beat John Daly again, this time in an online vote for the greatest PGA Championship in 100 years.

For the centennial celebration, the PGA of America surveyed media worldwide of the top PGAs over the years, and then set them up in a bracket for fans to vote online as various PGAs were matched against each other.

One finalist was Woods beating Bob May in a three-hole playoff at Valhalla in 2000, making him the first player since Ben Hogan to win three majors in a year. The other was Daly winning in 1991 at Crooked Stick as the ninth alternate, introducing the world to his grip-it-and-rip-it style.

Woods received 53.6 percent of the vote.

Woods was assured a spot in the final. His 2000 win went up against his 1999 win at Medinah and won handily. Daly's victory was chosen over Rory McIlroy in 2012 setting the PGA Championship record for margin of victory when he won at Kiawah Island by eight shots.