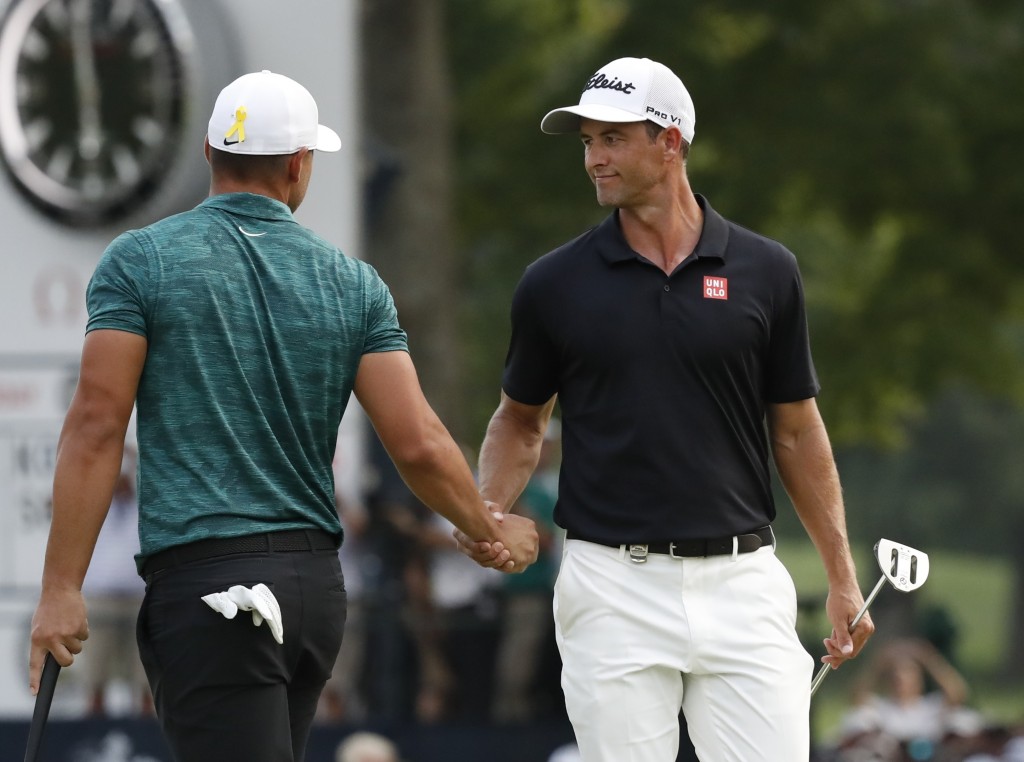 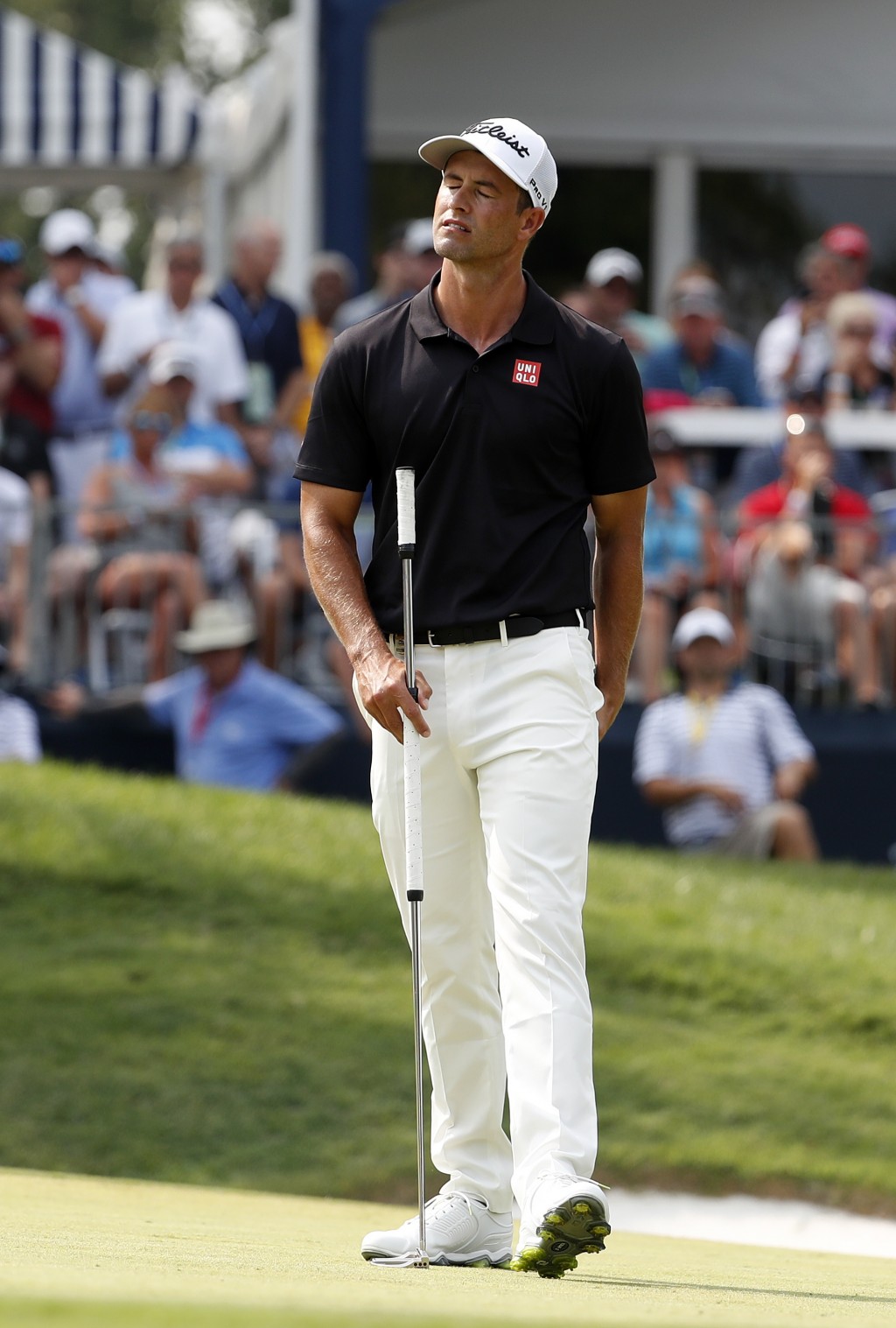 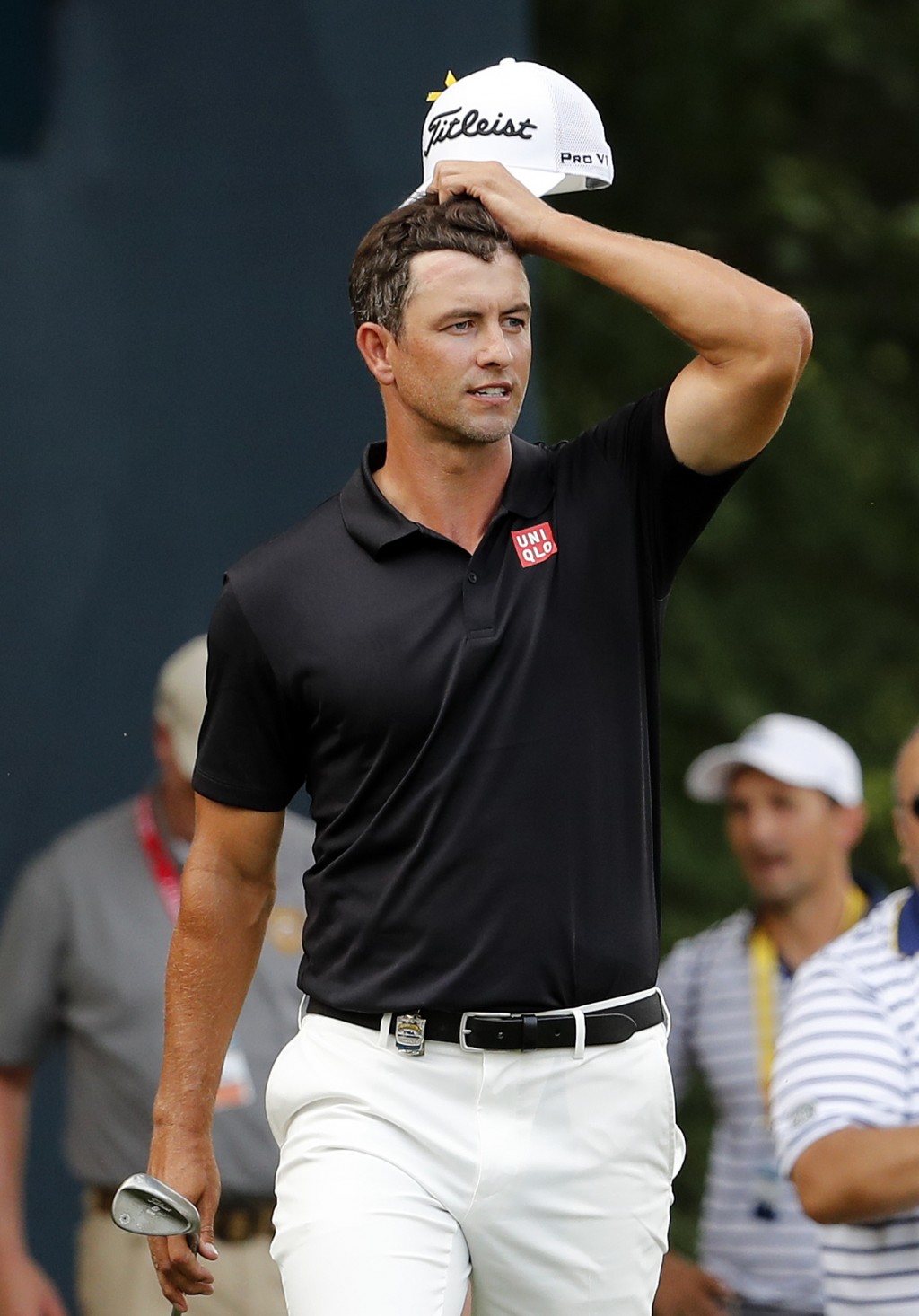 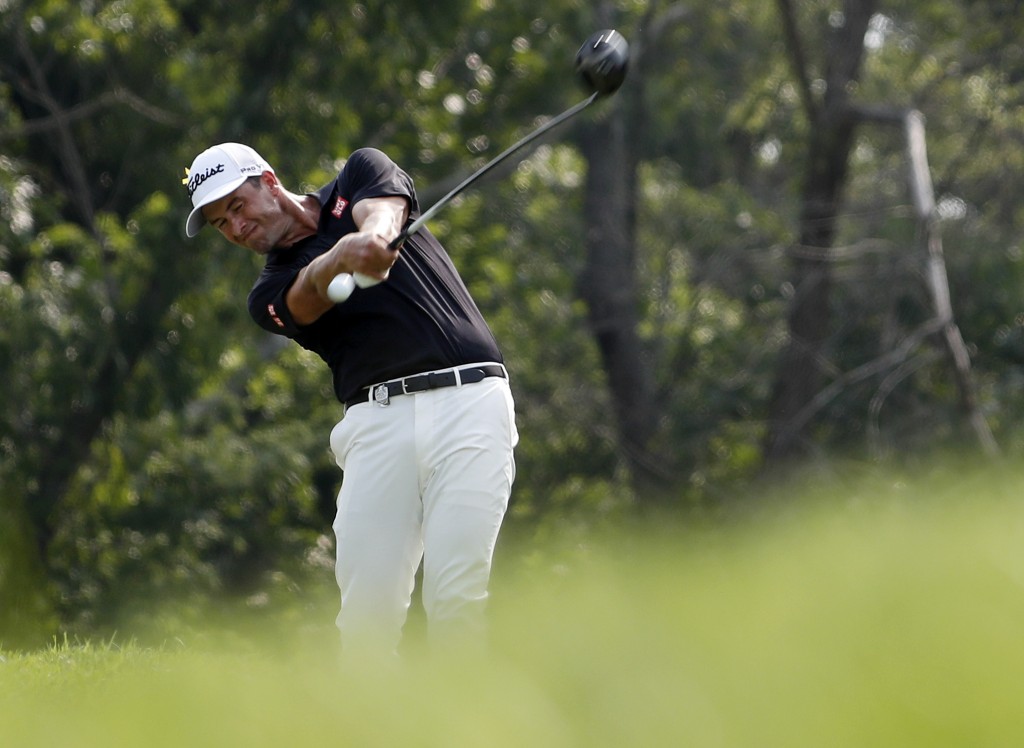 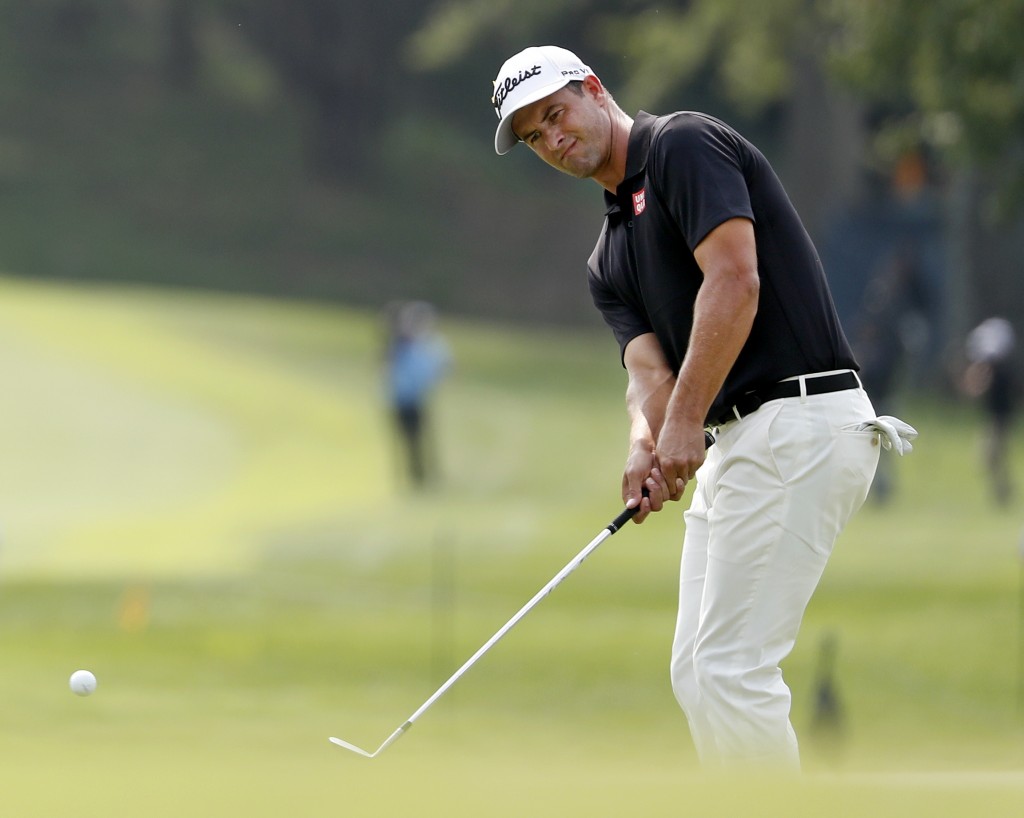 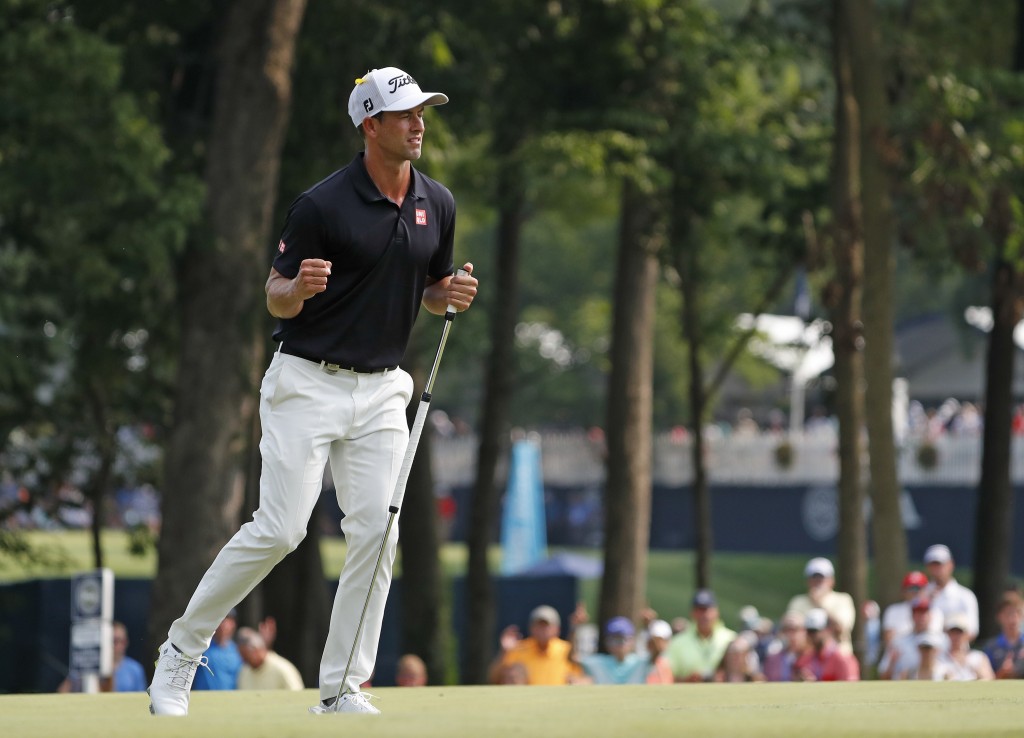 ST. LOUIS (AP) — Adam Scott was poised to pull off a successful sneak attack at the PGA Championship on Sunday, quietly hanging around the top of the leaderboard while all the attention was elsewhere.

Those two kept trading body blows across the front nine at Bellerive Country Club, the roars that Woods was eliciting ahead filtering back to the final group. But after a slow start to his round, including a bogey at the first, Scott proved he had a little fight left. He embarked on a birdie march and briefly pulled into a tie with Koepka.

"I knew what I was up against," Koepka said later, "and Scotty played unbelievably well."

Just not quite well enough.

He missed a couple of birdie chances after forging that tie, and a bogey at 18 left him with a final-round 67. His 13-under total was good for third place, one back of Woods and three off the pace.

"This was some really good golf this week," Scott said with an odd mixture of contentment and disappointment. "It's hard to rationalize everything after leading with four holes to play. You want to win in that position. I feel like I've led a lot of majors with four holes to play and not won them. But shooting 70-65-65-67 is good golf at a major championship."

Scott played all week wearing a yellow ribbon on his hat to honor Jarrod Lyle, the PGA Tour player who died Wednesday after a return of cancer. Fans would occasionally shout his name as Scott walked by Sunday, ensuring his good friend and fellow Aussie was never far from his mind.

"For the people that knew him quite well that were playing this week, golf was probably a little distraction," he said. "But probably now as we get some time off and get to go home and be with our family, we'll be able to celebrate him a little bit more."

Scott will be able to enjoy some newfound confidence, too.

The former Masters champion hasn't won since 2016, his game having fallen apart so mightily that his chances of keeping his PGA Tour playing privileges were in doubt just weeks ago.

He had churned through swing coaches, struggled to adapt to the ban on long putters, and perhaps worse than anything, had lost the mental edge that had carried him to the world's No. 1 ranking.

Yet there he was on Sunday of a major championship, right in the hunt — with Woods, no less. It was almost as if someone had hit the rewind button on the last few years.

"It's not like I forgot what to do playing in the final group of a major," Scott said.

His charge to the top of the leaderboard Sunday began with back-to-back birdies on the front nine and another at the brutally tough par-4 10th. He missed a good chance for birdie at the drivable par-4 11th, but bounced back with two more birdies to put pressure on the contenders.

It wasn't until Scott missed a crucial birdie putt at the par-5 17th, which leaked away just as it reached the hole, that his hopes of winning his second major championship began to fade.

"I got off to a really slow start, so I was not super-comfortable early in the round," Scott said. "I was not hitting the best shots but I scrambled where I needed to. I made a good par putt at the sixth, then birdie-birdie, and that really calmed me down a lot."

He kept his calm despite the roars that were coming from Woods up ahead.

"That was certainly filtering back through the groups," Scott said. "Every leaderboard change no matter what hole you were on, you knew what Tiger did."

It was almost too late before anybody paid attention to what Scott was doing.

"That's better than the last couple of years, for sure," he said. "I don't think it'll be rocket science to figure out the small little bits that are missing, and if anything this is motivation to make the most of this year. Keep playing at this level and go into next year playing with confidence. I didn't really start that way this year. That would be a good way to start."