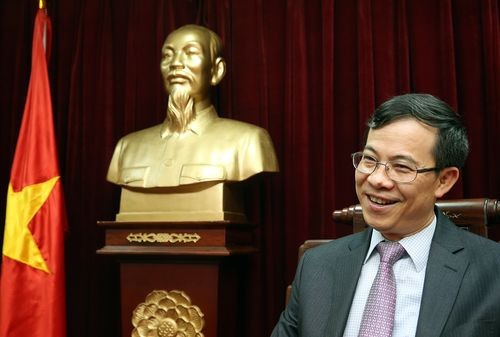 Taipei, Aug. 12 (CNA) Vietnam's outgoing top envoy to Taiwan on Friday called on Taiwan's government to invest in his country's infrastructure and share its expertise with the developing country which is in need of more upgrades in this field.

During an interview with CNA on Friday, Tran Duy Hai (???), the head of the Vietnam Economic and Cultural Office in Taipei, who is scheduled to leave his post later Sunday, praised the success of Taiwan's New Southbound Policy in forging closer cooperation with members of the Association of Southeast Asian Nations (ASEAN).

Asked to comment on what Taiwan and Vietnam have been working on under the policy initiated since President Tsai Ing-wen (???) came into office in May 2016, Tran pointed out education, healthcare and agriculture.

He said one area he wished both sides could work on more was transportation infrastructure.

Tran said President Tsai pledged in late 2017 that her government will establish a US$3.5 billion fund to help countries covered by Taiwan's New Southbound Policy with their infrastructure and major development projects.

"Vietnam would very much welcome that some of the budget can be used in its infrastructure construction," Tran noted.

Praising Taiwan as a model in the region for building transportation infrastructure, with sound technology, experience and funding, the representative said Vietnam is in dire need of assistance in this area, and would especially welcome Taiwan's investments in building highways, airports and ports.

Vietnam also could benefit from Taiwan's experience in healthcare, he said. His country needs more hospitals to meet its patients' demands. The existing hospitals also are in need of a major boost to its technology and skills, he noted.

Tran welcomed more Taiwanese hospitals to place investments in Vietnam, while disclosing that the two sides could sign an MOU on medical cooperation soon.

Recalling his three years in the office that serves as a de facto Vietnamese embassy in Taiwan, Tran said he has been pushing for closer bilateral exchanges during his tenure which started in March 2015.

Now the Vietnam-based budget airline VietJet Air operates the most flights between Vietnam and Taiwan, with a total of seven routes; namely, from Ho Chi Minh City to Taipei, Taichung, Tainan, and Kaohsiung, as well as Hanoi to Taipei and Taichung and Kaohsiung.

In terms of educational exchanges, Tran said when he first arrived in Taiwan three years ago, there was fewer than 5,000 Vietnamese students studying on the island. Now the number has significantly increased to 7,500.

"Education exchanges are the foundation for bilateral cooperation," he said, adding that Vietnamese students studying in Taiwan would gain first hand knowledge about the island and learn Chinese before becoming a bridge to enhancing closer two-way exchanges after they gradate and return home.

According to Tran, Nguyen speaks fluent Mandarin Chinese and had been posted in Taipei in the 1990s in the Vietnamese office and thus has deep knowledge of Taiwan-Vietnam relations.