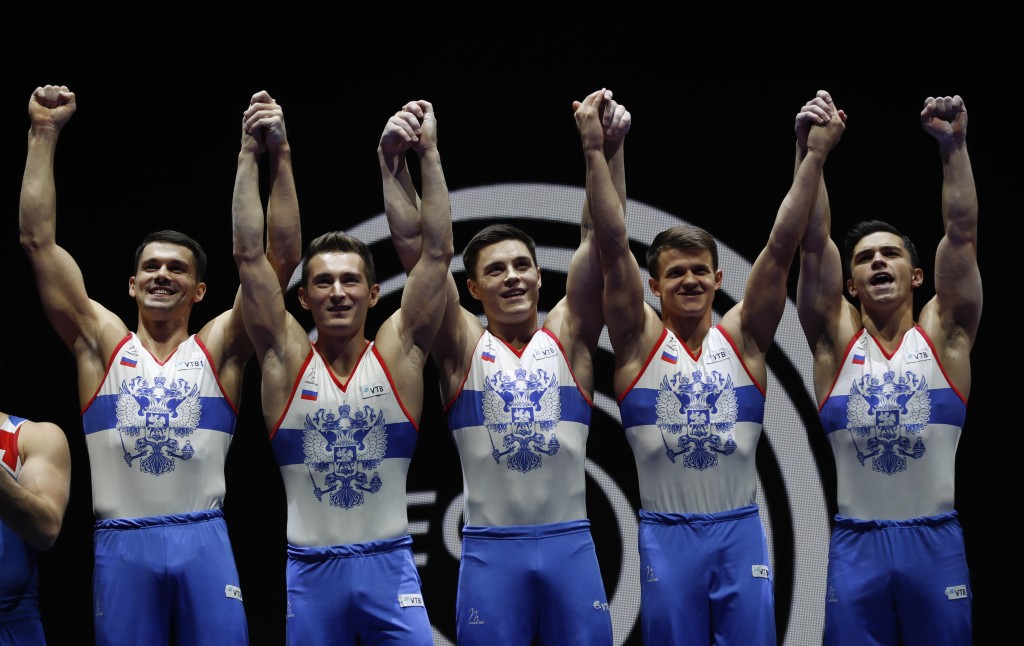 A day after Russia badly struggled on the apparatus in qualification, Nagornyy avoided risks in an unspectacular but solid routine for 13.966 points. The score raised his team's total to 257.260, nearly four points clear of runner-up Britain, and more than 10 ahead of third-place France.

Trailing Russia by just over one point at the last rotation, Britain failed in its quest for gold after both Dominick Cunningham and James Hall lost grip during their high bar exercises.

Britain was the last team to beat Russia at European team championships, in Montpellier in 2012.

With Nagornyy, David Belyavskiy and Nikolai Kuksenkov, Russia fielded three gymnasts from the team that won silver at the 2016 Olympics, making it a strong favorite to land its third straight European title.

However, it got off to a slow start as Nagornyy failed to score 14s on floor and pommel horse, as did Dmitrii Lankin on the rings.

Russia gradually took control and performed near flawlessly on the parallel bars as both Belyavskiy and Artur Dalaloyan scored over 15.4, setting up the showdown for the title with Britain on the high bar.

"When you win, it doesn't matter how many points you win. We did what we needed to win," Kuksenkov said. "Today we made mistakes that we shouldn't have made. The grip on the high bar was very bad and you will have seen a lot of mistakes on the high bar in this competition, because of the grip. We used a little bit more chalk."

Appearing in its first major team final, Turkey came close to an upset as it led the competition after three of six rotations.

However, it lost sight of a medal and dropped to fifth place after Ahmet Onder stumbled at the end of his floor exercise, scoring just 11.833 points, and the team ultimately placed seventh.

In other events, the Netherlands won the mixed team relay in open water swimming at Loch Lomond for its fourth gold from as many events.

Olympic champion Ferry Weertman edged Germany's Florian Wellbrock by 0.6 seconds for the title, while France was 11.7 behind for bronze.

There was another gold medal for the Netherlands in the women's BMX final as Laura Smulders defended her European title, two months after also winning the world title.

Kyle Evans won the men's race ahead of Kye Whyte for a British 1-2 finish.