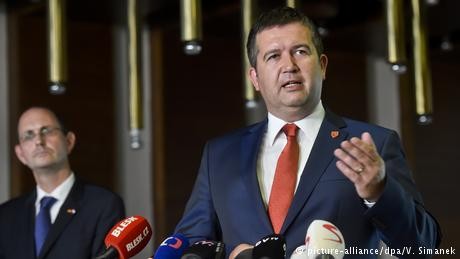 The Czech Republic has negotiated the release of two workers of a German non-governmental organization.

Czech Foreign Minister Jan Hamacek traveled to Damascus to bring back the humanitarian workers, his office said in a statement on Thursday.

The two men were arrested several months ago near the Iraqi border on charges of entering Syria without the necessary papers, Czech media reported.

The Czech Republic is the only country in Europe that maintains diplomatic ties with war-torn Syria. Its embassy in Damascus provides consular services for European Union citizens and acts as intermediaries for other countries.

"I am glad that we have been able to negotiate the release of these two humanitarian workers, and that both of them are in a good physical and mental health," Hamacek said.

"This once again underlines the important role the Czech Embassy in Damascus has been playing over the past few years, for the benefit of EU countries and for other states as well," he said.

A German Foreign Ministry spokeswoman welcomed the minister's personal involvement in the case, and said the return of the two workers could not have been possible without the "quick and unbureaucratic help of our Czech friends."

She said one of the workers was a German national. The nationality of the other worker was not disclosed.