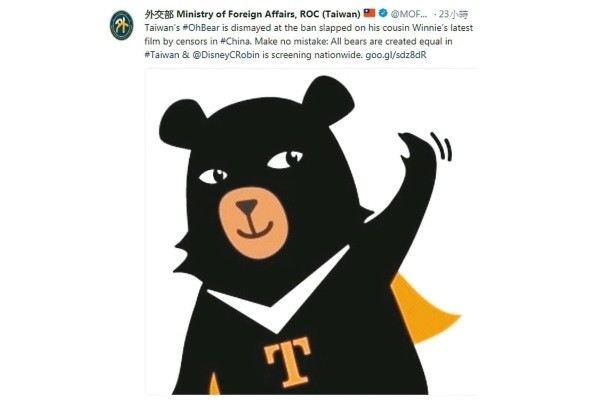 TAIPEI (Taiwan News) -- A tongue-and-cheek tweet posted by the Ministry of Foreign Affairs (MOFA) on Tuesday (Aug. 7) mocking China's banning of the latest Winnie the Pooh film with the mascot OhBear (喔熊), gained attention from CNN which published a front page story the subject yesterday.

In a news article posted yesterday by CNN titled "Taiwan mocks Beijing over New Winnie the Pooh film," the news agency described the move as an attempt to "highlight its greater freedom of expression compared to the mainland, at a time when the two governments are locked in a furious battle over the island's status."

Indeed, when asked by reporters why the tweet had been posted, a MOFA spokesman Andrew Lee (李憲章) said yesterday the ministry did so to emphasize that "Taiwan is a democratic nation with freedom of speech."

However, the ministry later took the tweet down in order to "avoid any misinterpretation."

On Aug. 3, news broke on the Hollywood Reporter that China had banned the live-action Disney movie featuring Pooh, "Christopher Robin," possibly because of its campaign against comparisons between China's rotund President Xi Jinping (習近平) and the chubby little cubby all stuffed with fluff.

In response, MOFA posted a tweet on Aug. 7 which claimed that OhBear was "dismayed" by the ban on his cuddly "cousin Winnie" in China. The tweet, which gained over 400 likes, also poked fun at China's grisly human rights record by emphasizing that Taiwan treats all bears equally (cartoon or otherwise) and proudly boasted that the film "Christopher Robin" is showing in theaters across Taiwan. The following is the full text of the tweet:

Taiwan’s #OhBear is dismayed at the ban slapped on his cousin Winnie’s latest film by censors in #China. Make no mistake: All bears are created equal in #Taiwan & @DisneyCRobin is screening nationwide. https://t.co/97cEdcszXQ pic.twitter.com/FKinxXJwpk