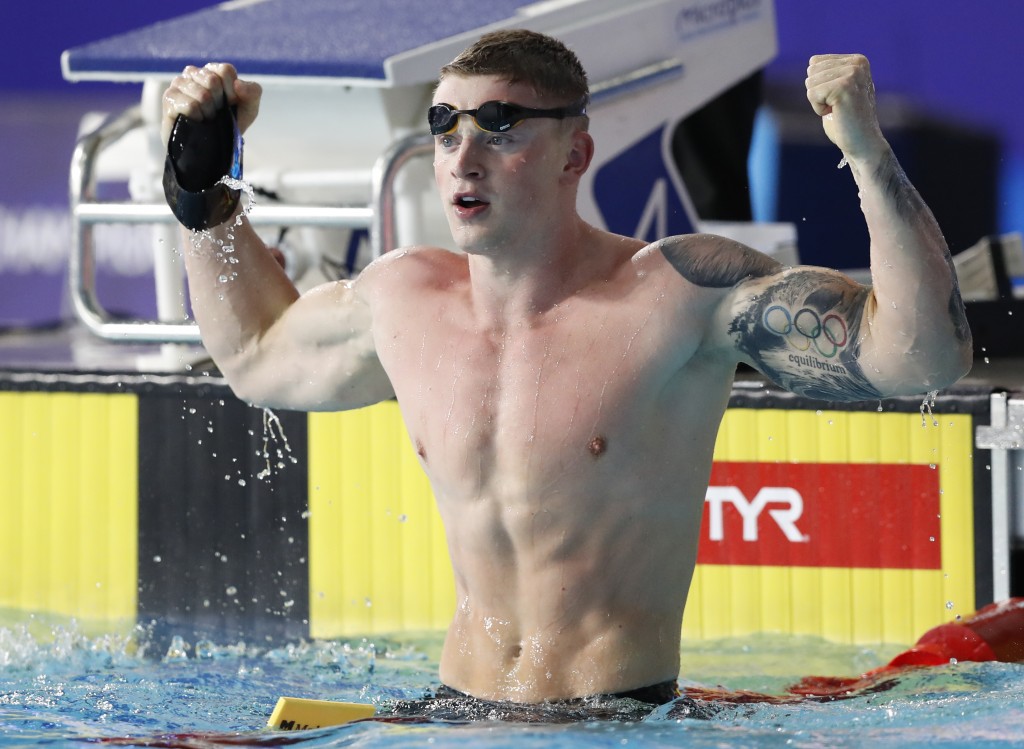 GLASGOW, Scotland (AP) — Swimmer Adam Peaty remained on course for a clean sweep at the European Championships after easily winning the men's 50-meter breaststroke on Wednesday.

The Olympic champion will leave the competition with four golds from as many events if he can help Britain take the title in Thursday's men's 4x100 medley relay.

Four days after setting a world record in the 100 breaststroke, Peaty broke the championship record in the 50 again, having already done so in qualifying.

Leaving the field seven tenths of a second behind, he shaved another 0.14 off his previous mark to finish in 26.09 seconds, 0.14 short of his world record from last year's world championships.

"Execution was probably 9.5 out of 10 but the race itself was 10 out of 10," Peaty said. "Missed a few strokes, maybe it cost me zero point zero something."

Winning a quartet of gold medals at European Championships is nothing new to the 23-year-old Briton, having done it twice before. He triumphed in the 50 and 100 breaststroke as well as the men's and mixed medley relays in Berlin in 2014 and again in London two years ago.

To repeat the feat at the Tollcross arena would still be special to him.

"People don't realize how much home crowd means to us," Peaty said. "When you get out there and it is absolutely roaring, that's the kind of stuff that gives us 10 percent extra."

Peaty's gold medal haul put an end to the doubts that crept into his mind following the Commonwealth Games four months ago, where he lost his four-year unbeaten record in the 50 breaststroke to South Africa's Cameron van der Burgh.

Regardless the outcome of Thursday's relay, Peaty said the event had made him confident going into next year's world championships in Gwangju and, ultimately, the Tokyo Olympics in 2020.

"Next year is looking very strong, very good technique-wise, very good power-wise," Peaty said. "I'm looking forward to South Korea, hopefully getting around that mark again. It's a great position to be in now."

Sweden's Sarah Sjostrom also won her third gold of the championships. After triumphing in the 50 freestyle and the 100 butterfly, she added the 100 freestyle title by seeing off Femke Heemskerk of the Netherlands, who won her fourth silver medal.

Also, Evgeny Rylov won the 200 backstroke in a European record of 1 minute, 53.36 seconds, while Mykhaylo Romanchuk of Ukraine took the men's 800 freestyle title by beating 2016 champion Gregorio Paltrinieri of Italy.

In road cycling, Victor Campenaerts of Belgium defended his title in the men's time trial, while Dutch rider Ellen van Dijk maintained her unbeaten record by winning the women's competition for a third year in a row.

Campenaerts used a frenetic sprint on the closing 300 meters of the 45.7-kilometer race to edge 2016 champion Jonathan Castroviejo of Spain by 0.63 seconds. Germany's Maximilian Schachmann was 27.38 behind for bronze.

Van Dijk has won every European time trial title since the event was added to the calendar in 2016.

"It's an incredible thing if I think about it. I am super happy with that," Van Dijk said.

On the first day of open water swimming, Kristof Rasovszky of Hungary and Sharon van Rouwendaal of the Netherlands won the 5K titles.

Rasovszky beat the French duo of Axel Reymond and Logan Fontaine in the men's event, while Van Rouwendaal, who is the Olympic 10K champion, dominated the women's event for her first major title on the shortest distance.

The 10K races are scheduled for Thursday.