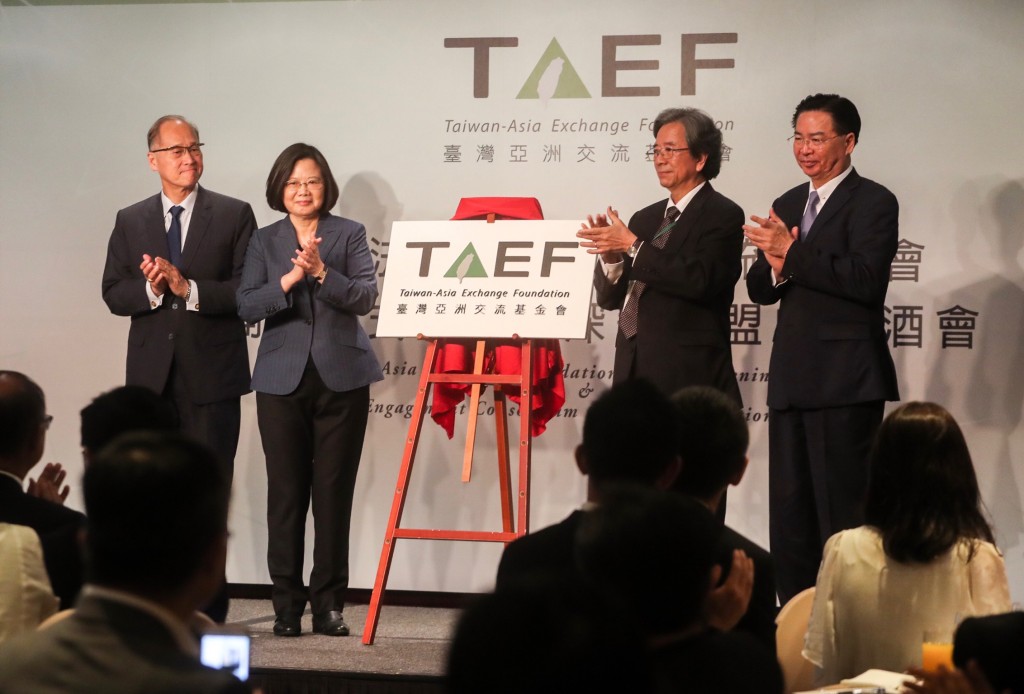 TAIPEI (Taiwan News) — President Tsai Ing-wen (蔡英文) said Wednesday that as Asia goes through various transformations, Taiwan needs to closely follow the development of the entire region, and that the government's New Southbound Policy serves as an important step for the country to re-form its strategy for Asia.

The Taiwan-Asia Exchange Foundation (TAEF), the first public-funded think tank dedicated to promoting the New Southbound Policy and facilitating exchanges between Taiwan and its neighboring countries, was inaugurated in Taipei on Wednesday morning.

President Tsai began her remarks by saying that over the past two years, the New Southbound Policy promoted by her administration has seen substantial results in terms of trade and investment, agriculture, technology, education, and other fields.

The establishment of the TAEF not only marked a milestone for the policy efforts, but also shows that we will integrate private efforts and pool more resources to continue strengthening exchange and cooperation between Taiwan and the New Southbound Policy’s target nations, said the president.

President Tsai also laid out two core missions for the foundation, including organizing the annual Yushan Forum, which was initiated in 2017 as a platform for regional dialogue. “Through holding the Yushan Forum, the importance of Taiwan and its successful stories will be seen by the international community.”

The other responsibility for the TAEF is to promote the government’s New Southbound Policy through people-to-people exchanges, including building ties among domestic and overseas think tanks, fostering the development of young leaders, and promoting cooperation among NGOs. “As Asia continues to go through political, economic, and societal transformation, Taiwan needs to closely follow the development of the entire region,” said President Tsai.

TAEF Chairman Hsiao Hsin-huang (蕭新煌) said the foundation will be a platform converging private and public efforts and resources with the aim of facilitating and streamlining cooperative relationships between people and organizations of Taiwan and the New Southbound Policy’s target countries.

The establishment of the TAEF is administered by the Ministry of Foreign Affairs with a budget of NT$38.88 million (US$1.25 million).

Following the inauguration, the TAEF also announced the establishment of the Asia Engagement Consortium (AEC), an alliance combining six private and public institutes that will be devoted to developing Taiwan’s ties with neighboring countries on social and cultural affairs.