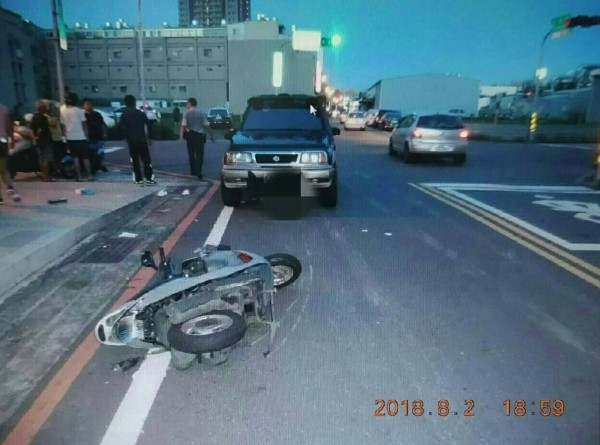 TAIPEI (Taiwan News) -- A four-year-old girl was killed and her mother seriously injured just 200 meters from reaching their home in Tainan when a driver high on Ketamine plowed into the back of their scooter last night (Aug 2), reported CNA.

A 42-year-old mother, surnamed Su (蘇), was driving her scooter on Yudeyi Street with her four-year-old daughter riding on the back at 6 p.m. last night in Tainan's North District. When they reached the intersection of Yudeyi Street and Wencheng Road, an SUV suddenly smashed into them from behind.

The young girl fell off the scooter and her head was crushed under the right rear wheel of the SUV, while Su became stuck under the vehicle which dragged her for another 10 meters. Paramedics found that the girl's skull had been ruptured, she was bleeding profusely and was not showing any vital signs.

The mother and daughter were rushed to Chi Mei Medical Center, but the four-year-old girl was declared dead half an hour after arriving at the hospital. Su suffered severe injuries, including intracranial hemorrhaging and is in the intensive care unit.

The girl's father, who was working in Taoyuan at the time of the accident, arrived at the hospital to see his wife that evening and was devastated to hear the news of the loss of his daughter.

According to an initial police investigation, the driver was identified as a 25-year-old man surnamed Kuo (郭), who had a history of public endangerment and three previous drug offenses. Kuo claims to be a cement worker and in 2015 had his driver's license revoked, and at the time of the accident was driving without a license.

At the scene of the accident, police reported the interior of Kuo's vehicle having a strong smell of Ketamine.

Inside Kuo's SUV, police found over 10 grams of Ketamine, 77 grams of MDMA (ecstasy), 9 drug-laced packets of coffee, 56 grams of "Red Beans" (a new type of drug), 17 grams of an unidentified powder, along with other Ketamine-related paraphernalia, reported Apple Daily. Due to the large quantity and types of drugs, as well as Ziploc bags and scales, police suspected that Kuo is a drug dealer, but he denied the accusation, according to the report.

Though a breathalyzer test showed Kuo's blood alcohol level was 0, he tested positive for Ketamine after a urine test was administered.

Kuo confessed he was driving while using Ketamine, he did not see Su and her daughter and does not know how he hit them. He said that the drugs in the vehicle had been purchased in Kaohsiung.

Police transferred Kuo to the Prosecutor's Office on charges of violating the Drug Control Act and negligent homicide.