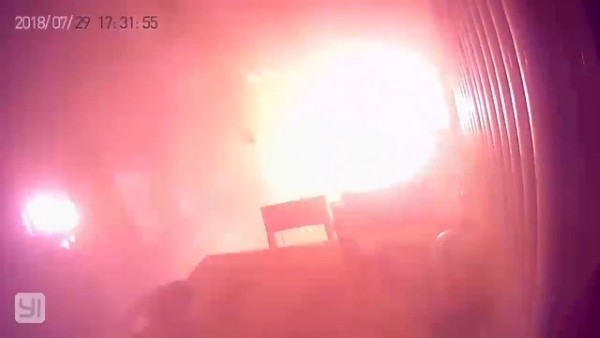 TAIPEI (Taiwan News) -- Video surfaced on July 29 showing a father and daughter narrowly avoiding severe injury or death seconds before their electric scooter explodes into a ball of fire in their house in China.

In the video, which spread like wildfire on Weibo, Facebook and YouTube, a father and his daughter are sitting on a coach, when their electric scooter, which is charging, suddenly makes a popping noise startling their pet dog. White smoke starts rising from the scooter and the man quickly leaps up to unplug the device, but even more smoke starts to spew out and quickly fills the room. Scooter as it starts to emit smoke. (Screenshot of Weibo video)

The father, daughter and dog make a hasty retreat as smoke billows out of the scooter and it soon erupts into a violent explosion, with a ball of fire rising from where the gadget once stood. According to Chinese media reports, no one was injured in the blast and the name of the Chinese manufacturer of the scooter has not yet been released. Police are still investigating the exact cause of the explosion. Similar explosions have become commonplace in China, with many caused by inferior quality lithium-ion batteries. Scooter erupts into ball of fire. (Still of Weibo video)

In response to the video, many Taiwanese netizens mocked shoddy Chinese design and workmanship:

"The pride of the made in China universe."

"This explosion could really frighten people to death."