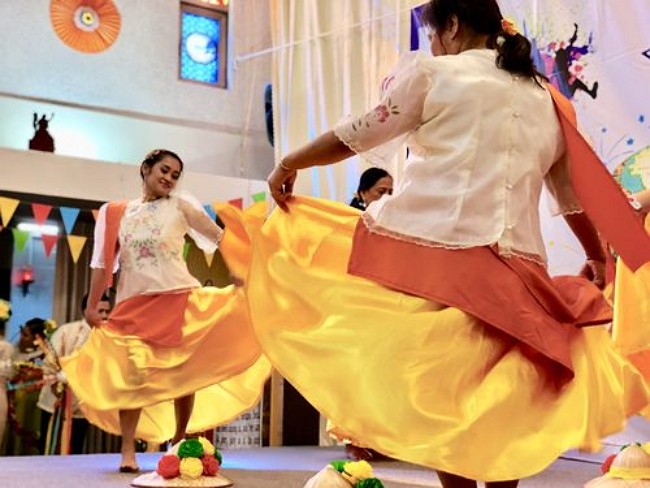 A series of fun-filled events unfolded as rock band Silicon Popcorn took the stage and blew the audience away with popular songs including "Bring Me to Life" by American rock band Evanescence and "Shy Guy" by Jamaican recording artist Diana King.

Filipino culture was also showcased at the event as the church held a folk dance competition of 11 dance groups.

Dance group number 8, the Filipinos Married to Taiwanese Association (FMTA), won the competition with their performance of "Sayaw sa Cuyo remix with Tinikling," of which Sayaw sa Cuyo was said to be a girl dance where handkerchiefs are used to emphasize their twirls and turns and Tinikling was a dance that imitates the movements of birds. The Tinikling dance originated in Leyte, an island in the Visayas group of the Philippines.

Another rock band that performed, a band from SCC, rocked the house as members of the audience, including Tatung University President Her Ming-guo (何明果) and Taipei City Foreign and Disabled Labor Office Director Yeh Hsiu-shan (葉琇姍), stepped out to dance in front of the stage.

The event wrapped up after the winners of a pageant contest for "Mr. & Ms. Barrio Fiesta" were announced.

Mark Edward Ganal, 23, from Calamba, Laguna and Mera Luna Mejos, 28, from Misamis Oriental, were honored with the titles of Mr. and Miss Barrio Fiesta, respectively.

Asked about the meaning behind the pageant, SCC Parish Priest Fr. Franco Lacanaria, CS (Congregation of Scalabrini) said those selected will represent the ideals of the community, demonstrating that they have the support, respect and confidence of those who select them.

Lacanaria, who has served at the church since Jan. 1, 2016, said it was built by Americans and opened in July 1958 for the religious services of the United States military stationed in Taiwan at the time.

Over the past 60 years, the church has been a place of worship for local people as well as migrants, Lacanaria pointed out, adding that it has given shelter to migrant workers as well as provided a space for them to socialize.

The church has many members from different countries, including those who come from different regions with different dialects in the Philippines. They all have a common ground -- the church, Lacanaria said.

"It is a good celebration because we are here in a beautiful place provided to us by the Taiwan church," Lacanaria said, adding "we are strangers but we feel welcome here and this house has become our home away from home."