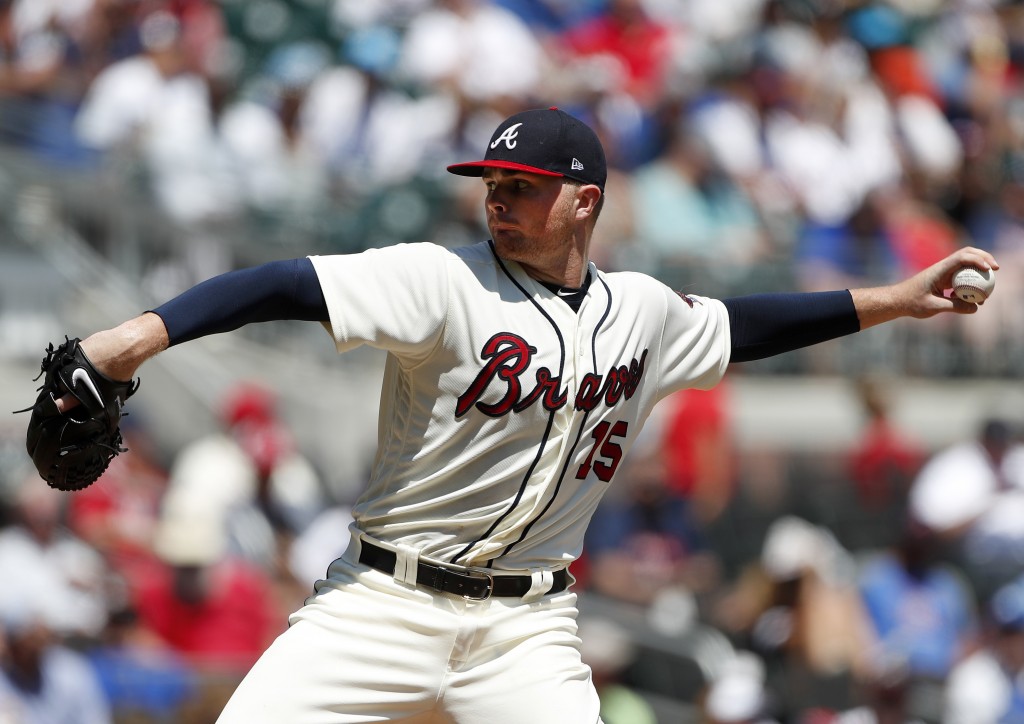 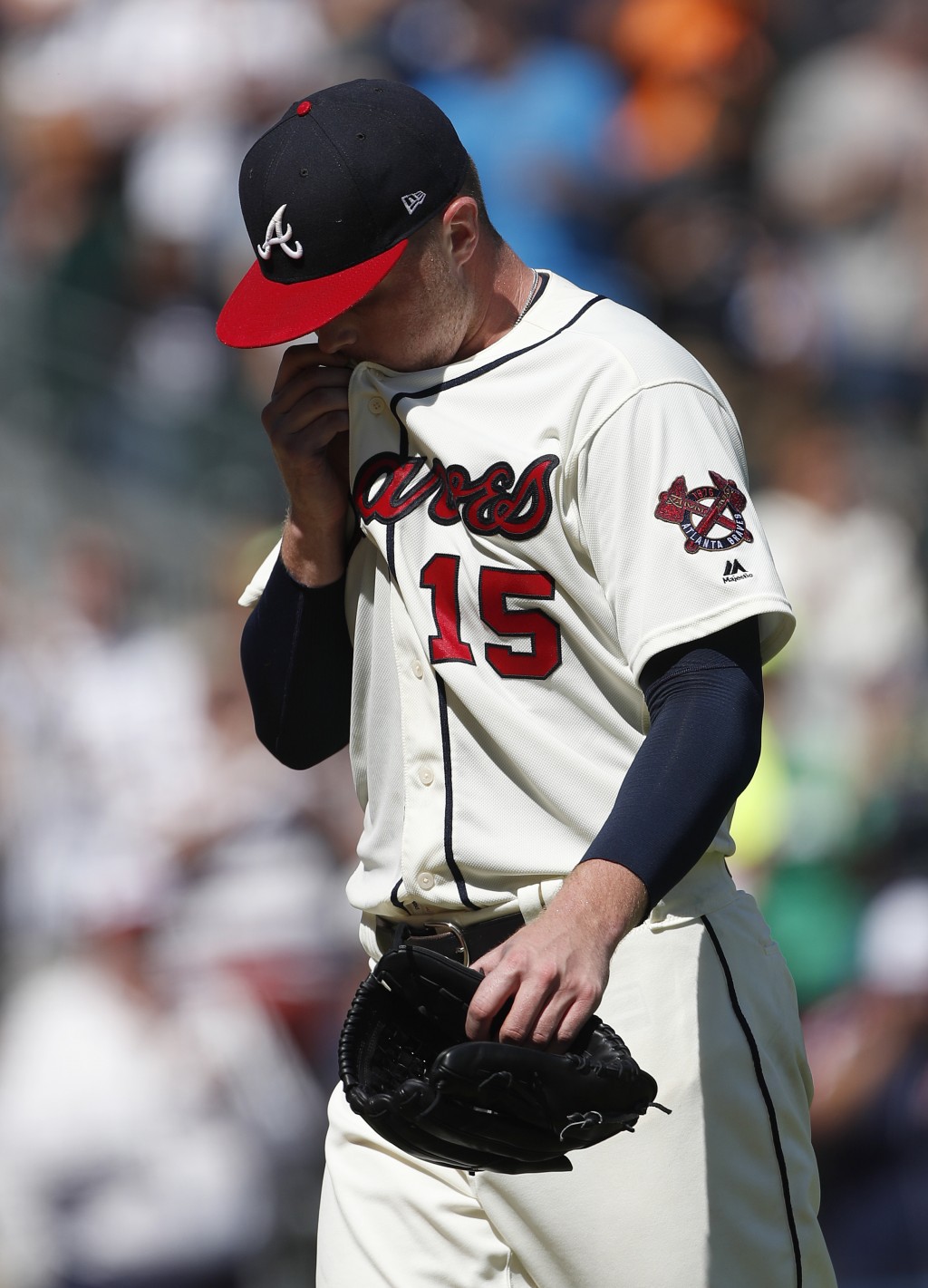 ATLANTA (AP) — Sean Newcomb came within one strike of pitching the first no-hitter by the Atlanta Braves since 1994, denied when Chris Taylor sharply singled in a 4-1 win over the Los Angeles Dodgers on Sunday.

Newcomb had a 2-2 count with two outs in the ninth inning when Taylor hit a hard grounder beyond the reach of diving third baseman Johan Camargo. That came on the career-high 134th and final pitch by the 25-year-old lefty.

Newcomb (10-5) left to a thunderous standing ovation from the sellout crowd at SunTrust Park as manager Brian Snitker removed him. Snitker took the ball and gave it back to Newcomb as a keepsake — instead, Newcomb simply tossed it toward the Atlanta dugout as he walked off, wanting no souvenir of the near-miss.

Newcomb apologized about an hour after the game for racist, homophobic and sexist tweets he sent as a teenager, calling them "some stupid stuff."

Ross Stripling (8-3) was subpar in his second straight start, allowing four runs, seven hits and one walk with five strikeouts in four innings.

BOSTON (AP) — Nathan Eovaldi pitched seven impressive innings in his first start with Boston, J.D. Martinez drove in all three runs to increase his major league-leading RBI total to 89 and the Red Sox beat Minnesota for their 18th victory in 22 games.

Martinez had a double, single and walk, and Andrew Benintendi added two hits and a walk for the Red Sox. The AL East-leaders improved to a majors' best 74-33 by winning three of four in the weekend series.

Acquired in trade from Tampa Bay for a minor league pitcher on Wednesday, Eovaldi (4-4) gave up four hits, striking out five without issuing a walk. Matt Barnes pitched the eighth and Craig Kimbrel got the final three outs for his 33rd save.

Jose Berrios (10-8) was in trouble every inning, giving up three runs on nine hits with three walks and five strikeouts in 4 2/3 in his first career start in Fenway Park.

Three days after New York acquired the 35-year-old left-hander from Toronto for infielder Brandon Drury and outfield prospect Billy McKinney, Happ took a shutout into the fifth before Salvador Perez's opposite-field home run into the Yankees bullpen in right-center. Happ (11-6) struck out two and walked one, and the first-time All-Star ended a four-start winless streak.

Aaron Hicks hit a two-run homer in the first off the screen attached to the right-field foul pole, a drive off Burch Smith (1-2). Hicks also doubled, singled and walked for the Yankees, who took three over four against the woeful Royals (32-73), who traded star third baseman Mike Moustakas to Milwaukee on Friday.

HOUSTON (AP) — Jurickson Profar hit a go-ahead double deflected by the pitcher and stayed in despite getting kicked in the face as Texas became the first team to sweep Houston this year.

Texas took three in a row from the AL West leaders and extended the Astros' skid to a season-high four games.

The last-place Rangers won even though they struck out 19 times — the most Houston pitchers have recorded in a nine-inning game in franchise history.

It was 1-all in the sixth when Rougned Odor doubled and Profar hit a grounder nicked by Lance McCullers (10-6) that rolled into the outfield. Astros second baseman Yuli Gurriel lost his balance and kicked Profar in the cheek with his cleats as he slid into second base.

Mike Minor (7-6) allowed four hits and two runs while striking out eight in six innings for his first win since June 27. Keone Kela allowed a run in the ninth before retiring George Springer with two on to get his 24th save.

Marquez (9-8) returned from paternity leave to deliver 7 2/3 solid innings and help the Rockies win for the 11th time in 13 games. He allowed two runs on five hits and struck out eight. He left to a standing ovation after fanning Nick Martini.

Khris Davis and Matt Chapman homered for the A's, who lost just their first series in their last 12. Oakland had won six straight games before being swept in Colorado.

Wheeler (5-6) allowed five hits with seven strikeouts and one walk, and got his fourth RBI of the season on a double in the fifth. He won a third straight start after giving up a combined six runs in 14 2/3 innings over his past two.

The Mets split the four-game series with the Pirates, who lost for just the fourth time in their past 19 games.

Wheeler's double helped his own cause after Luis Guillorme singled with two outs. He sent a drive off Joe Musgrove (4-5) over right fielder Gregory Polanco to score Guillorme from second.

DETROIT (AP) — Yonder Alonso, Melky Cabrera and Edwin Encarnacion all homered for Cleveland, and Corey Kluber pitched into the eighth inning in a victory over Detroit.

Rajai Davis added a triple and two doubles for the Indians, who took two of three in Detroit and extended their AL Central lead to nine games over Minnesota. It's the largest division lead in the major leagues at the moment.

BALTIMORE (AP) — Adam Jones had three hits and an RBI in what could be his final game with the Orioles, and Baltimore beat Tampa Bay for a rare series win.

The rebuilding Orioles are looking to deal Jones before Tuesday's non-waiver trade deadline. Now in his 11th year with Baltimore, the 31-year-old center fielder becomes a free agent after the season.

Jones is on a tear, batting .417 during a nine-game hitting streak. He went 3 for 4 with a walk and notched his 85th stolen base with the Orioles, moving him into a tie for 10th place with Don Buford on the franchise list.

Chris Davis hit a pair of two-run homers, and Austin Wynns and Jonathan Schoop also connected for the Orioles.

SAN FRANCISCO (AP) — Buster Posey had four hits, including a three-run double to help San Francisco break out of a collective funk, and the Giants beat Milwaukee to avoid a four-game sweep.

Pablo Sandoval added a two-run triple before leaving with a possible hamstring injury, Gorkys Hernandez hit his 12th home run and Evan Longoria had a sacrifice fly, his first RBI since spending more than a month on the disabled list.

San Francisco had been held to two or fewer runs in 11 of its 22 games in July before breaking out against Milwaukee starter Junior Guerra (6-7) in the third.

Phillip Ervin and Curt Casali each had an RBI and run for the Reds, who won a four-game series against the Phillies for the first time in nearly 21 years.

Castillo (6-8) allowed four hits and walk with a season-high nine strikeouts to earn his first decision in six starts since a 6-3 win over the Cubs on June 22. He retired 14 of the last 15 batters he faced, and the only baserunner in that span was eliminated on a double play.

Philadelphia has lost Zach Eflin's last three starts after winning six straight. In his second start since coming off the disabled list with a right middle finger blister, Eflin (7-3) allowed seven hits and four runs with one walk and four strikeouts in 5 1/3 innings.

Luke Maile had an RBI double and Lourdes Gurriel Jr. added an RBI single in the inning before Gurriel exited with knee and ankle injuries. Teoscar Hernandez homered to tie the game earlier in the ninth for the Blue Jays, who won two of three against the White Sox.

Hernandez's homer to lead off the inning was his 16th of the season.

Gurriel extended his Toronto record of consecutive multihit games to 11 with his RBI single in the eighth that cut the lead to 3-2. The 24-year-old has batted .500 (25 for 50) during the streak, which ties Tony Perez in 1973 for the longest in the last 50 years in the majors.

Luis Santos (1-1) allowed a run in two innings for the win. Jace Fry (0-2) allowed three runs without recording an out.

MIAMI (AP) — Jose Urena and three relievers combined on a two-hitter for Miami in a win over Washington to split a four-game series.

Urena (3-10) threw six scoreless innings allowing only one hit. Adam Conley, Brad Ziegler, and Drew Steckenrider each pitched an inning in relief for the Marlins.

Miami was outscored 19-4 losing the first two games before limiting the Nationals to one run on seven hits in the final two games.

Zunino drove in three runs, also delivering an RBI double in the third inning, as the Mariners salvaged the final game of the three-game series. Dee Gordon, Denard Span and Ben Gamel had three hits each for the Mariners.

Justin Upton hit a two-run home run for the Angels in the fifth inning, his 21st of the season, and added an RBI single in the seventh. Los Angeles saw its four-game win streak come to an end.

SAN DIEGO (AP) — Paul Goldschmidt and Nick Ahmed each hit a two-run homer and A.J. Pollock also connected for Arizona, which held on to beat San Diego for a three-game sweep.

Clay Buchholz (4-1) almost got through the sixth as he won his third straight start. Brad Boxberger, who was with San Diego in 2012-13, pitched a perfect ninth for his 25th save in 30 chances.

The Padres lost their fifth straight game and dropped to 2-7 since the All-Star break. They've lost 12 of 14 overall.