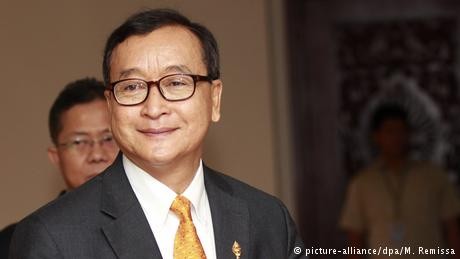 DW: During the last Cambodian general election in July 2013, your Cambodian National Rescue Party (CNRP), did surprisingly well, garnering 55 of 123 seats in the parliament. The Cambodian People's Party (CPP) dropped down to 68 seats from 90. At the time, observers said this result would force Prime Minister Hun Sen to introduce political reforms, or else face social unrest. However, five years later, Hun Sen and his CPP seem firmly entrenched. How do you explain this situation?

Sam Rainsy: The CNRP won more than 55 seats in parliament in the 2013 election, despite a high level of vote rigging. These results were announced after CNRP observers filed a massive number of reports contesting the announced figures.

We protested, but assumed the role of a responsible opposition and worked on a transformation of Cambodia towards a real democracy. Over the past five years, Hun Sen has played hot and cold with the Cambodian opposition and the international community, painting a democratic façade.

However, as the CNRP continued to get stronger, Hun Sen got nervous and forced me into exile. When the CNRP nearly equalized with the CPP during the 2017 local elections under the leadership of Kem Sokha, Hun Sen had no alternative but to go from authoritarian rule to an outright dictatorship in order to survive politically.

Instead of facing an independent judiciary in a democratic Cambodia, he opted to remove the façade of the system he established and reveal his true colors of a ruthless tyrant.

What is left of the opposition in Cambodia? Can they contest the upcoming elections in any way? Are there any opposition members in parliament, or have they gone underground?

Institutionally, the opposition was completely wiped out. In only a couple of months, Hun Sen illegally jailed CNRP leader Kem Sokha on trumped-up charges, abolished the CNRP, revoked the democratically won mandates of all opposition MPs, along with those of thousands of elected local officials from CNRP. He also banned 118 leading opposition politicians from politics and shut down free and independent media.

Those opposition leaders and MPs who remain in the country are harassed and persecuted, while most of them have been forced into an exile. However, all of these draconian measures did not and cannot destroy the opposition and the CNRP as its representative. Millions of Cambodians believe in the CNRP's values, stand up for its policies and cast their votes for the CNRP in the last election.

These citizens are organized in a less visible way and are coordinated through local leadership and those living in exile. No law can wipe out the opposition and no oppression can kill the yearning of the majority for a free and open Cambodia.

You called for a boycott of the elections. Wouldn't it be better to urge voters to vote for parties other than the CCP, if only to counter Hun Sen's claim that he alone represents the best interests of the country and its citizens?

The upcoming vote is not an election as prescribed in Cambodia's constitution. As the UN Rapporteur on Cambodia reminded us recently, an election where the key opposition is not allowed to participate cannot be considered genuine.

Over 40 major democracies in the world, including the EU and the US, stated at the UN that the elections cannot be considered legitimate without freed opposition leaders and members, a restored opposition party and a free press. In such conditions, there is no alternative but to call on Cambodian citizens to boycott this sham election and to not give any token of legitimacy to Hun Sen's dictatorship.

You recently met European politicians in Berlin. What can you tell us about the meeting?

Germany and the EU have taken a very clear stance from the beginning of this crisis. The statements of the European Parliament, European Commission, and European Council have made it clear that the measures taken by Hun Sen's regime are unacceptable, illegitimate, and dangerous. Germany has been very vocal that such conditions cannot be accepted, and even went a step further by introducing unilateral visa sanctions on Hun Sen's close associates.

It was important to have high-level meetings with the German Foreign Ministry on how to respond to the escalation of opposition party suppression in Cambodia. The German government understands clearly what is happening in Cambodia and that allowing Hun Sen to entrench himself as an unchallenged dictator will lead to the deterioration of the economic and security conditions in the country and the region.

The EU is currently reviewing its policy of preferential imports from Cambodia, especially from its vital textile sector. Regardless of the EU's conclusions, would you advocate reversing the preferential policy or keeping it?

The situation is clear – the current preferential export of Cambodian products to EU markets is not based on free will from the European side, but on the currently binding "Everything but Arms" agreement, which in its preamble refers to respect of democracy and human rights in Cambodia.

With the gross violation of human rights, as seen in the latest UN reports and especially with the suspension of the democratic system with sham elections, the Hun Sen regime will have violated this trade agreement with the EU.

It is not a question of the EU reversing the preferential policy, but rather a question of a suspended agreement because of Hun Sen's actions, which would oblige the European Commission to act. It is hard to imagine that the Commission would not act promptly, otherwise it would be operating a trade scheme with Cambodia under a suspended agreement. In previous cases, we have seen the EU reacting resolutely in cases of breached international trade agreements.

Are you still hoping to directly influence developments inside Cambodia, or are you placing your bets on outside pressure? How much longer do you envisage Hun Sen remaining in power?

The struggle for a democratic Cambodia is not a short-term objective. We have been fighting for nearly three decades against the same tyrant, Hun Sen, who is the longest serving prime minister in the world.

I have been subject to many persecutions, they have tried to scare and arrest me, and they have made an attempt on my life. But that didn't stop me. And my story is not the only one. Many in Cambodia have suffered for much too long. What Hun Sen is demonstrating is an act of desperation. He understands that the times when he might have enjoyed majority support are long gone, and should he face a free and fair election, he would be rejected by Cambodian voters. A person who acts in despair may win temporary battles, but will be the ultimate loser.