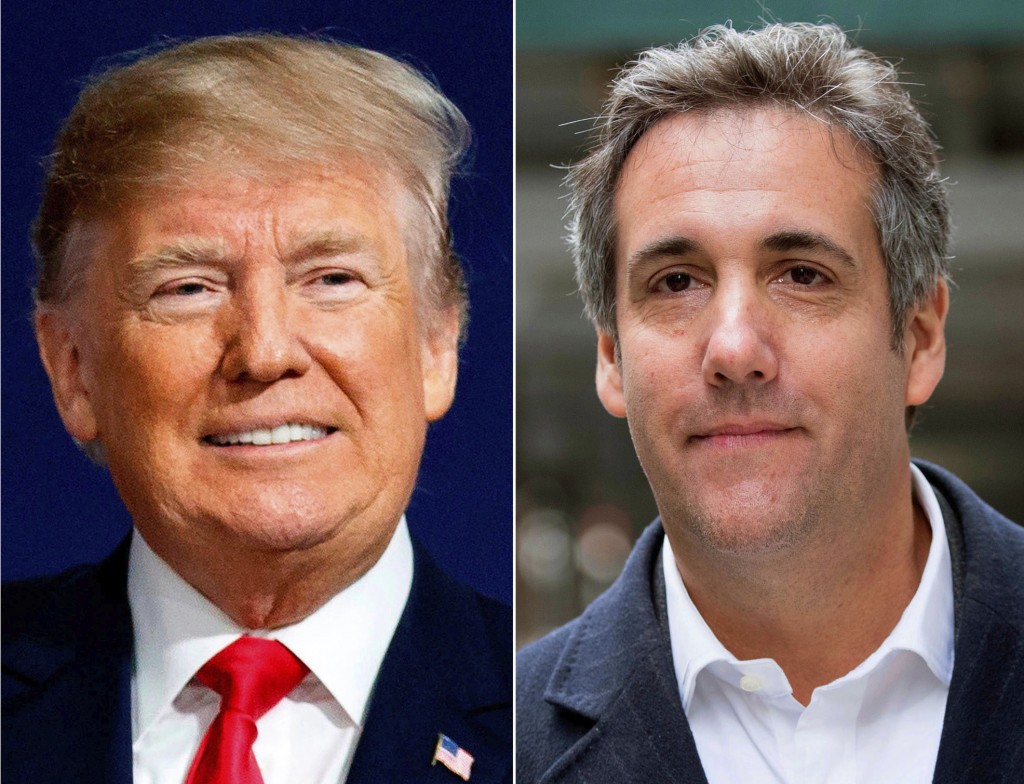 A look at the recording, including what it reveals and what it doesn't:

IT'S QUICK AND CASUAL — AND RELATED TO THE CAMPAIGN

Trump's lawyers say the three-minute recording was made surreptitiously by Cohen during what seems to be a casual, campaign-related conversation with Trump in September 2016, just two months away from the national election.

At the start of the audio, the president appears to be talking to someone other than Cohen whom he calls "hon" and references a "Charleston thing," concluding, "I'm proud of you."

Trump then turns his attention to Cohen, his longtime friend and attorney. The two discuss polling numbers and the impact of a supportive African-American pastor. Cohen tells Trump that The New York Times wants to unseal documents on his divorce from Ivana Trump ahead of the election (an effort that was ultimately unsuccessful, as Cohen predicts).

At one point during the Ivana discussion, Trump yells out, "Get me a Coke, please!"

This chatter is noteworthy because it shows Cohen advising Trump on campaign matters. And that could be of interest to investigators looking into whether Cohen violated election laws by orchestrating hush money payouts.

IT REFERS TO 'OUR FRIEND, DAVID'

Cohen then shifts the conversation. "Um," he says, "I need to open up a company for the transfer of all of that info regarding our friend, David."

This is widely believed to refer to David Pecker, president of American Media Inc., which owns the National Enquirer. The company had just paid $150,000 to model Karen McDougal for the rights to her story about an alleged affair with Trump in 2006.

McDougal later sued, claiming that AMI paid for the story with the intention of burying it to protect Trump.

Cohen says he's already spoken with the Trump Organization's finance chief, Allen Weisselberg, on "how to set the whole thing up." Trump's lawyers say the payments were never made.

Such a payment could be regarded as an illegal campaign expenditure if the money is clearly meant to influence the outcome of the upcoming presidential election. But it would be a harder case to make if the payment was seen as merely designed to protect Trump, who is married, from embarrassment in his personal or private life.

Trump responds to Cohen's suggestion with a question: "What do we got to pay for this?"

This statement makes it clear Trump is familiar with the matter and not learning for the first time of McDougal's allegation or the proposal to arrange a payment.

The tape doesn't prove McDougal's allegations of an affair, and at no point in the recording does Trump acknowledge whether he had a sexual relationship with McDougal. But the audio does suggest Trump knew about her allegations, even as his campaign later insisted that he didn't.

Just days ahead of the presidential election, Trump spokeswoman Hope Hicks told The Wall Street Journal on its report of the $150,000 payment to McDougal: "We have no knowledge of any of this."

At one point, Cohen says of David, "I'll have to pay him something."

This is only important in that it raises questions about whether Trump was trying to hide the potential payment with cash, which can be harder to track.

Also unclear is why the audio ends so abruptly. Trump on Wednesday suggested the tape was cut just as he was "presumably saying positive things," although there was no evidence of that.

The recording turned up after federal agents raided Cohen's office, home and hotel room this spring as part of an investigation into possible fraud and violation of election laws. Court filings say 12 audio recordings in all were passed on to federal prosecutors after lawyers dropped any claims of attorney-client privilege.

One question is why Cohen chose to make it public. Cohen's attorney, Lanny Davis, released the recording to CNN Tuesday night in what is seen as an open hostility between Trump and Cohen.

Asked if Cohen was still seeking a presidential pardon while under federal investigation, Davis responded simply, "No."

"This is about truth versus lying and ultimately Trump is going to be done in by the truth."