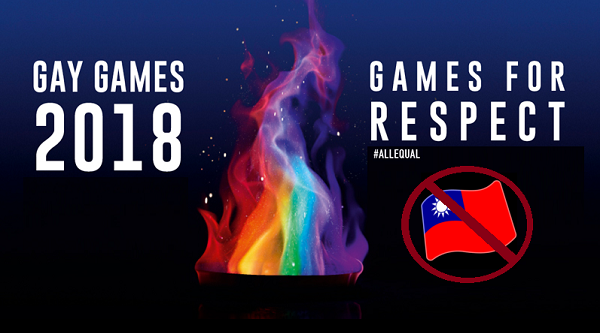 TAIPEI (Taiwan News) – As Team Taiwan's 25 person squad prepares to compete in the Gay Games being held in Paris from Aug. 4 through Aug. 12, it has been reported that China is maneuvering to ban the Taiwanese flag from the competition grounds.

Taiwanese activists on Monday, July 23 have criticized China for reportedly pressuring organizers in Paris to prohibit the venue and the athletes from displaying Taiwan’s flag at the competition.

Representatives and supporters of Team Taiwan were already intending to use the venue of the Gay Games to draw attention to the unfair requirement that they compete as “Chinese Taipei” rather than simply as “Taiwan” as most athletes would prefer.

The Federation of Gay Games (FGG) is reported to have previously agreed that it would allow the athletes to compete under the name “Taiwan” and use the national flag, reports AFP.

Yet it seems that may not be 100 percent certain, as China attempts to mobilize political influence to minimize all representations of Taiwan at international events.

AFP reports that the president of the Taiwan Gay Sports and Gay Development Movement Association, Yang Chih-chun, said that the FGG has been in contact with the organization and “expressed concerns” over allowing the flag to be displayed.

Yang expressed a hope that the FGG and the French government could resist the pressure of the Chinese, and allow the team to compete under “Taiwan” and to fly the flag that Taiwanese athletes recognize as representing their country.

Originally they were hopeful that the Gay Games would be an unprecedented opportunity to come out and compete openly with the label of Team Taiwan, under the banner of the national flag. With such hopes in mind the Taiwan LGBT Sport Association proudly unveiled their slogan as "Taiwan comes out!" (台灣站出來).

Gay rights activist Chi Chia-wei (祁家威) who is leading the Taiwanese delegation to this year’s competition was quoted as saying "we will fight till the last moment to use our national flag at the Gay Games."

It would be very disheartening if an event and organization that celebrates inclusion and strives to support marginalized communities were ultimately coerced by an autocratic and oppressive regime, into rejecting the premise of equality, and the right of self-determination being promoted by the Taiwanese athletes.