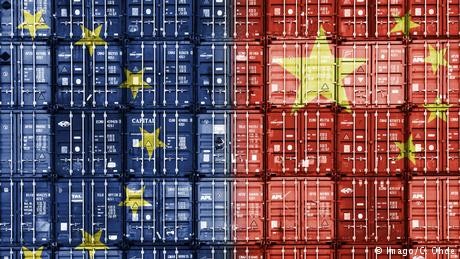 Well, at least the stars were all nicely lined up on the red China flags and the blue EU flags draped behind the negotiating table at the EU-China summit, which took place in Beijing's Great Hall of the People earlier this week. The EU and China were keen to demonstrate their solidarity as US President Donald Trump continues to go it alone. "We are all aware of the fact that the architecture of the world is changing before our very eyes," said European Council President Donald Tusk, backed up by Chinese Prime Minister Li Keqiang. China's ambassador to the EU had said in an editorial recently that "China and the EU were two major forces of stability" that supported inclusive globalization.

As opposed to the summits of the past two years, the two sides were even able to agree on a joint summit statement, which said that they wanted to cooperate more closely economically, but also to work towards reforming the World Trade Organization (WTO) and to fine-tune an investment deal which could lead to a free trade agreement. Questions of climate change and international security policy were also discussed. Tusk warned that there was still time "to prevent conflict and chaos," saying that the WTO should be reformed not destroyed, in a message to the White House.

Read more: Donald Trump's trade spats with Europe, China and NAFTA ― What you need to know

This is all positive for the EU. The tensions with Washington have pushed China into opening its doors to EU firms more. Goods worth €1.5 billion ($1.7 billion) already flow daily between the two. European Commission President Jean-Claude Juncker made some ambiguous comments, saying that China could open up its economy if it wanted. China has already lowered the technology-transfer pressure on EU firms. BASF has been granted permission to build a €10 billion plant in Guangdong by 2030; it will be the chemicals giant's third-biggest plant and its biggest in Asia. BMW too has been allowed to increase its stake in a joint venture in Shenyang from 50 to 75 percent. This is unprecedented. The Chinese prime minister said that China would continue to open its market to foreign capital. China's foreign investment "negative list" which identifies areas that are off-limits to foreign investors was shortened in early July from 63 forbidden sectors to 48.

But all this is still not going fast enough for the EU, which wants its firms in China to enjoy the same unrestricted access to the markets as Chinese firms have in the EU. However, Beijing is not yet willing to completely let go of its control over state monopolies. So there was talk of the "development of synergies between China's Belt and Road Initiative and the Investment Plan for Europe," as if the two were equal projects. The EU-China Connectivity Platform and the Trans-European Transport Networks, which took on a more concrete form at the recent 16+1 Summit in Bulgariaand is supposed to provide eastern Europe in particular with a network of roads, rail-lines, ports and waterways, remain paper tigers.

China-EU cooperation is supposed to "abide by the shared principles of market rules, transparency, open procurement and a level playing field for all investors, and comply with established international norms and standards, respective international obligations, as well as the law of the countries benefiting from the projects, while taking into account their policies and individual situations."

Such formulations leave plenty of room for interpretation. The EU could refer to international norms, while China might refer to regional particularities if it wanted to implement short-term action plans.

However, there has been some real progress: Five years after President Xi Jingping launched his New Silk Road project, the EU has agreed to help set up the China-EU Co-Investment Fund. Each side will invest €250 million. The aim is to help medium-sized companies to benefit from the New Silk Road. Now the question is how long it will take before the first joint project takes off.

Nobody wants to shut out the US

Both sides made it clear that nobody wants to shut out the US, as nobody would benefit from a divided world order. "The talks between China and the EU do not target a third party and are not affected by a third party," said Li Keqiang diplomatically.

Both Brussels and Beijing continue to placate Washington and both made clear at the summit that they thought multilateralism was the best way of solving the world's current problems. They are very aware that the WTO can only be reformed if the US is on board, the idea being to overhaul core rules and address the issue of subsidies, unfair competition, export financing and forced technology transfer that Washington has criticized in the past.

There are no clear foes in this current iteration of pendulum politics and no easy partnerships. Brussels still considers the US as an ally with similar cultural values. "Europeans will never give up on America because America never gave up on us," tweeted Frans Timmermans, First Vice-President of the European Commission, the night before the summit. "That's what friends are for."

Moreover, Trump will not be in the White House for ever and China hopes that he will come to his senses on trade while he is in office.

This could backfire for the EU, which has to remain alert. Even if EU-China relations look good at the moment, the problem with politics is that the pendulum can easily swing the other way. If Beijing and Washington come to an agreement, China will buy more US goods than European products. At the moment, China has put a deal to buy 140 Airbus planes on hold. It's still debating whether it might not be better to invest in Boeings.