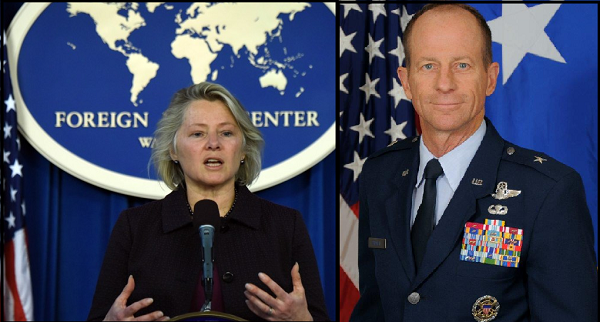 TAIPEI (Taiwan News) – The Deputy Assistant Secretary of the Bureau of East Asian and Pacific Affairs of the U.S. State Department Susan Thornton announced her plans to leave the position on July 1, with her replacement expected to take over at the beginning of August.

As the U.S. official responsible for the department’s Taiwan policy, there is great interest to see who Secretary of State Mike Pompeo will tap to replace her. Currently the most likely candidate for the position is rumored to be a retired military officer, David Stilwell.

According to a July 18 Washington Post article, David Stilwell, a retired brigadier general and former Deputy Director for Politico-Military Affairs for Asia at the Pentagon, is a likely pick for the position, which will need to be filled in August.

Susan Thornton was appointed to the position with the Bureau of East Asian and Pacific Affairs under the former Secretary of State Rex Tillerson. However, since his departure, it has been rumored that many in the administration and some lawmakers consider Thornton too friendly towards China.

Now Thornton is holding the seat until current Secretary of State, Mike Pompeo, can decide on an appropriate replacement.

UDN reports that Stilwell is a very likely candidate and that he has very detailed knowledge of the cross-strait situation. He reportedly considers China a strategic competitor of the U.S. and fully recognizes the uniquely important role and position of Taiwan in the region.

Stilwell is also a colleague of Admiral Harry Harris, who has been appointed as ambassador to South Korea. During Stilwell’s time at the Pentagon he was working very closely with Harris, who was then the top commander of the U.S. Pacific Command, the largest joint military command of U.S. forces, which has since been renamed the U.S. Indo-Pacific Command.

Stilwell is also quite familiar with the political situation in Beijing, having served as the military attaché to the U.S. Embassy in Beijing from 2011 to 2013.

Eric Sayers, a special assistant under Harris during his time as USPACOM commander said that Beijing would likely be very unhappy with the appointment of Stilwell to the post at the State Department. He added that this means Stilwell is probably the right choice for the job.

Other potential candidates following Stilwell on the list are reportedly the Director of Asian Studies at the AEI Institute Dan Blumenthal, Matt Pottinger who is currently a member of the National Security Council at the White House, and retired admiral Scott Swift, who served as director of Navy Staff in the office of the Chief of Naval Operations.