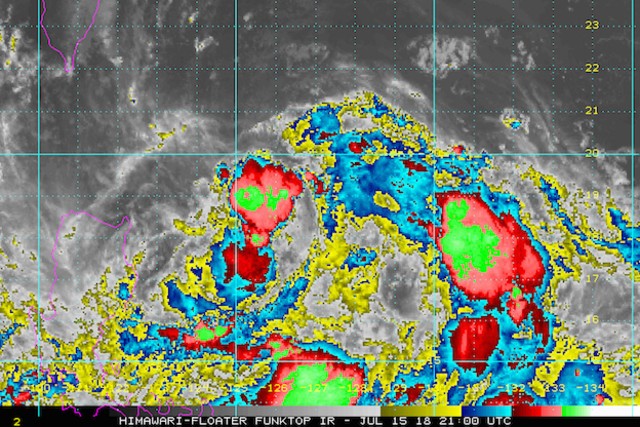 By Tuesday morning, the storm is expected to be 300 kilometers west of Calayn, and by Wednesday morning, it should have moved 1,140 to the west, out of Philippine waters. The rest of Luzon will also experience scattered showers and thunderstorms during this period.

As the tropical depression passes to the south of Taiwan, eastern and southern Taiwan will see scattered showers, with Tainan, Kaohsiung and Pingtung seeing occasional rain, according to the Central Weather Bureau (CWB). The rest of the island will experience hot temperatures with only occasional afternoon showers.

The CWB predicts that brief showers and thunderstorms will continue tomorrow in eastern and southern Taiwan. However, the rest of Taiwan, as well as Penghu, Kinmen and Matsu will see partly cloudy to clear skies with brief showers in the afternoon.

As for coastal areas over the next two days, the lower half of eastern Taiwan (including Orchid Island and Green Island) and the Hengchun Peninsula will see large waves, therefore visitors to the beaches in those areas are advised to exercise caution.

CWB forecaster Lee Meng-hsuan (李孟軒) said that today strong winds will be seen in eastern Taiwan, water vapor will be high in the Hengchun Peninsula and the probability of rain in those areas will be high. From this evening until early tomorrow morning, rain will be more likely in southern Taiwan, said Lee.