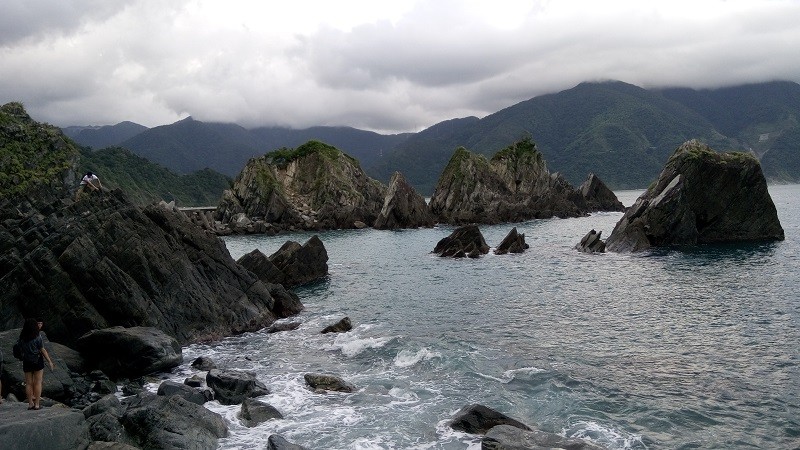 TAIPEI (Taiwan News)—Last weekend I visited a couple of charming places in Nanao Township in Taiwan’s northeastern county of Yilan, but left out Dongao (東澳), which is a part of Nanao, because of time constraint. But I have been attracted to Dongao by something unexplainable since I made a short stopover there a couple of years ago. So I went there on Saturday (July 14) on a separate trip, and the visit convinced me that the half-day I spent there was way too short.

I started driving on the National Highway No. 5 from Taipei around noon. Normally it takes only about one and a half hours to get to Dongao from Taipei by taking the first completed section of the Suhua Highway Mountain Section Improvement Project at the end of the only national highway in eastern Taiwan. But because of traffic congestion before and inside the Hsuehshan Tunnel, it took me about two hours to get there.

I turned left at the end of the first completed section of the Suhua Highway Mountain Section Improvement Project and drove another 500 meters or so to get to Dongao, which is also accessible by train. Dongao is geologically similar to but smaller than downtown Nanao lying to its south, with mountains separating the two places. Like downtown Nanao, Dongao is surrounded by mountains on the north, west and south sides, with the east side bordering the Pacific Ocean with a long charming mixed sand-pebble beach (the Dongao Bay).

I visited the Dongyue Cold Spring (東岳冷泉) park first. The park is located not far from the Dongao Elementary School in Dongyue Village, which is an Atayal community. The temperatures of the cold spring are said to be 14-16 degrees Centigrade all year around. I soaked and relaxed myself in the crystal clear spring water for about 40 minutes, during which I got out of the water several times. The pleasant tingling feeling all over my body generated by soaking in the cold spring is the best thing I can do in the world to beat the summer heat. However, I saw many people getting goose bumps after being in the cold water for a few minutes. A railway bridge and a deserted one span the park, and therefore people visiting the park will see trains passing by from time to time.

Even though the cold spring park was packed with visitors on Saturday, I still think it is a must-visit place in Dongao and a safe place for everybody, especially children, to play with water in the summer heat. Currently, admission to the park and parking are both free.

My second stop is the Dongao Bay. After passing the elementary school and the FamilyMart on the main street (Provincial Highway No. 9), I took a left turn onto Dongao Street and then drove along the bay to its southernmost part to visit the Fenniaolin Fishing Harbor (粉鳥林漁港). The place I wanted to visit was not the harbor itself but the shore lying to its south. The shore gives visitors a feel of Vietnam’s Ha Long Bay with rocky mounds protruding from the sea. I took some photos of the geological wonder and left this narrow and rocky shore for the mid section of the open bay, where I swam and just relaxed on the pebble beach. It felt so good to just frolic in the waves, let the waves push me around, and listen to the crackling sounds the pebbles made when they hit each other every time a wave receded.

I would like to linger on the beach for much longer, but left the beach reluctantly as it would soon be dark. I saw some people paddling in sea kayaks in the bay. They had joined a sea kayaking tour. I was thinking to myself that maybe I should join such a tour next time when I visit Dongao. The Dongao Bay (This photo is taken from Wikimedia Commons)

On the main street, I saw a group of people just returning from a river tracing trip because they were wearing river trekking shoes, life vests and helmets. I wondered where they went.

I stopped at Yilan City to have dinner before coming back to Taipei. 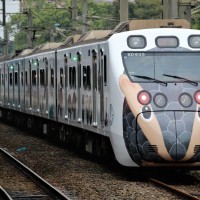