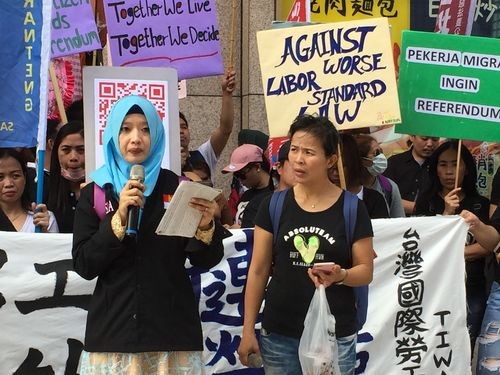 Taipei, July 15 (CNA) Several dozen migrant workers from the Philippines and Indonesia demanded on Sunday that they be allowed to join a signature drive for a labor law referendum, saying that labor rights are for all workers irrespective of nationality.

"Foreign workers have the same rights as local workers because workers' rights are human rights," Gilda Banugan, chairperson of Migrante International's Taiwan Chapter, said at the rally staged by the Taiwan International

The protesters demanded that the government recognize the validity of migrant worker signatures on a petition for a referendum that would repeal a set of amendments to the Labor Standards Act, which took effect March 1.

The referendum would be held in tandem with November's local elections.

The amendments were passed to allow more flexibility in scheduling overtime, but many labor groups objected to revisions that created the possibility of 12 continuous days of work and only eight hours of rest between two shifts.

The revisions also raised the cap on overtime to 54 hours per month, up from 46 hours before it was amended, but kept the limit at 138 hours every three months.

Migrant workers working in factories running on three 8-hour shifts are among the groups hit hardest by the eased restrictions on work hours, but they were never consulted on the changes, said Chen Hsiu-lien (???) of the TIWA.

The referendum petition, initiated by an alliance of labor groups and supported by smaller parties, including the Social Democratic Party and New Power Party, is now in the second phase of signature collection.

The number of signatures required for the petition to be considered as a valid proposal is 1.5 percent of all eligible voters, or 280,000.

"As local workers are having a referendum on the labor act, we want to join, because we are also workers here," said Daisy, a Filipino caregiver.

Migrant caregivers help many people in Taiwan take care of the elderly, the disabled and their children in families while they are at work and thus contribute to Taiwan's economic productivity, Daisy said.

"We should have the right to decide on issues concerning migrant workers. We live here, work here. We should decide together," she said.

An Indonesian factory worker who identified himself as Iwan said he hoped Taiwan's government would be receptive to their demands and reconsider the newly amended provisions of the law that favor employers over workers.