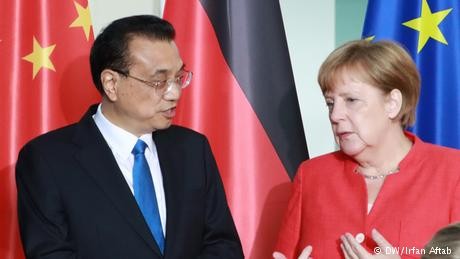 Chinese Prime Minister Li Keqiang did not want to leave anything to fate. Just a few days before travelling to Germany, he wrote an opinion piece in German daily Frankfurter Allgemeine Zeitung, in which he said in a respectful, almost flattering tone, that, as important world economies, China and Germany should act as "models," especially at a time when protectionism was beginning to flourish again.

He said that the two should campaign for a "peaceful, stable, open and cooperative world." In his speech at the summit, he reiterated these comments and said that it had never been more important for Europe to defend free trade and multilateralism. He also highlighted that it was a very good time for Germany and China to draw closer together.

Everything has changed with Trump

When Li first visited Germany in 2011, such words would have raised eyebrows but Donald Trump was not in the White House then. The US president had not put such a strain on trans-Atlantic relations, tearing apart agreements and ignoring WTO rules.

Li said that business could only flourish if there were harmony - well aware that China needs strong partners to deal with Trump's US.

The trade dispute between China and the US has now entered a new phase. Tariffs came into force last Friday despite what seemed like a successful round of negotiations. Although a compromise will probably be found, it will not do any harm to China to get closer to Germany, the biggest economy in Europe and the third-biggest exporting nation in the world after China and the US.

Read more: Foreign investment in US down sharply

China's problems are also Germany's problems. Chancellor Angela Merkel has the same difficulties with Trump as Li. Therefore, it was important to signal that Berlin and Beijing had a common line. Li said that "open cooperation" and "mutual benefits" would have a "win-win result" and promote the "world's openness and prosperity."

But it's not as easy as it seems for Germany to cooperate with China. In many ways, Berlin still has a lot more in common with Washington than Beijing. While Li claimed that China did not permit violations of intellectual property and did not demand technology transfers of foreign companies, this does not quite correspond with reality or is a very free interpretation of the situation.

Li also claimed that China was "very interested in protecting privacy and the use of trade secrets in this age of digitalization and data usage." International corporations in China who have had to report to internal Communist party cells since last year might give a wry smile.

China's cybersecurity law compels foreign companies to save their data on Chinese servers and use state lines to go online. The problem for Germany is that even Google, Facebook and many others are less cautious about data than Germany would like. But here, too, Germany has more in common with the US than with China – this could change but China would have to make more concessions.

Li vowed to improve and said – comparatively concretely as China goes – that China would be prepared to work towards a Sino-European investment deal and to develop prospects for a Sino-European free trade zone as quickly as possible. These are, however, two subjects where Germany has put the brakes on, convinced that reciprocity comes first, agreements second.

The 22 agreements to boost economic cooperation signed at the summit illustrate how much power China has over the German economy, as well as Berlin's problem areas. China's CATL has now been allowed to build its first EV battery factory in the eastern city of Erfurt because Germany was asleep at the wheel on this for too long.

It would not have been considered possible just five years ago but German carmakers need batteries urgently because China is forcing them to provide more e-cars. It's little comfort to know that this is the most important investment that eastern Germany's Thuringia has seen in 10 years. What really stings is that China is a pioneer in this area, not Germany. "I would not be upset if we could do it ourselves," Chancellor Merkel rightly said. But Germany has long been out of the race in this regard.

Read more: How soon till we all fly electric planes?

German chemicals group BASF also needs to step on it if it wants to remain in the race. The Chinese state chemicals giants Sinochem and ChemChina are currently merging to become the biggest chemicals company in the world, worth some €100 billion ($116 billion). BASF, which is currently worth €64 billion, is under pressure even though it is still ahead in terms of technology in many areas.

New BASF CEO Martin Brudermüller, the only chief executive of a DAX-listed company to have significant experience with China, has been prompt to react. He wants to build a production site in the southern Chinese province of Guangdong by 2026 to complement its headquarters in the southwestern city of Ludwigshafen and a major plant in Antwerp. The $10 billion site will be the biggest single investment BASF has ever made. China accounts for some 40 percent of the global chemicals market.

But the problem for Berlin remains that Europe needs the Chinese market more than China needs European technology. China has its fingers in many pies. Li came to Berlin straight from the 16 + 1 (CEEC) summit in Bulgaria after having secured more political influence in Brussels in exchange for investment in the smaller EU member states. This could also cloud the relationship between China and Germany.

However, in terms of human rights, there has been some progress. A day after the Sino-German summit, the Chinese government allowed Liu Xia, the widow of Nobel-winning dissident Liu Xiaobo, to travel to Germany, which Angela Merkel had requested. The fact that her request was granted is a sign that Beijing is serious about the Sino-German partnership.

Frank Sieren has been living in Beijing for over 20 years.