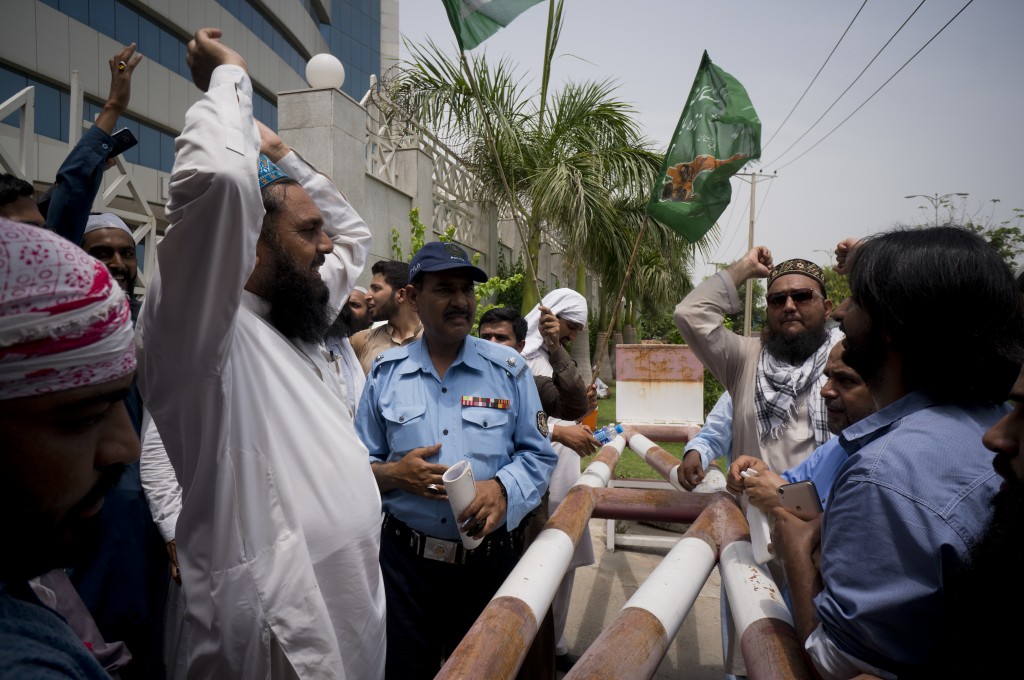 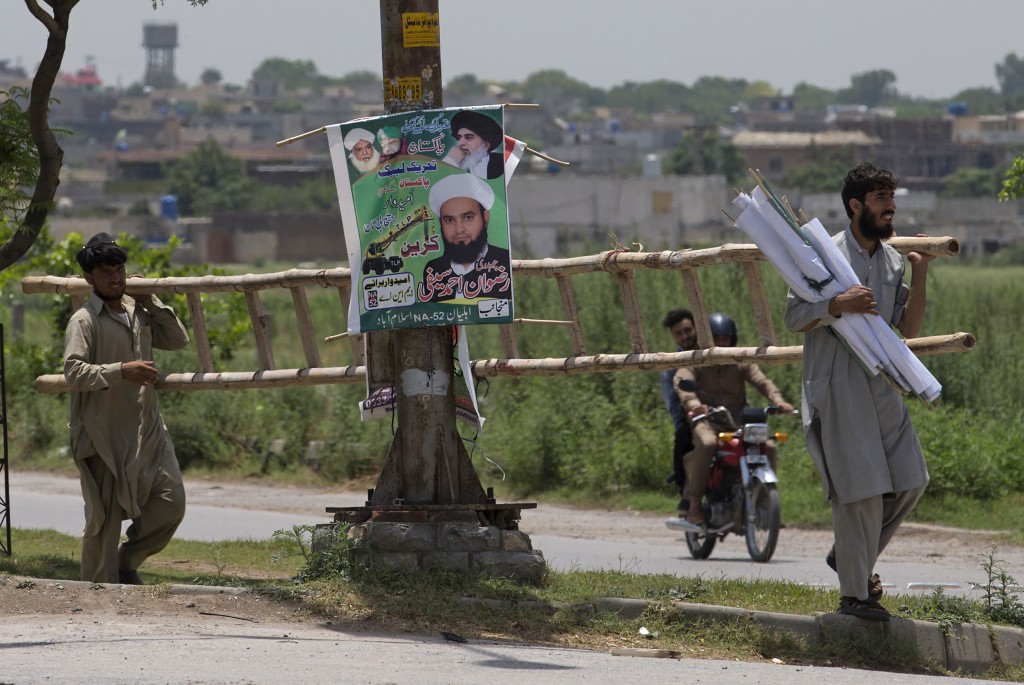 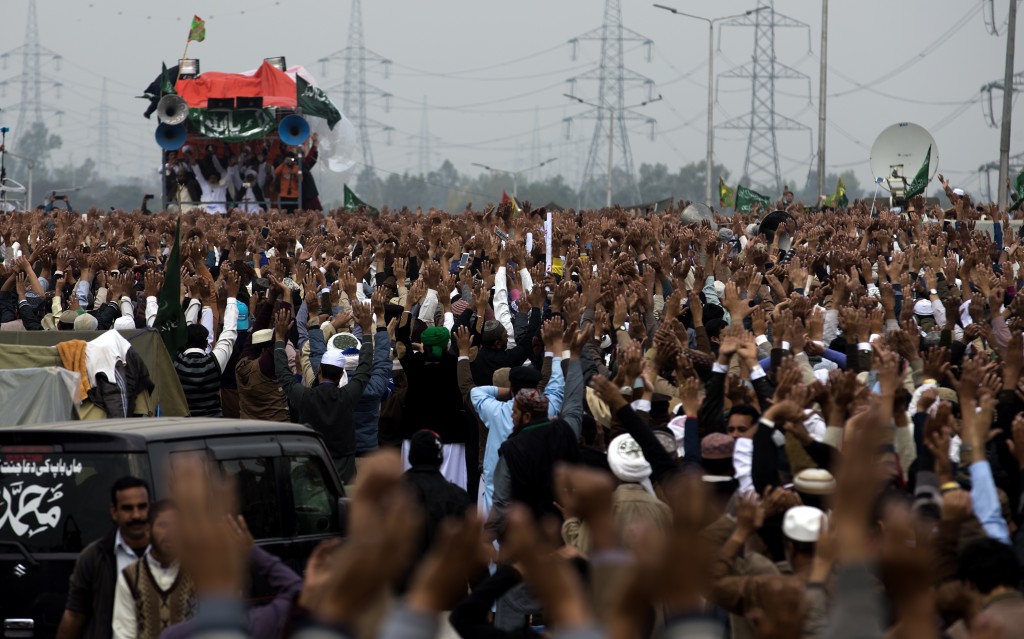 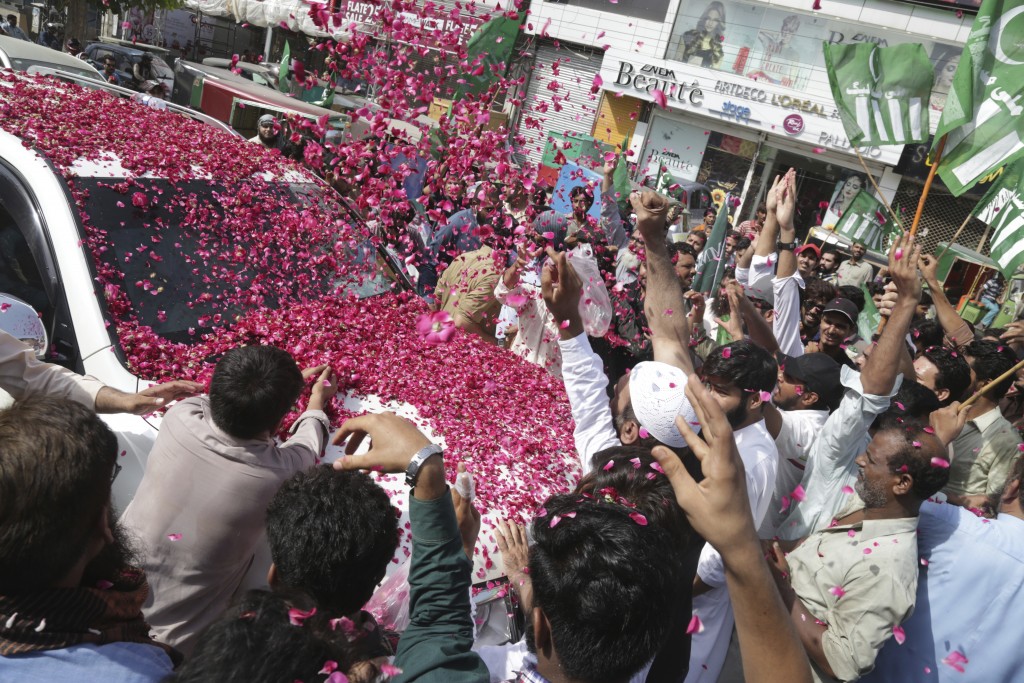 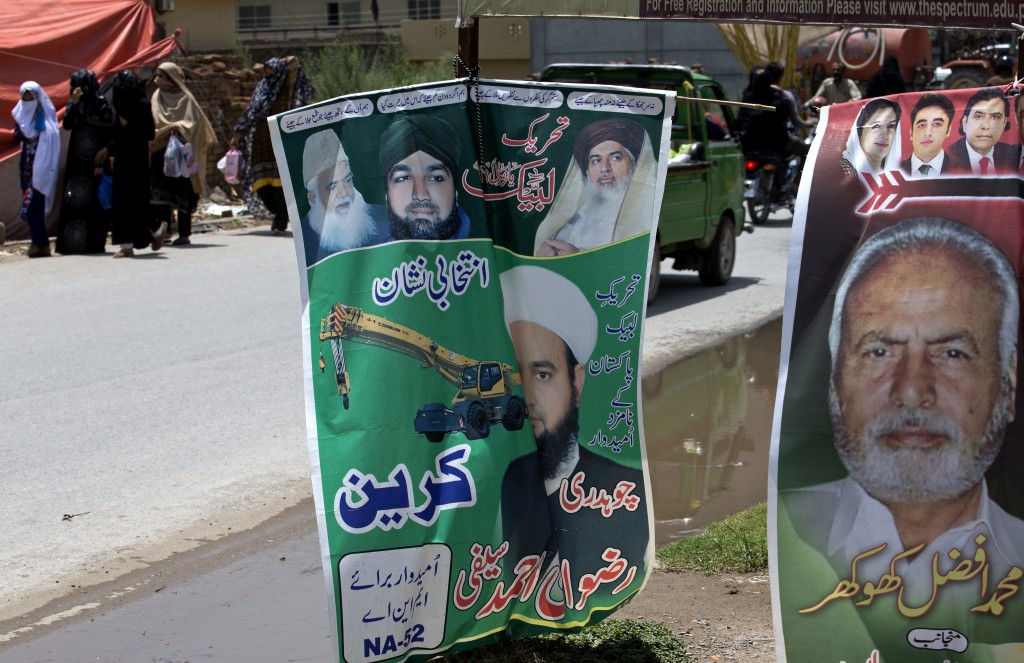 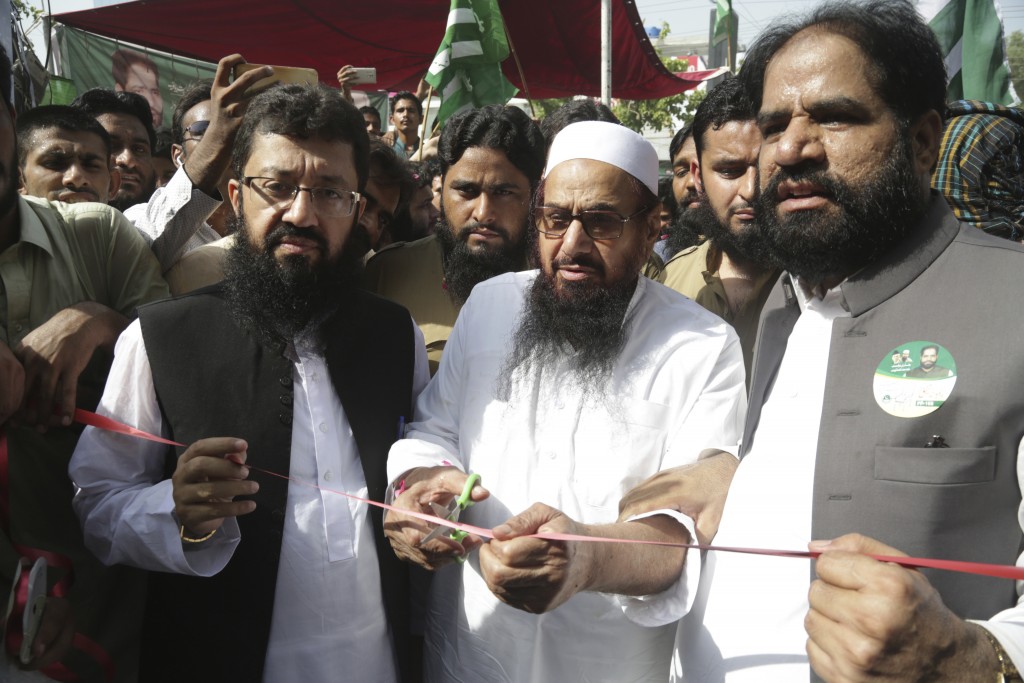 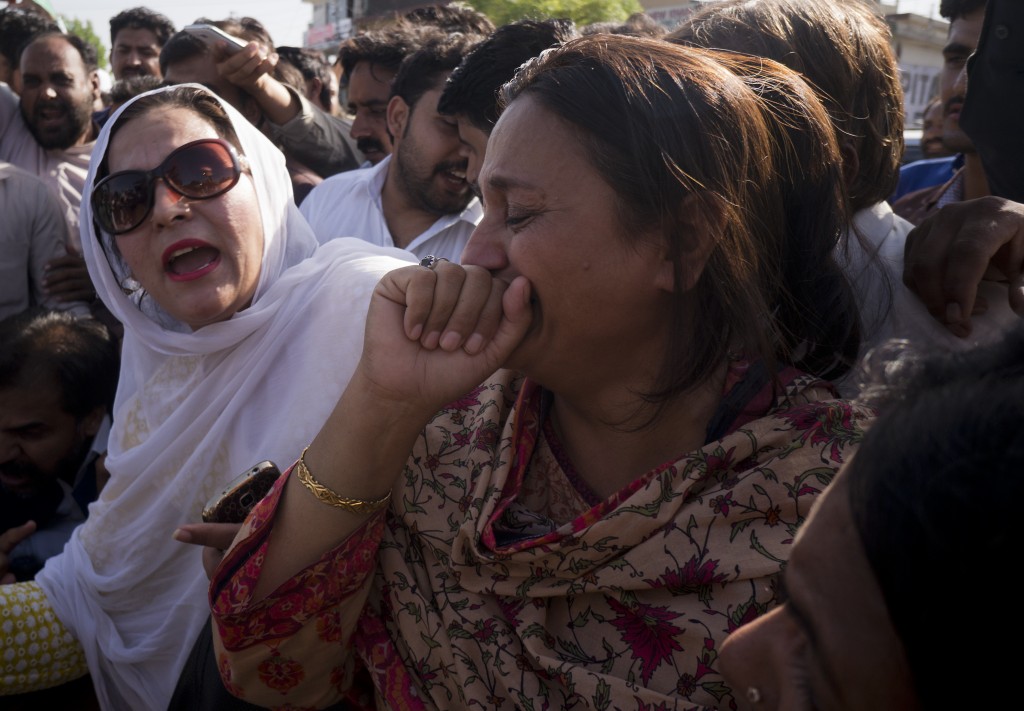 FAISALABAD, Pakistan (AP) — Pakistan is seeing an unprecedented number of extremists and militant sectarian groups — even an international terror figure with a $10 million U.S.-offered bounty on his head — on the campaign trail ahead of parliamentary elections later this month.

Analysts warn the phenomenon is a slippery slope to further radicalization of this conservative Muslim majority nation.

Michael Kugelman, deputy director of the Asia Program at the Washington-based Wilson Center, says the participation of the radical groups "in the election is highly significant, not because of their ability to sweep into power, which won't happen, but because of how they can use the political process to legitimize themselves and their extremist ideologies."

Take the small political party known as the Milli Muslim League, or MML.

In April, Washington placed the MML on its list of foreign terrorist groups, calling it a front for the Lashkar-e-Taiba militant group, co-founded by U.S.-wanted militant Hafiz Saeed to stage attacks against Indian troops in the Himalayan region of Kashmir, divided between India and Pakistan but claimed by both in its entirety.

Saeed, blamed for the 2008 Mumbai attacks that killed 166 people, was declared a terrorist by the United Nations and the United States has offered a $10 million bounty for him.

When Pakistan's election commission refused to register the MML for the July 25 elections, Saeed fielded his candidates under the banner of the already-registered Allah-o-Akbar Tehreek party.

It's a familiar modus operandi for Saeed, who routinely dodges sanctions by renaming his outlawed organizations.

When Lashkar-e-Taiba was declared a terrorist group, it was resurrected as the Jamaat ul Daawa — a welfare organization aiding the poor and sick, according to Saeed.

"By bringing the often-toxic views of these groups into the political mainstream, Pakistan's already-enabling environment for extremism risks becoming all the more permissive," said Kugelman.

Mohammad Yaqoub Sheikh, a candidate for parliament from the Punjab provincial capital of Lahore, openly admits that the Allah-o-Akbar Tehreek and the MML "are one party."

The Allah-o-Akbar Tehreek has more than 260 candidates contesting the polls. In Lahore and elsewhere across Punjab province, where 60 percent of the country's 200 million people live, its campaign posters prominently feature Saeed and are emblazoned with the MML party name.

At a rally earlier this month in Faisalabad in southern Punjab, Saeed was showered with rose petals as he stepped onto a stage crowded with radical compatriots — men in long unkempt beards who adhere to a strict interpretation of Islam, akin to the version practiced under the Afghan Taliban.

The rally of several hundred supporters seemed unfazed that the world identifies Saeed as a terrorist.

"Outside they can say whatever they want, but inside Pakistan we love him," said a participant, Shahid, who goes by only one name.

Saeed has rejected allegations of masterminding the Mumbai attack but his fiery speech in Faisalabad was laced with threats to India, the U.S. and anyone who challenges his view of Islam.

"Our war against Crusaders, Hindus and Jews will continue," he warned and mocked U.S. concerns over his participation in the elections.

The political crisis that has gripped Pakistan since last July, when the Supreme Court ousted Prime Minister Nawaz Sharif from office over corruption and the subsequent cascading allegations against his ruling Pakistan Muslim League party, have also played into the hands of extremists and radicals, who have traditionally had the patronage of the country's powerful military and intelligence agency.

Forced to elect a new leadership, the Pakistan Muslim League is heading into the race for the 342-seat National Assembly and four provincial parliaments weakened by the scandal surrounding Sharif and an irate military.

Sharif is believed to have run afoul of the military, which has ruled Pakistan directly or indirectly for most of its 71-year history, when he sought to restrict its involvement in civilian affairs and criticized army efforts to combat extremist groups.

Rights groups say the military is seeking to influence the election outcome to keep Sharif's party out of power.

"The military derives benefits from having these hard-line outfits in the state of electoral play," said Kugelman. "They have the potential to attract votes from some of the more conservative supporters" of the Pakistan Muslim League.

While Saeed may be among the most prominent radicals on the campaign trail, others in the lineup are just as worrisome, said Mohammed Amir Rana, whose Islamabad-based Pakistan Institute of Peace Studies has long tracked radical groups in the region.

Outlawed groups, particularly radical Sunni Muslim ones, have been resurrected under new names but "their agenda is unchanged," Rana said.

For Saeed and other radicals, "this election is about gaining legitimacy, expanding their influence. We have not seen them giving up jihad," or holy war.

Another radical group in the fray is the previously unknown Tehreek-e-Labbaik Pakistan. Its rallies shut down parts of Islamabad earlier this year after the party accused Sharif's government of blasphemy for accidentally dropping a reference to the Prophet Muhammad from a draft law.

Winning even a small number of seats would be huge for Tehreek-e-Labbaik Pakistan and could set back lawmakers' efforts to curb the use of a controversial blasphemy law, which carries an automatic death penalty, to settle disputes, frighten or intimidate opponents simply by levelling accusations of insulting Islam's prophet.

When you have "hard-line political parties, including some aligned with internationally designated terror groups, come out in force to contest elections even in the face of international pressure — that's a sobering reality," said Kugelman.