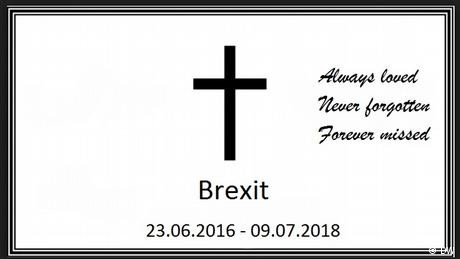 What a hectic Monday this was for the UK. The ministers in London were falling like pins, but Foreign Secretary Boris Johnson's resignation was without doubt the highlight. He thought his exit was an historic event and even ordered a special photographer to document the moment. A pity nobody took pictures of Foreign Office staff popping open the Champagne behind his back.

His resignation letter is, in any case, worth remembering alongside Shakespeare's great monologues. It goes on far too long, meandering and rambling every which way. But there is some great imagery. "It is as if we are sending our vanguard into battle with the white flags fluttering above them," he wrote about Prime Minister Theresa May's Brexit offer. He is such an incurable romantic, stuck firmly in the 19th century. These days it's all about silent killers falling from drones circling in the sky. No flags to be seen anywhere.

But Boris clings tightly to past glories, to the time of Imperial greatness, when Britain made the rules for the world. The UK would become a "colony," he whined over May's softened Brexit plans. For an unrepentant colonialist this must be a horrible fate indeed.

And then there are the false claims about the European Union that even in his resignation letter Boris can't resist. Brussels has prevented the UK from changing safety features for trucks that would save cyclists' lives, he claimed, when in fact the European Parliament in 2014 voted in favor of these changes and they will come into effect next year. And the sad truth is: The British government opposed them in the European Council. This saga is so very typical of the toxic mix of prejudice, half-knowledge and disregard for the truth that makes up Boris Johnson. He'd do anything for a cheap laugh and a good kick against the EU.

And finally the pinnacle of the resignation letter: "The dream (of Brexit) has died." If only! Experience shows that Boris is irrepressible and will continue to snipe from back stage. May better get some extra-strength body armor.

Nobody cries for David Davis

The mad Monday began with with David Davis taking his hat during the night. Not that the resignation of the Brexit minister would be greatly noticed in Brussels, as he has spent no more than four hours with his EU counterparts this year. Somehow his special mix of jocularity and swagger was not a great success with fellow negotiators. They always suspected that emptiness might lurk behind the surface. One of Davis' political friends told the press that he was not "a details man." In a negotiation process that has to address thousands of details, from aviation to pharmaceuticals, that might be seen as a disadvantage.

Thankfully Davis' resignation note was comparatively shorter and less digressive. He simply did not agree with May's latest Brexit plans: "It seems to me that the national interest requires a Secretary of State in my Department that is an enthusiastic believer in your approach, and not merely a reluctant conscript." One can image Davis pressed into service and groaning under the weight of his task.

Reaction from the EU was terse. The talks will carry on with whoever London chooses to send and there was no room for emotions like regret or disappointment. In any case, May's aide Ollie Robbins has been running the show in Brussels for a while. Davis was sidelined because his particular negotiating style, more in the spirit of a poker game, didn't inspire trust: Keep a straight face, put everything on one card at the last moment and hope for the best. What will Davis do after his resignation? "Go and have some fun," was the answer. We are sorry he did not enjoy himself more in Brussels.

When May meets Merkel

On the sidelines of the Western Balkans summit in London, May met with German Chancellor Angela Merkel. The two ladies have a lot in common these days. Both have survived attacks from their own ministers and cannot yet be certain the hostilities are over. But May seems, momentarily, to be slightly better off than Merkel, because at least two of her worst troublemakers have fallen on their swords.

TM: Hi Angela, did you notice that Boris and David Davis have left? How about that Seehofer over at your place?

AM: Oh, it's unpleasant when ministers resign. But when they stay it's not much better…

TM: Maybe we could we talk for a moment about my Chequers proposal…

AM: Isn't that Larry the cat back there walking across the lawn?

May held talks at her country seat at Chequers over the weekend and the whole Cabinet was forced to turn up. They were greeted by the ominous warning that whoever wanted to resign would be stripped of their ministerial car and have to take a cab back to London. The local Taxi company, however, has gone out of service, as emerged later. So this was a good reason for the mutineers to wait until Monday.

The prime minister then explained her plans for a softened Brexit, which is a mix of high tech fantasy, a bit of a customs union by another name and parts of the single market. Everybody not prepared to back her should leave, she said. Boris mumbled something about "a turd to be polished" but left it at that. Further details would have been disturbing and you don't disagree with teacher to her face. May was able to announce that the collective responsibility of her Cabinet was restored and there was great relief all around. The peace only lasted until Monday.

This week May will offer the details of her Chequers proposal to the EU. Her departed Brexit-Minister was right on one point: Brussels will demand further concessions, because as it stands the plan is mostly cheeky cherry-picking. What will happen, however, when May goes back to her party and asks for more? The game is not over, watch this space.

A different kind of success

Talking about the game, there is only one one competition on peoples' minds in London at the moment and that is the World Cup, specifically England's success. For the first time in 28 years, English football has truly come close to winning a title and this is a reason to rejoice. After the quarterfinal win against Sweden, there were raucous scenes on the streets, with fans bellowing hopefully "It's coming home" — a reference to the World Cup trophy returning to the country where football was invented.

Some daring commentators told May last week that she should take a page from England Manager Gareth Southgate's winning playbook. She could even adapt the football song for Brexiteers about control "finally coming home." Success in Russia may be a huge boost to English morale but sadly all parallels between football and politics end right there. Brexit is a game played by one prime minister and her divided cabinet and in the end nobody wins.