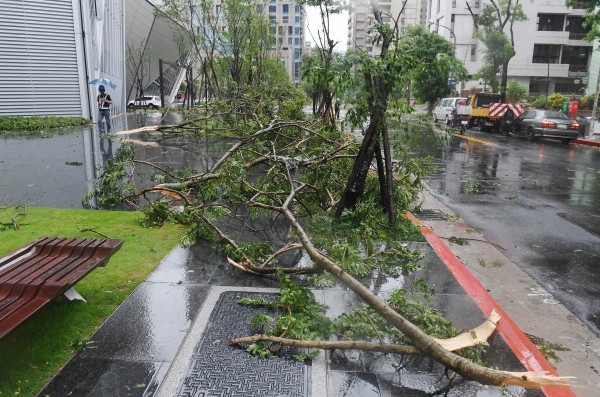 TAIPEI (Taiwan News) -- One person has reportedly died and eight people have been injured as the result of Typhoon Maria, according to TVBS and the Central Emergency Operation Center.

After lashing Taiwan since yesterday evening, the tail end of Typhoon Maria left the country by around noon today (July 11), and the Central Weather Bureau (CWB) lifted its land and sea warnings for the country at 2:30 p.m.

A man in New Taipei City accidentally fell to his death while inspecting his doors and windows early this morning (July 11) as wind gusts buffeted his home, marking the first reported death from Typhoon Maria, reported TVBS.

As of 2 p.m. this afternoon, the Central Emergency Operation Center reported eight people, all concentrated in northern Taiwan, had suffered minor injuries as a result of Typhoon Maria. The injured included seven men and one woman, whose injuries were mainly caused by being hit by tree branches or falling off their scooters.

Likely to be included among the injured was a female taxi driver in her 50s, who stopped by the side of the road in eastern Taiwan's Hualien and soon found herself clinging for her life of the ledge of a sea slope overnight as Typhoon Maria buffeted the country, before finally being rescued 14 hours later.

The Ministry of Economic Affairs said that 59,485 households lost power during the typhoon and 3,435 were still without power by 2 p.m. today.

According to statistics from the Executive Yuan's Council of Agriculture, the typhoon inflicted NT$1.3 million in damage on agricultural produce.

Typhoon Maria made landfall in Fujian Province's Lianjiang County at 9:30 a.m. while still packing wind gusts of up to 151 kilometers per hour.