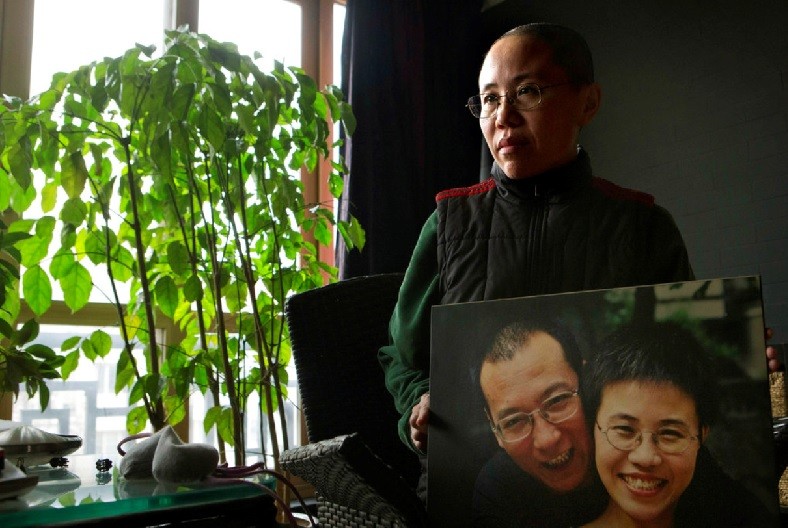 BEIJING (AP) — China allowed the widow of Chinese Nobel Peace Prize laureate Liu Xiaobo to be freed from house arrest and leave for Berlin on Tuesday, ending an eight-year ordeal that drove the poet into depression and drew intense criticism of Beijing’s human rights record.

The release of Liu Xia, who has never been charged with any crime, is the result of years of campaigning by Western governments and activists and comes just days before the one-year anniversary of the death of dissident Liu Xiaobo while he was serving a prison sentence for inciting subversion.

Liu Xia’s brother, Liu Hui, wrote on a social media site: “Sister has already left Beijing for Europe at noon to start her new life. Thanks to everyone who has helped and cared for her these few years. I hope from now on her life is peaceful and happy.”

Chinese Premier Li Keqiang is visiting Germany, a country that in May said it would welcome the widow after a recording was released of her crying in desperation and indicating she had lost hope of being able to leave China.

“Liu Xia has been kept isolated for so many years,” Wu said by phone from the southern city of Guangzhou. “I hope that being in a free country will allow Liu Xia to heal her long-standing traumas and wounds.”

Friends say Liu Xia has expressed a preference for going to Germany, where she has a circle of friends from China’s dissident and literary circles. German Chancellor Angela Merkel meets regularly with dissidents during visits to China and has raised Liu Xia’s case with Chinese officials, including during a visit in May, people familiar with the matter said.

China sentenced Liu Xiaobo in December 2009 to 11 years in prison on charges of inciting subversion of state power after he helped write a manifesto calling for political and economic liberalization.

Days after the Nobel Committee awarded him the Peace Prize in 2010, infuriating Beijing, Chinese authorities put Liu Xia under house arrest. State security assigned guards around-the-clock outside Liu’s Beijing home and restricted her access to the internet and the outside world, allowing her only occasional phone calls with a small circle of friends.

The news of her release was a rare piece of good news for China’s beleaguered community of activists, who have been at the center of an expansive crackdown on civil society, rights lawyers and other independent groups the administration of President Xi Jinping has deemed a threat to the ruling Communist Party’s grip on power. The last time a high-profile political prisoner was allowed to leave China was in 2012, when Beijing permitted the blind activist Chen Guangcheng to fly to New York after he escaped from house arrest and hid for six days in the U.S. Embassy in Beijing.

Several expressed concerns about the fate of Liu’s brother, Liu Hui, who has previously been convicted of fraud and sentenced to jail in a case supporters said was a form of retaliation against the attention the Nobel laureate was getting.

“This is fantastic news, something we have all been hoping against hope for a long time,” said Hu Jia, a family friend and Beijing-based activist. “But we still fear for Liu Hui, who is being kept in the country as a guarantee so that Liu Xia does not speak out abroad.”

A Chinese foreign ministry spokeswoman, Hua Chunying, confirmed Tuesday that Liu had left for Germany, saying she was seeking “medical treatment on her own accord.”

China has previously criticized calls by Western governments for Liu’s release, saying that foreign countries were making “improper remarks” over what Beijing sees as a domestic affair.

Officials have also insisted that Liu Xia was a free citizen — a clear contradiction of the reality on the ground, according to her friends and people who encountered guards blocking their attempts to visit her at her home in Beijing.

Liu’s friends in recent months have said her mental condition has steadily deteriorated, particularly since the death of her husband.

“If I can’t leave, I’ll die in my home,” Liu Xia had said during a recent phone call with her close friend Liao Yiwu, a writer who documented their conversation in an essay published in May.

“Xiaobo is gone, and there’s nothing in the world for me now,” Liu said tearfully. “It’s easier to die than live. Using death to defy could not be any simpler for me.”

An accomplished artist and poet, Liu told Associated Press reporters during an unexpected visit to her home in 2012 that she had anticipated China would punish her for her husband’s Nobel award, but she had not expected to be kept under “Kafkaesque” house arrest.

Rare images of Liu Xia were released by the authorities last year as she cared for Liu Xiaobo in his final days fighting liver cancer in a hospital under police custody.

The pale, bespectacled poet, who had long sported a shaved haircut, appeared gaunt and somber in most of the images. She was depicted attending Liu’s closely staged funeral dressed in black and wearing dark sunglasses as she clutched a photograph of her husband.

Her husband was only the second Nobel Peace Prize winner to die in police custody, a fact pointed to by human rights groups as an indication of the ruling party’s increasingly hard line against its critics. The first, Carl von Ossietzky, died from tuberculosis in Germany in 1938 while serving a sentence for opposing Adolf Hitler’s Nazi regime.

Frances Eve, a researcher for Chinese Human Rights Defenders, said Liu Xia’s “long-awaited” release was an “easy win” likely intended to stem the criticism around the upcoming anniversary of Liu’s death in custody.

“I think the government wanted to try and save face, and make it seem as though it is a country ruled according to law when everything about her case has shown demonstrably that it is not,” Eve said. “She has been an unwilling symbol of the brutality of China’s treatment of human rights activists.”