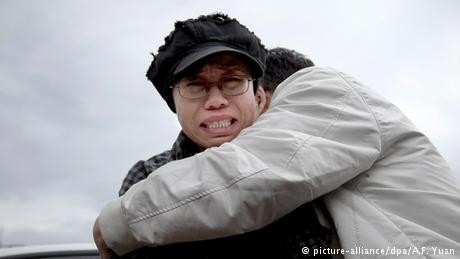 Liu Xia was never charged with a crime but has spent eight years under house arrest.

Her friends said she left China on board a Finnair flight bound for Europe on Tuesday. Her brother, Liu Hui, was not on the plane, they said. Two other friends told the German dpa news agency that Liu Xia was headed to Germany.

"Sister has already left Beijing for Europe at noon to start her new life. Thanks to everyone who has helped and cared for her these few years. I hope from now on her life is peaceful and happy," he wrote.

Campaigners have called for Liu Xia's release ever since the 57-year-old poet and artist was put under house arrest in 2010, days after her imprisoned husband, Liu Xiaobo, was awarded the Nobel Peace Prize. She has never been charged with any crime.

He had been sentenced to 11 years in prison on charges of inciting subversion of state power.

Liu Xiaobo died of liver cancer last July aged 61. He was a writer, critic and activist who called for political reforms and an end to one-party rule in China.

Chinese Premier Li Keqiang made a state visit to Germany on Monday and met with Chancellor Angela Merkel.

Berlin has been pushing China to let Liu leave the country following the death of her husband. In May, Germany said it would welcome the widow after a recording was released of her crying in desperation and indicating she was losing hope of leaving China.

Friends of Liu Xia had expressed concern for her mental health ahead of the first anniversary of her husband's death on Friday.

China has maintained that Liu Xia was free and accorded all rights guaranteed to her by law.

Western diplomats, however, disagree. They say Chinese authorities kept a close watch on her after the death of her husband and she was only allowed to meet and speak to friends and family in pre-arranged phone calls and visits.