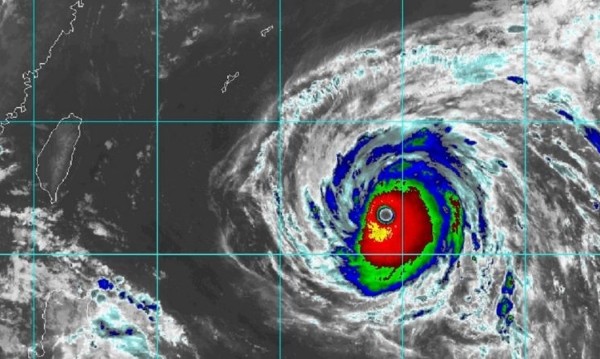 Update: 07/10 10:20 p.m. - Yilan County and the offshore island of Matsu still declared Wednesday a typhoon holiday, but Taipei City and its surrounding areas of New Taipei and Keelung delayed the announcement of their decision until 10 p.m. Tuesday.

Update: 07/10 7:29 p.m. - Just as its outer rim touched Taiwan Tuesday evening, Super Typhoon Maria was downgraded to Typhoon Maria as a result of unfavorable sea temperatures, according to the CWB.

Update: 07/10 10:24 a.m. - Official office and school closures were announced across northern and eastern Taiwan for this afternoon.

Update: 07/10 9:15 a.m. - Peng Chi-ming (彭啟明), CEO and founder of WeatherRisk Explore Inc. on his Facebook page predicted that the periphery of Super Typhoon Maria will make landfall at about 5 or 6 p.m. this evening.

Update: 07/09 2:30 p.m. - CWB issued a sea warning at 2:30 p.m. this afternoon (July 9), with a land warning likely before midnight. Since land warnings are issued 18 hours before the periphery of a typhoon impacts land, it can be deduced that the CWB is anticipating that the periphery of Maria will make landfall on Tuesday evening, around 6 p.m.

TAIPEI (Taiwan News) -- Super Typhoon Maria is poised to strike northern Taiwan on Tuesday (July 10) and it is anticipated that the storm will take a full day to pass over the country, according to the Central Weather Bureau (CWB).

As the category 5 typhoon nears Taiwan, a sea warning is likely to be issued this afternoon and as the storm is estimated to have a 90 percent chance of striking northern and northeastern Taiwan, a land warning is likely in the early morning tomorrow, according to the CWB. The typhoon is expected to first impact at some point in the afternoon on Tuesday and continue to affect northern Taiwan until Wednesday afternoon. Peng Chi-ming (彭啟明), CEO and founder of WeatherRisk Explore Inc., said that when Maria closes in on Taiwan, its power may weaken slightly, but it cannot be ignored. He emphasized that "this really is a powerful super typhoon," and Maria's structure is solid with a clearly distinct eye that is nearly 50 kilometers in diameter.

Peng even described the size of the typhoon's eye as being as large as the "Taipei Basin." When the storm strikes Taiwan, people from central, northern and northeastern Taiwan will all feel its effects, and therefore need to stay alert and monitor weather reports. From July 10 to July 11, it is estimated that flat areas of Taiwan will see 100 mm to 200 mm of rain and mountainous areas could see 200 mm to 400 mm of precipitation, with the weather finally clearing on Thursday morning (July 12). The New Taipei City Fire Department cited a weather risk company as having estimated that New Taipei could see as much as 400 mm to 550 mm of rain from July 10 through July 11.

Although Maria has not yet started to impact Taiwan today, northern and eastern Taiwan, the Hengchun Peninsula, and coastal areas of the Matsu Islands will see large waves, therefore people visiting coastal areas are advised to exercise caution. Eastern and southern Taiwan, as well as the Hengchun Peninsula are expected to see scattered showers today as the island starts to become influenced by the typhoon's periphery, reported Liberty Times. However, most of Taiwan will see clear skies and balmy weather, with highs in northern Taiwan reaching 35 to 36 degrees Celsius and the rest of the country reaching 33 to 35 degrees. CWB map of areas most likely to be impacted by Super Typhoon Maria.