Terry Gou, chairman of Taiwan-based manufacturing giant Hon Hai Precision Industry Co., said Friday that his company is planning to invest in the San Francisco Bay Area in northern California, as he is upbeat about the outlook of innovative start-ups.

Speaking at Stanford University, which is perceived as the heart of Northern California's Silicon Valley, Gou said that Hon Hai, known outside Taiwan as Foxconn, will pour funds into start-ups aiming to develop new technologies, such as artificial intelligence (AI) and big data, in the Bay Area.

In addition, Gou said, his company is also planning to cultivate a talent pool for AI and big data development in the Bay Area by providing scholarships to allow young people to continue research in these technologies.

Through Foxconn's funding, young talent in the Bay Area is expected to continue to penetrate the wide range of know-how and research in the industrial Internet arena and build up their experience, Gou said.

Earlier this week, Foxconn signed an agreement with the University of Cincinnati to co-develop industrial AI technology, according to Gou.

Hon Hai has placed great emphasis on integration among traditional manufacturing technology, precision manufacturing and industrial AI, so the efforts to develop AI and big data have been highlighted in the company's future development.

Before Gou came to northern California, he and U.S. President Donald Trump shared a stage for the second time June 28, when ground was officially broken for Hon Hai's US$10 billion investment to build an advanced flat panel production base in Racine County of Wisconsin.

The flat panel plant is part of Hon Hai's efforts to build the Wisconn Valley Innovation Network, which focuses on the development of applications for the AI, high definition 8K display and 5G technology ecosystem the Taiwanese firm aims to create through its major investment in the state.

According to a U.S. media report, Wisconsin's state and local governments are providing about US$4 billion in subsidies to Hon Hai for the US$10 billion investment, which is expected to create 3,000 jobs in an initial phase and a total of 13,000 jobs over the next six years. (By Edward Tsao and Frances Huang) 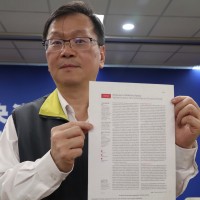