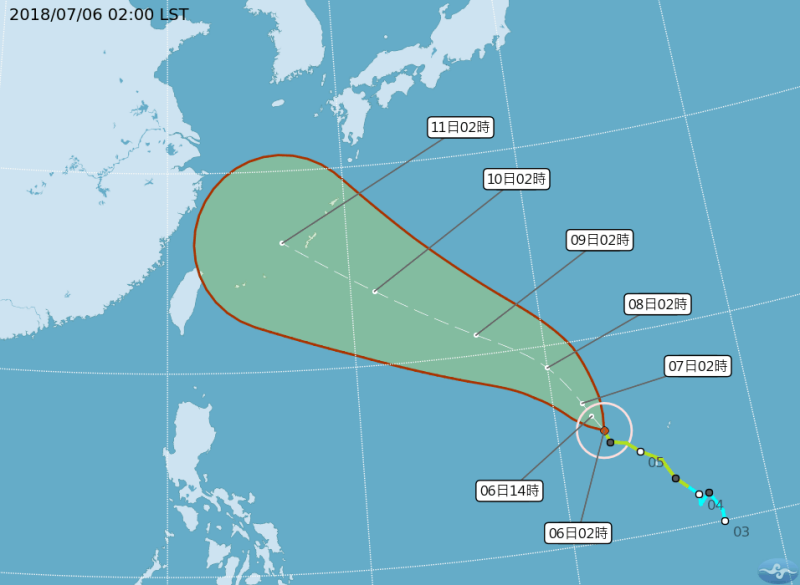 TAIPEI (Taiwan News) -- Tropical Storm Maria was upgraded to a typhoon early this morning (July 6) and the latest model of the storm's potential track area by the Central Weather Bureau (CWB) now has it possibly impacting northern Taiwan by July 11.

As of 8:00 a.m. this morning (July 6), Typhoon Maria is about 2,410 south-southeast of Eluanbi the southernmost tip of Taiwan with maximum wind gusts of 198 kilometers per hour and is moving at a speed of 13 kilometers per hour in a north-northwesterly direction towards Japan's Ryukyu Islands. Though the storm will have no direct impact on the weather in Taiwan this week, those headed to coastal areas should beware of large waves over the weekend.

Daniel Wu (吳德榮), an independent meteorologist and adjunct professor at National Central University, said that over the next five days Maria will first head due west before shifting to a west-northwest path. By 2 a.m. Wednesday, (July 11) Wu predicts that the storm will reach Japan's Ryukyu Islands, however there is a still a wide degree of uncertainty as to its precise path at this stage.

If a high-pressure system over the Pacific strengthens, Maria will veer more towards the south in the direction of northern Taiwan, if the high-pressure system weakens, it will spiral northward and will have less of an impact on the country. Wu emphasized that it is still too early to predict with certainty that the typhoon will directly impact Taiwan, therefore he recommends continued monitoring of the storm's path until a higher degree of precision can be achieved. Wu pointed out that the European Centre for Medium-Range Weather Forecasts (ECMMF) model predicts that the weather in Taiwan will become unstable from July 6 - July 8, with local thunderstorms developing in the afternoon, particularly in the mountains and low-lying areas. Due to the convergence of surface winds and southwesterly winds, southwestern Taiwan is currently under a heavy rain advisory, with local showers likely in that area.

Temperatures in Taiwan today will be balmy, with the mercury during the day ranging between 30 to 34 degrees Celsius, therefore, people are advised to wear proper sun protection during midday.

By Monday and Tuesday (July 9 and 10), the weather will be unstable in the afternoon and convection will be strong, with sporadic showers and thunderstorms likely in the afternoon. There is still a great deal of uncertainty what effect Maria will have on Taiwan's weather by Wednesday and Thursday (July 11 and 12), therefore further observation is needed, said Wu.