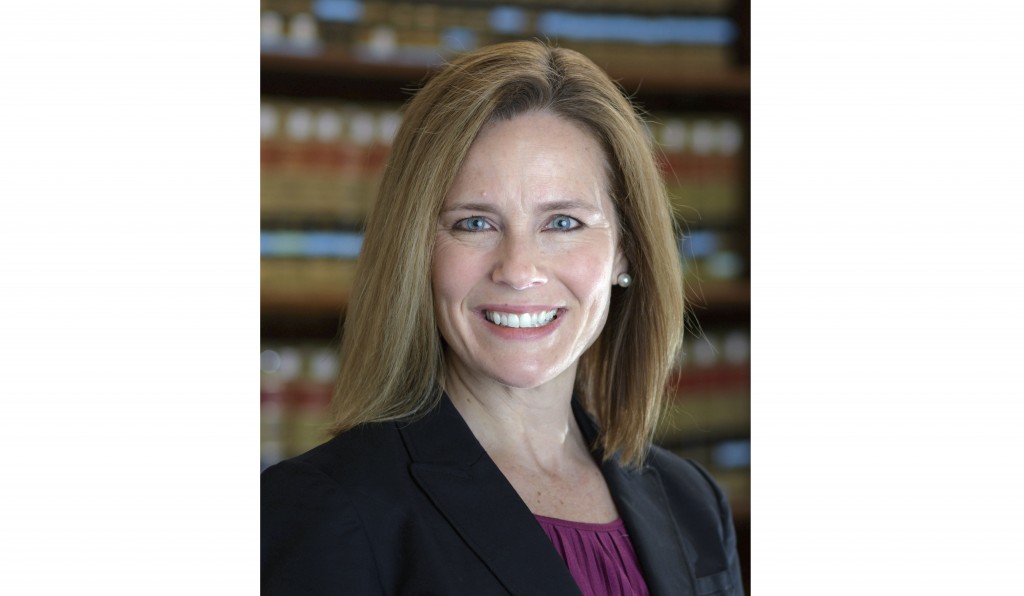 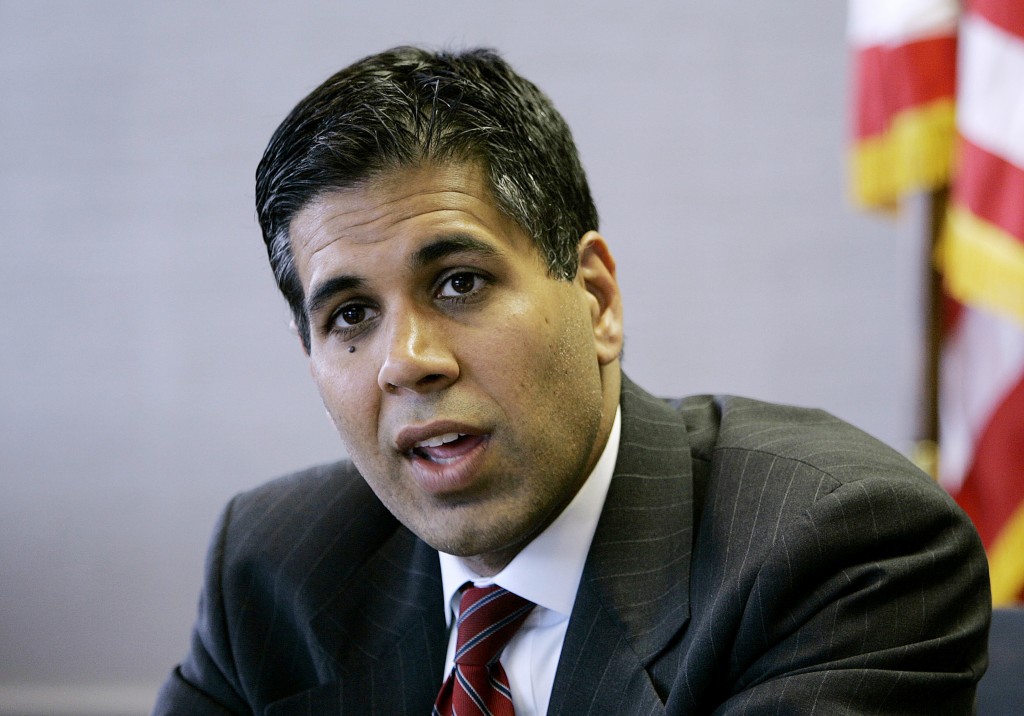 WASHINGTON (AP) — President Donald Trump's Supreme Court nomination is expected on Monday, with three federal judges leading the pack. Here's a look at who they are (plus three more who haven't been completely counted out just yet):

If nominated and confirmed, she would become the fourth female justice on the nine-member court and its youngest member (Justice Neil Gorsuch is now the youngest, turning 51 this August.)

At a Senate hearing last year on her nomination to the Chicago-based 7th U.S. Circuit Court of Appeals, Democrats peppered Barrett on whether her Roman Catholic faith would interfere with her work. Democrats cited a 1998 paper in which she argued that Catholic judges might need to recuse themselves in death penalty cases.

Democratic Sen. Dianne Feinstein of California told Barrett that dogma and law are two different things and she was concerned "that the dogma lives loudly within you." Barrett was eventually confirmed after telling senators that her views had since broadened. She said it was never permissible for a judge to "follow their personal convictions in the decision of a case, rather than what the law requires."

A White House questionnaire last year cited Barrett as once writing abortion is "always immoral" and asked if that was still her view. She didn't answer the question directly but said: "If I am confirmed, my views on this or any other question will have no bearing on the discharge of my duties as a judge."

During her 2017 confirmation hearing, Barrett described each of her seven children, noting that two were adopted from Haiti.

Kavanaugh, 53, is a Yale-educated appellate court judge for the U.S. Court of Appeals District of Columbia Circuit who clerked for retiring Justice Anthony Kennedy and is probably best known for his ties to President George W. Bush.

Kavanaugh also was key member of independent counsel Kenneth Starr's team that produced the report that served as the basis for President Bill Clinton's impeachment.

But he's attracting the most attention for his view that presidents shouldn't be bothered with legal inquiries. In a 2009 article in The Minnesota Law Review, Kavanaugh wrote that presidents are under such extraordinary pressure they "should be excused from some of the burdens of ordinary citizenship while serving in office."

Congress, he wrote, should pass a law that would temporarily protect the president from both civil suits and criminal prosecution. Clinton, for example, "could have focused on Osama bin Laden without being distracted by the Paula Jones sexual harassment case and its criminal investigation offshoots," Kavanaugh wrote.

"If the President does something dastardly, the impeachment process is available," Kavanaugh wrote.

That kind of thinking could prove helpful to Trump, who has been dogged by accusations of sexual harassment, as well as possible obstruction of justice in the Russia probe now being led by special counsel Robert Mueller.

But Kavanaugh's ties to Washington (he was born in D.C.) and the GOP establishment could hurt his chances too, as Trump's populist supporters clamor for an outsider and Democrats pan him as a political operative. (When he was confirmed to the federal appeals court in D.C. in 2006, Bush took the unusual step of hosting a Rose Garden swearing-in ceremony with 120 guests to celebrate.)

His judicial biography includes his times in two Boston Marathons, his coaching experience for his two daughters' basketball teams and his regular participation in services at a Catholic church in Washington.

Kethledge, 51, is a former Kennedy law clerk and appeals court judge who graduated from the University of Michigan and its law school. He serves as a judge on the U.S. Court of Appeals for the 6th Circuit in Cincinnati, Ohio.

He co-authored a book with Army veteran Mike Erwin of The Positivity Project published last year called "Lead Yourself First: Inspiring Leadership Through Solitude," in which he describes himself as an introvert. In an interview with the legal news site "Above the Law," Kethledge said "I love to write" and prefers working from his barn office in northern Michigan overlooking Lake Huron without an internet connection.

He was at that office when his wife called to tell him she had seen on television that he was on Trump's short list of nominees to replace Scalia, a job that eventually went to Justice Neil Gorsuch.

In the 1990s, Kethledge was counsel to Republican Sen. Spencer Abraham of Michigan, who became Bush's energy secretary. Kethledge eventually founded a boutique litigation firm with two partners in Troy, Michigan. He was nominated to the 6th Circuit Court of Appeals in 2006 and confirmed in 2008.

Kethledge's judicial opinions have occasionally made news. In 2013, he ruled against unions and upheld a Michigan law that bars school districts from collecting membership dues from teachers and other employees, leaving unions to collect the dues themselves.

In 2014, he ruled against the federal Equal Employment Opportunity Commission in a case it brought against a for-profit education company over its credit checks on potential employees, noting the EEOC performed the same checks. And in 2016 he wrote that police didn't need a warrant to look at records that reveal where a cellphone user has been, a decision the Supreme Court overturned in a 5-4 ruling earlier this year.

While Barrett, Kavanaugh and Kethledge are considered the top contenders, here are others who have factored into Trump's decision:

Thapar, 49, is a federal appeals court judge for the Cincinnati-based 6th Circuit Court of Appeals and is considered close to Senate Majority Leader Mitch McConnell. He was Trump's first judicial nomination to a district or appeals court, and on Trump's short list to replace Scalia last year, losing out to Gorsuch.

The son of Indian immigrants, Thapar would become the first Asian-American justice on the Supreme Court.

In one of his more interesting court cases, Thapar in 2014 as a district court judge in Kentucky sentenced an elderly nun to almost three years in prison for breaking into a U.S. storehouse for bomb-grade uranium and splashing blood on the walls of the bunker. She argued she was acting as a follower of Jesus Christ; Thapar said that provided no excuse for breaching the Y-12 National Security Complex in Oak Ridge, Tennessee. (An appeals court later threw out the sabotage charge, leaving the lesser charge of injuring government property and releasing her from prison early.)

An alumnus of Boston College and the University of California, Berkeley, law school, Thapar was confirmed last year to the federal appeals court despite Democrats' protests.

At the time, the liberal group Alliance for Justice called him an "ultraconservative" judge whose rulings allowed too much money in the political system and were too harsh on some criminals. Democratic Sen. Elizabeth Warren of Massachusetts argued that Thapar would "tilt the scales of justice in favor of the rich and powerful."

McConnell, R-Ky., countered by saying Thapar had "a reputation as a qualified judge with an impressive legal mind."

Hardiman, who turns 53 this weekend, is a federal judge who served with Trump's sister, Maryanne Trump Barry, on the Philadelphia-based 3rd U.S. Circuit Court of Appeals. He was a front-runner last year when Trump was looking for Scalia's replacement.

Raised in Waltham, Massachusetts, Hardiman was the first person in his family to attend college and paid for his education driving a taxi cab. He went to the University of Notre Dame, then Georgetown University for his law degree. He became a partner in a major law firm at age 30 and a federal district judge at 38.

Hardiman has sided with jails seeking to strip-search inmates arrested for even minor offenses and backed the collection of genetic evidence from people at the time of their arrest. He also has supported gun rights. He dissented in a 2013 case that upheld a New Jersey law to strengthen requirements for carrying a handgun in public.

Hardiman joined two 3rd Circuit colleagues in affirming the $1 billion settlement of NFL concussion claims, rejecting complaints that men with depression and mood disorders that some link to football concussions were left out of the deal.

Larsen, 49, was tapped by Trump last year for a seat on the 6th U.S. Circuit Court of Appeals.

A former clerk to Scalia, Larsen graduated from the University of Northern Iowa and Northwestern University School of Law. In 2015, Michigan Gov. Rick Snyder appointed her to the state's Supreme Court.

In her confirmation hearing last year, Larsen argued that she had ruled evenly in disputes between companies and individuals while on the Michigan high court. She also said she has never given any public indication or promised anyone that she would overrule Roe v. Wade or any other precedents.

Larsen spoke at Scalia's memorial service in 2016, praising his intellect, upbeat attitude and the opportunities he gave his clerks.

"What better preparation for any of us, male or female, than to have matched wits with the justice?" she said. "With each thrust and parry, we got sharper. What an incomparable gift to a young lawyer."

Contributing to this report are AP writers Michael Tarm in Chicago; Catherine Lucey and Jessica Gresko in Washington; Dan Sewell in Cincinnati; and Ryan J. Foley in Iowa City, Iowa.