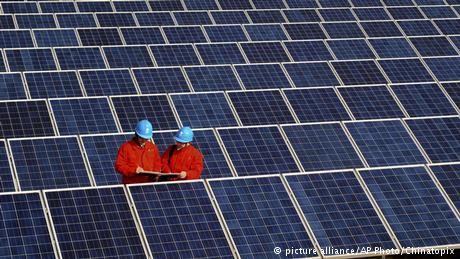 China is the world's top CO2-emitting nation: its carbon dioxide emissions have grown enormously over recent previous decades, and now make up nearly one-third of the global total.

Now, a study finds that the country may already have passed peak emissions: carbon emissions are decreasing.

China's CO2 emissions have gone down every year from 2014 onward, according to a research team from China, the United Kingdom and the United States.

This emissions drop is coming much sooner than other scientists had predicted: British researchers, for example, had expected peak emissions not to occur before 2025.

"The fact that China's emissions have decreased for several years — and more importantly the reasons why — give hope for further decreases going forward."

It's "cause for cautious optimism," they say.

Cheap and dirty is 'out'

If the drop were just a byproduct of an economic crisis, there wouldn't be much cause for optimism: CO2 emissions would just go back up as soon as the economy flourishes again.

And indeed, economic growth in China has slowed in recent years, which has made it easier to reduce emissions.

But lead author Dabo Guan of Tsinghua University in Beijing tells DW that according to their investigation, slowed economic growth is not the main reason for the drop.

China is undergoing a structural change, with emissions-intensive factories moving out of the country, he explains.

"A few years ago, 90 percent of all running shoes, for example, were made in China. Now, the expensive ones are coming from China, while the cheaper brands are being manufactured in Vietnam, Cambodia, Mexico or other countries."

The same is true for electronic products like smartphones.

Read more: Smartphones — not so smart for the planet

This shift to higher-value manufacturing and to the service industry has transformed China, bringing about a drop in emissions-intensive iron and steel processing, coking, cement and coal production.

"A 2013 peak is far sooner than anyone thought possible when Chinese President Xi Jinping first made the pledge in 2014," the researchers write.

Lina Li, project manager with adelphi, a think tank and public policy consultancy on climate, environment and development, agrees with Dabo Guan and his colleagues that the decline in CO2 emissions is not by accident.

"It's partially thanks to the accelerated domestic climate and energy policies in recent years, as well as the economic structural change that China is going through."

Pictures of intense air pollution in Chinese cities have gone viral around the world.

While new policies primarily target fine particulates in the air, they are also leading to a reduction in coal consumption — which brought CO2 emissions down as a side effect.

For example, the Chinese government has limited the development of new coal-fired power plants since 2013, and phased out older, smaller plants.

Coal consumption declined by an average of 5.6 percent per year from 2013 on. The largest decreases occurred in the electricity sector.

But that extra energy is coming from renewables — and from nuclear power.

While everybody might agree that China's surge in renewable energy is a positive sign, others are doubtful if extending nuclear power is the right way to go.

"China is building about 12 new nuclear power plants," Dabo Guan says. "Coal is too dirty, and renewables are not very stable. So nuclear is seen as a strategic energy source for the future."

Even the Fukushima nuclear disaster didn't do much to dampen China's enthusiasm for nuclear power, he adds.

"Most Chinese people trust that the nuclear waste [problem can be solved] — or they simply don't care. Compared to Germany, the public perception is very different."

Read more: Nuclear waste: Where to store it for eternity?

Even with nuclear power as a backup, the researchers argue that it's still unclear whether this slight drop in emissions will persist — or even continue dropping to levels necessary to halt climate change.

"China's emissions may fluctuate in the coming years and that may mean that 2013 may not be the final peak," they write.

New energy and climate policies might have caused a "one-time decrease in emissions that is not easily repeated."

That makes sense: If you've already closed down all the older, inefficient power plants, then it would indeed be hard to repeat that measure next year.

But the most important climate question might be: If emission-intensive industry is moving out of China, where is it moving to?

Other countries could take China's place

The IPCC, the United Nations' climate science body, has forwarded the notion that if China's emissions peak, then global emissions will have reached their highest point, too — and start to drop worldwide from that moment on.

But that's a big assumption. Dabo Guan cautions that the problem could simply move to other parts of the world.

"We need to stop another emission giant from growing instead — like India, Indonesia or the African countries."

China also plays a big role in making sure this doesn't happen, Guan says, by helping other developing countries to build out their know-how and appropriate technology to tackle climate change.

"If China can adeptly manage to combine its future domestic reform and transition plans with a smart global climate leadership agenda, the world would become a better place — as would China itself."