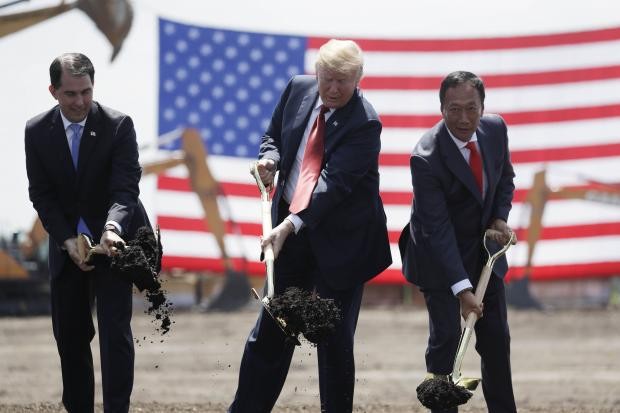 In a statement, Hon Hai, also known as Foxconn in the global market, said it has signed an agreement to buy the six-story Watermark building located in the industrial city of Green Bay, northeast Wisconsin, and will turn the building into an innovation center by the end of this year.

The innovation center is also part of Hon Hai's efforts to expand its Wisconn Valley Innovation Network by focusing on the development of applications for an artificial intelligence, high definition 8K display and 5G technology ecosystem the Taiwanese firm aims to create through its major investments in the state.

According to Hon Hai, the 7,500-square-foot innovation center will be part of a network run by the Taiwanese manufacturing giant to support its huge Racine County plant in southeastern Wisconsin.

The upcoming innovation center, which will have a staff of about 200, is expected to become a hub connecting Hon Hai's supply chain partners in the state, Hon Hai said.

The Green Bay office will serve as another innovation network hub for Hon Hai in Wisconsin after the company chose Milwaukee earlier this year as its headquarters and innovation hub in North America.

Hon Hai spokesman Louis Woo, who is also special assistant to company Chairman Terry Gou, said as a long term partner of Wisconsin, the Green Bay innovation center is expected to cultivate a talent pool for economic transformation in the state.

Amid Trump's praising of Gou as one of the most successful businessmen in the world, the construction of the sophisticated flat panel plant started with a total of investment of US$10 billion.

It was the second time Trump and Gou have shared a stage since they announced the firm's first Wisconsin deal in July 2017 as part of Trump's efforts to bring manufacturing jobs back to the U.S.

"Foxconn's decision to expand its Wisconn Valley Innovation Network to northeastern Wisconsin is yet another example of the 'Foxconn Bonus' that goes above and beyond the company's historic investment in Racine County," Wisconsin Governor Scott Walker said in a statement.

According to a U.S. media report, Wisconsin's state and local governments are providing about US$4 billion in subsidies to Hon Hai for the US$10 billion investment, which is expected to create 3,000 jobs in an initial phase and a total of 13,000 jobs over the next six years. (By Pan Chih-yi and Frances Huang)