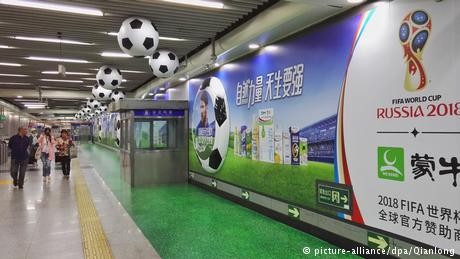 What's Messi drinking? Smiling in anticipation of victory and with a thumbs-up, the Argentinian football star is standing in front of an advertisement with a small white drink carton in his hand. The logo in the background is in Chinese, as is the small-print on the packaging. The slogan is in broken English: "Power of Nature, Born of Greatness."

What's the commercial for? A protein supplement for bodybuilders? But that would be doping. It's obvious to any Chinese person that the product is milk produced by Mengniu Dairy Company. Mengniu literally means "Mongolian cow." The Chinese brands which are now visible at every World Cup match are Wanda, Hisense, Mengniu and Vivo.

People who do not speak Chinese can only guess as to what is being advertised. One non-Chinese speaking Twitter user said that he would buy a Wanda and put it in his Vivo without realizing that the first is the biggest real estate company in China and the latter one of the country's most popular mobile phone companies.

Wanda, Mengniu, Vivo and electronics giant Hisense are among the 12 most important official Soccer World Cup sponsors this year. Advertising revenue will amount to a total of $2.4 billion, with $835 million coming from Chinese companies even though China is not even competing. The message for viewers in China that their country is more visible than the goalscorers.

And viewers outside of China are becoming acquainted with Chinese brands even if they cannot yet buy all their products (in any case, some might not be that tempted by Mengniu's cheese and mango-flavored yogurts). Chinese brands are now among the "most valuable brands" alongside CocaCola, McDonald's or Adidas. The derogatory nature of the "Made in China" label is a thing of the past. There is no doubt that it makes sense to advertise at the World Cup - in 2014, it was watched by 3.2 billion people, some 43 percent of the global population.

But China does not only want to advertise at the World Cup. It wants to play because football means soft power. President Xi Jinping is a big football fan and hopes that China will host the World Cup in 2030 and win in 2050, which seems to be more ambitious than China's first mission to Mars in 2020. So far, China's national team has only once qualified for the World Cup - in 2002 when Japan and South Korea hosted. But China came bottom of its group with 0 points, 3 defeats and down 9-nil.

In the meantime, Chinese companies are doing everything to pave the way. And FIFA is of course pleased since China is a growing market with plenty of money. The FIFA corruption scandals do not seem to have made a major difference to Chinese companies wanting to cash in on the sport, while Japan's Sony and Germany's Continental parted ways with FIFA in the wake of several high-ranking officials being arrested.

The corruption scandal put a dent in FIFA's accounts - it had been able to accumulate $1.63 billion ahead of the World Cup in Brazil in 2014, while before this year's championship it was only able to collect $1.45 billion. FIFA only sold 19 of the 34 sponsorship packages that it offered.

Read more: Is there any substance to China's football revolution?

So Chinese companies spotted their chance and offered themselves as partners, as Beijing does on the political world stage when others make themselves scarce. In March 2016, the Chinese multi-billionaire Wang Jianlin's Wanda Group signed a sponsorship agreement and became an official FIFA partner, thus helping to rescue the football association's image a little. In China, nobody judges the increasing commercialization of football or accuses the sport of "selling out." On the contrary, it's actually a fundamental condition so that the sport can get a foothold in China.

China's Super League is also drawing international football stars and coaches by paying top salaries. The aim is to attract more people to the television screens and into the stadiums. Top Chinese clubs are also exchanging experience and players with European clubs to gain more experience and improve the general level.

The German Football Association (DFB) is also very much involved in Chinese youth work, having understood that there is a lot of money to be made with China. Bundesliga club Schalke 04 has signed advertising deals with Hisense, the fourth-biggest TV maker in the world, the mobile telephone maker Huawei and the online gaming company K8, which has filled the club's coffers, and those are just a few of many examples. Between 2015 and 2017, Chinese investors pumped about $2.5 billion into international clubs, from Inter Milan to Manchester City.

Wang Jianlin seems to be the most energetic in this regard. His Wanda Group owns a fifth of Spain's top Atletico Madrid club, whose new stadium - which opened last year - is called Wanda Metropolitano. Every year, 30 under-18 Chinese football players come to train with the professional players as part of the "China's Future Soccer Stars" program.

But that's not all. In 2015, Wang bought the powerful Swiss sports marketing business Infront, which gave Wanda the broadcasting rights for the 2018 and 2022 World Cups. Wang also wants to help President Xi Jinping to get China to host the 2030 World Cup. He has the right friends, such as Philippe Blatter, the nephew of former FIFA head Sepp Blatter, who is not only the CEO of Infront but also of Wanda Sports Holding.

The only thing missing now is a good team that can score goals. That could take a while, though.