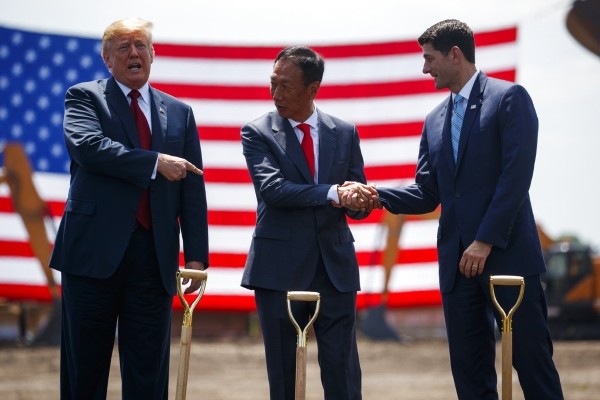 During a speech held after the ground breaking ceremony, Trump said, "As Foxconn has discovered, there is no better place to build, hire and grow than right here in the United States. America is open for business."

The 20-million-square-foot campus, to be located in Racine Country in the southeast of the state will produce liquid crystal display (LCD) panels for computers, tablets, televisions, self-driving vehicles, security monitors and medical devices. The project is estimated to cost US$10 billion, with state and local governments pledging over US$4 billion in tax incentives for the company.

It is expected that the factory will be operational in 2020, and will provide 13,000 jobs to support the local economy with an annual salary averaging US$54,000. Foxconn has likewise pledged to invest a certain amount of its annual profits into state parks and programs.

Many view Foxconn's decision to build its first plant outside of Asia in the U.S. as a way to hedge against the growing trade war. Gou specifically chose the state of Wisconsin after being pressured to do so by Trump and Ryan, whose district stands to benefit from the plant.

Trump is hoping that the new plant will help his party in the mid-term elections, including Wisconsin's governor Scott Walker, who is up for reelection. Trump won Wisconsin in the 2016 election by a narrow margin of less than one point, but his latest hostile comments about Milwaukee-based Harley Davidson's plans to move some production overseas to avoid tariffs has dropped his support in the state with 50 percent disapproving of the job he's doing and only 44 percent approving.