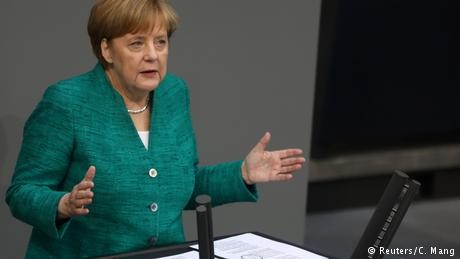 Chancellor Angela Merkel has told the German parliament that a European arrangement to solve the problem of asylum applications has not yet been reached.

"We're not yet where we want to be," she said, in an unusually passionate and succinct speech to a lively chamber frequently marked by heckling from the far-right Alternative for Germany (AfD) and applause from her own Christian Democratic Union (CDU) members.

She said that two points of a seven-point plan being hashed out with European partners remained controversial and would need to be resolved over the next two days. One of these, she said, was the EU directive on granting and withdrawing international protection, where members still needed to find common standards for providing asylum.

The other point of contention is the reorganization of the so-called Dublin procedures, which regulate where asylum applications have to be dealt with, and how asylum-seekers are distributed across the bloc.

Merkel said that asylum-seekers in the EU "should not be able to choose" in which EU country they apply for asylum. "Europe has many challenges, but migration could become a question of fate," Merkel told the parliamentarians.

If she fails to find a "European solution" to the question of how to distribute and organize asylum applications, the pressure on her at home, particularly from her conservative allies in Bavaria, the Christian Social Union (CSU), will become more difficult to manage. Should that alliance break down, there would probably have to be new elections and Merkel's chancellorship would likely be over.

In recent weeks prominent CSU figures, particularly Bavarian State Premier Markus Söder, have complained noisily that no such EU-wide agreement has been reached in the last three years, when the initial influx of refugees, many fleeing the Syrian war, came to Germany. Merkel countered this argument directly on Thursday, saying it was "not true" that nothing had happened in the last three years.

For one thing, she argued, the EU had made agreements with countries of origin to make limited migration legal, and had declared countries in the western Balkans as "safe countries of origin," which meant asylum applications from those countries could be rejected more quickly. "In exchange, we have made work permits possible for jobs that are available here, and this system works by and large very well," Merkel said.

She also insisted that finding a solution to the underlying problem of migration would only be possible via cooperation with African countries, like the dialogue that had been sought with Turkey in the aftermath of the 2015 refugee crisis.

AfD co-leader Alexander Gauland, who as leader of the biggest opposition party spoke first in response to the chancellor, dismissed all these carefully laid out plans, demanding only that Germany "close the borders, withdraw from all resettlement programs, and help those who really need help where they are."

"Stop importing endless problems into our countries," he said, before adding that a European solution was a dream.

Nevertheless, Merkel repeated the mantra that has been repeated by her party for the past several weeks: that there is no difference between Germany's interests and the EU's interests. "Germany will only do well if Europe does well," she said.

Merkel defended her decision to open Germany's borders late in 2015 to a group of asylum-seekers, describing it as the "right decision" in an "emergency situation" that was made in conjunction with the Austrian government. She went on to carefully spell out the legal justifications for the decision: in other words, the fact that in emergency situations EU agreements allow for nations to make unilateral decisions.

"This emergency situation no longer exists today," Merkel continued. "The number of new arrivals is significantly lower, which is why the same legal situation as before 2015 applies again today."