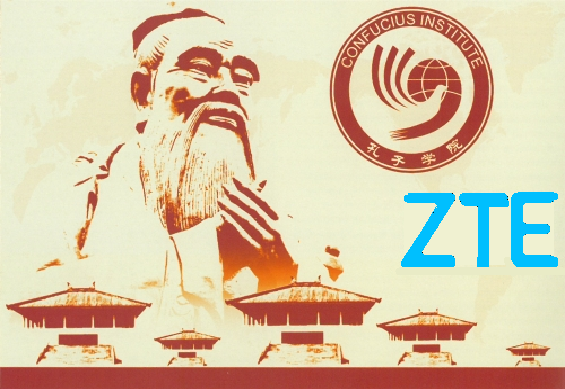 TAIPEI (Taiwan News) – The controversy surrounding China’s ZTE corporation in the United States may have just taken a much more serious turn, with implications that the well-known Confucius Institute, in league with the telecom company may be acting as a massive surveillance network for the Chinese government in the U.S. and throughout the world.

Reports are emerging from the U.S. government and independent media, that the Confucius Institute, which ostensibly manages cultural and educational centers operating at over 100 U.S. universities, has been acting in league with ZTE to establish espionage hubs in the United States and elsewhere.

The Liberty Times reports that in an effort to help the ailing ZTE secure funds, the Confucius Institute has stepped in to promote ZTE products in its offices and through various activities and programs at universities throughout the world.

That alone is not surprising, that the Institute would seek to promote Chinese products in its offices overseas. However, several recent events involving the U.S. Congress suggest that the story goes much deeper.

In February, FBI director Christopher Wray testified that the FBI had been conducting an investigation into the Confucius Institute for some months, under suspicion that the centers, located at major universities, were being used for political purposes, and potentially for espionage.

Even more recently on June 5, legislation (H.R. 6010) was introduced into the U.S. House which would require the Confucius Institute to register under the Foreign Agents Registration Act of 1938. Should the legislation pass the cultural and educational centers will be required to disclose all of their operational funding to the U.S. government, or face potential closure.

Although the intelligence reports available to the U.S. intelligence community and various congressional committees remain classified, a picture seems to be emerging that many in the U.S. government are very skeptical of the Confucius Institute.

The Daily Beast released a report on June 27 claiming that the Confucius Institute and ZTE Corp. have been working closely together for more than a decade. From the report:

The institute has been criticized in the past for spreading Communist propaganda in western universities and for practicing censorship, while threatening to withhold funds if the Chinese government felt the host school was promoting something that the Communist party perceived as painting China in a negative light, or for promoting “separatist activities.”

Now however, it seems that the scrutiny aimed at the Confucius Institute is moving far beyond the academic world and popular media, and into the realm of international espionage.

After the increased attention given to the Chinese telecom giant ZTE in recent months by the U.S. government, it appeared that they had successfully avoided any serious consequences for violating international sanctions involving Iran. They received a sudden reprieve thanks to the intervention of President Trump, a decision he reportedly made as a direct favor to Xi Jinping.

However, last week Donald Trump found himself negotiating with Senators over the harsh penalties for ZTE, as the Senate unanimously seeks to re-impose them as part of the 2019 NDAA legislation package, which would effectively nullify Trump’s abrupt decision to lend a lifeline to the company.

It remains to be seen if the Senators will convince Trump to back track on his favor to the Chinese telecom giant, which was likely a direct favor to the Chinese government. But in light of the new allegations regarding ZTE and the Confucius Institute, along with pressure to pass the NDAA, it seems a re-application of the original penalties, resulting in a severe blow to the business of ZTE, may yet be in the cards.