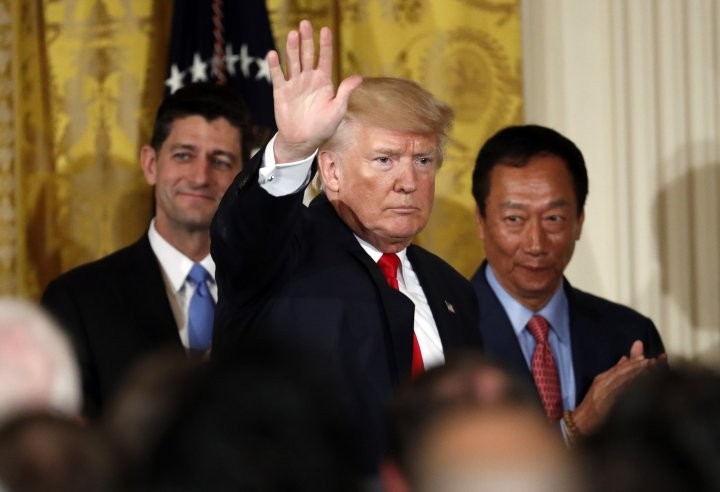 TAIPEI (Taiwan News) – U.S. President Donald Trump will be heading to Wisconsin this week for the June 28 groundbreaking ceremony for the construction of a massive Foxconn factory.

The president of the Taiwanese company Foxconn (鴻海), Terry Gou, announced the factory plans last year during a visit to the White House on July 1. The plans were approved by the state legislature of Wisconsin in November.

The groundbreaking ceremony will be the first such corporate event that Trump has attended since he took the office of president. According to NBC, Trump will be joined at the event by Speaker of the House Paul Ryan, and by Wisconsin Governor Scott Walker.

He is also expected to give a speech at the ceremony to mark the occasion. In July last year, when the event was announced, Trump referred to Foxconn chief Terry Gou as a friend, a great businessman, and one of the world’s greatest entrepreneurs.

The factory, to be located in Racine Country in the southeast of the state will produce liquid crystal display (LCD) panels for computers, tablets, and televisions. The project is estimated to cost US$10 billion, with state and local governments pledging over US$4 billion in tax incentives for the company.

It is expected that the factory will be operational in 2020, and will provide 13,000 jobs to support the local economy with an annual salary averaging US$54,000. Foxconn has likewise pledged to invest a certain amount of its annual profits into state parks and programs.

While many are excited at the economic stimulus that the project is expected to bring to Wisconsin, and Republican lawmakers are looking forward to Trump’s visit ahead of the midterm elections, some are less than enthusiastic.

Many in the the state are angry over a tiff that developed in recent days over the administration’s trade policies, between the President and the Milwaukee based Harley Davidson company.

NBC reports that a protest against the factory’s construction is being planned the day of the groundbreaking ceremony, because many are angry that the project will siphon off large amounts of Lake Michigan water, also because they claim that is it a seizure of private property and a misuse of public funds.

Many in the state are also concerned about Foxconn’s stated goals of automating its production facilities. They worry that the company may eventually do the same with the planned facility in Wisconsin.

At the ground breaking ceremony, Trump is expected to promote his vision of the revitalization of manufacturing in the United States. It is also expected that Trump will meet privately sometime during the day for discussions with Terry Gou.