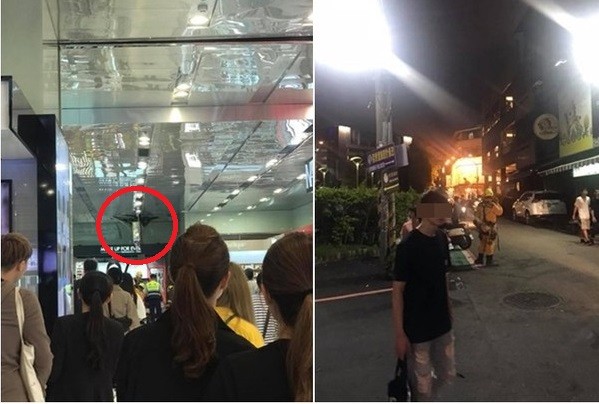 TAIPEI (Taiwan News) -- Shoppers in the Chungyo Department Store in Taichung City were horrified to witness a 18-year-old man suddenly crash though the ceiling onto a cosmetics counter after apparently leaping off the 14th floor, reported ETtoday.

On Monday evening (June 25), the Taichung fire department received a call that at 7:07 p.m. a person had jumped from the 14th floor of the Chungyo Department Store. Seven emergency vehicles carrying 25 firefighters and paramedics were immediately dispatched to the scene.

When rescuers arrived on the scene, they found the young man had smashed through the ceiling of the first-floor cosmetics department and landed on a counter on the first floor. Paramedics found that he was initially showing no vital signs and immediately rushed him to China Medical University Hospital for emergency treatment.

Witnesses said they saw a person sitting on the railing of the top floor and appeared to be poised to leap. Police rushed to the spot where he was last seen on the railing, however he had already jumped.

After an initial investigation, the police found that the man, who was identified by his surname Chen (陳), was not an employee of the store, but he had left what appears to be a suicide note in a notebook near the spot where he jumped. At the beginning of the note it read, "I like freedom, I love Mom" and that he hoped that his mother would let him leave.

Most recent reports state that Chen is undergoing emergency medical treatment. Police are investigating the exact cause of the incident.

Those considering suicide should immediately call the Suicide Prevention Center at any time at 0800-788995 or Taiwan Lifeline International at 1995. Foreign residents can call the Community Services Center's emergency hotline at 0932-594-578 24 hours a day.