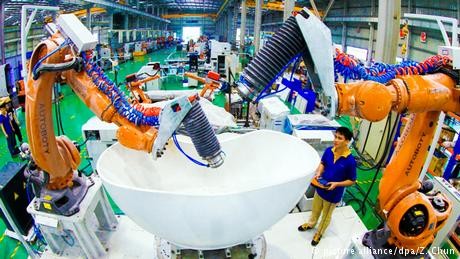 The US Treasury is drafting curbs that would block firms with at least 25-percent Chinese ownership from buying American companies with "industrially significant technology," an unnamed government official told Reuters.

His comments to the news agency matched a report by The Wall Street Journal which also said the ownership threshold might still change before the official announcement of the planned restrictions is made on Friday.

Tariffs on $34 billion (€29 billion) worth of Chinese goods are due to take effect on July 6 over US complaints that Beijing is misappropriating US technology through joint venture rules and other policies.

The Treasury's investment restrictions are expected to target key sectors that China is trying to develop as part of its "Made in China 2025" industrial plan. The latter was designed to eventually make the country a global leader in IT, aerospace, marine engineering, pharmaceuticals, advanced energy vehicles, robotics and other high-tech industries.

The Wall Street Journal also said the US Commerce Department and National Security Council were proposing enhanced export controls to keep technologies from being shipped to China.