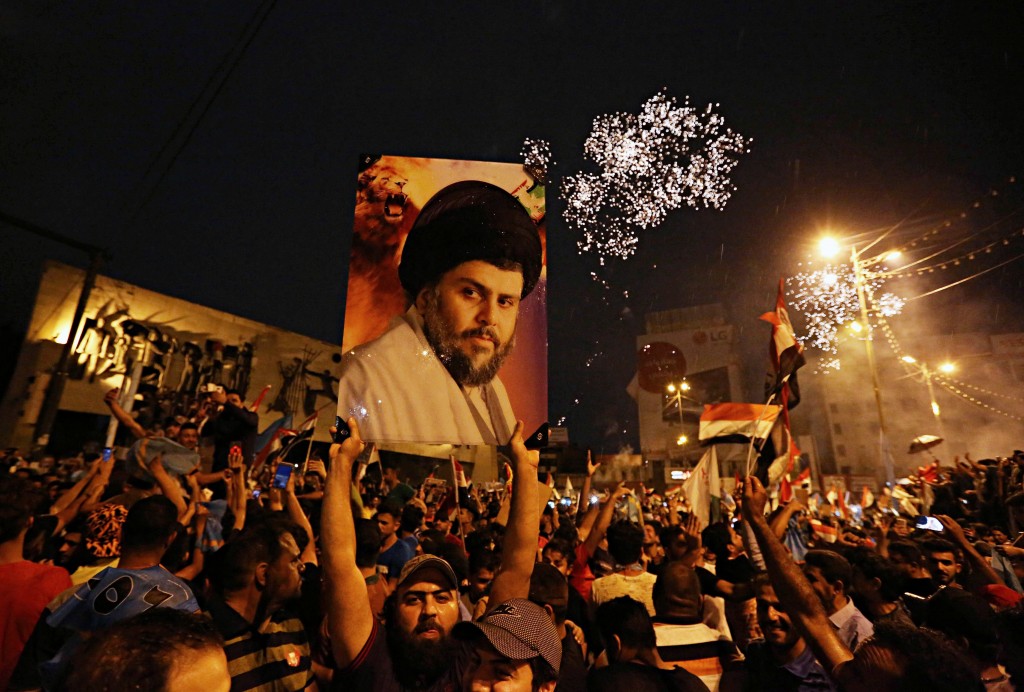 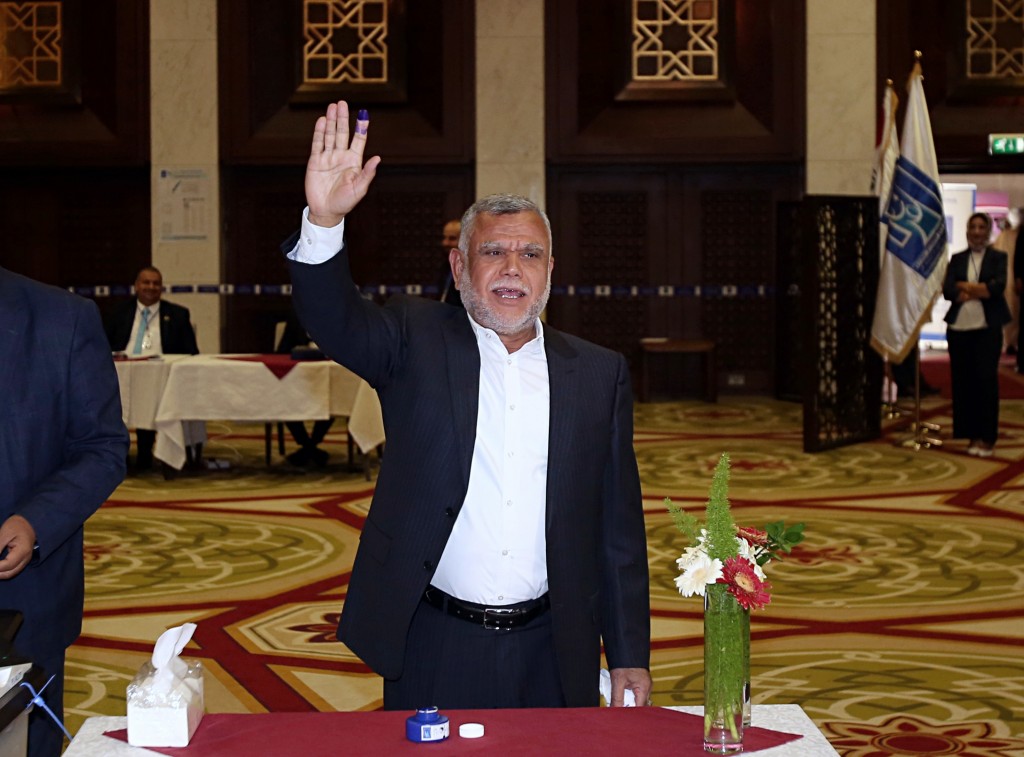 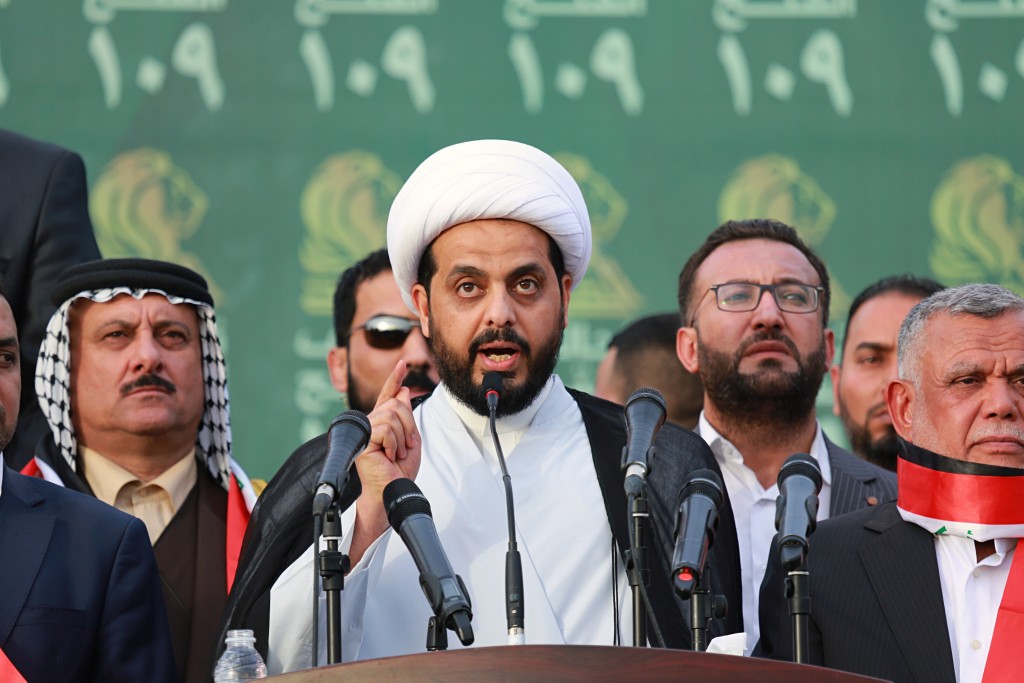 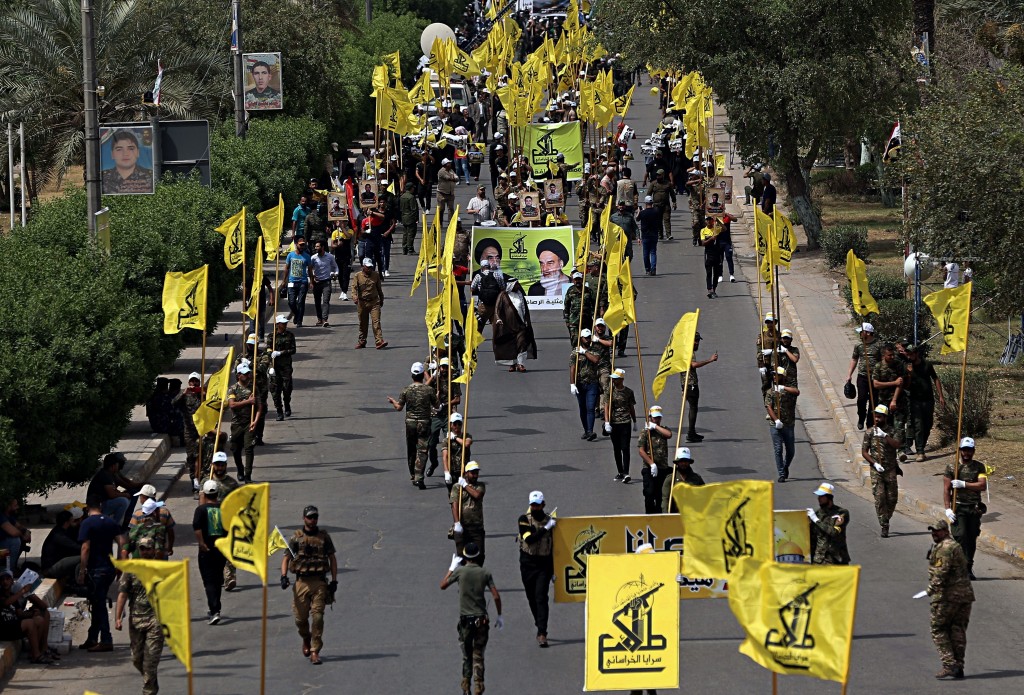 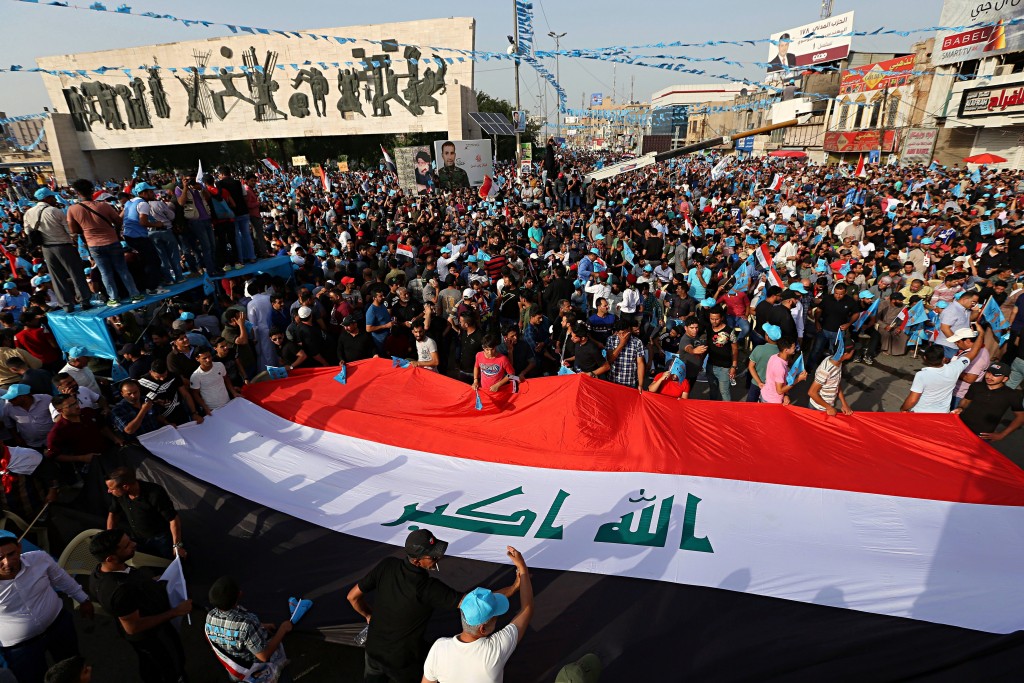 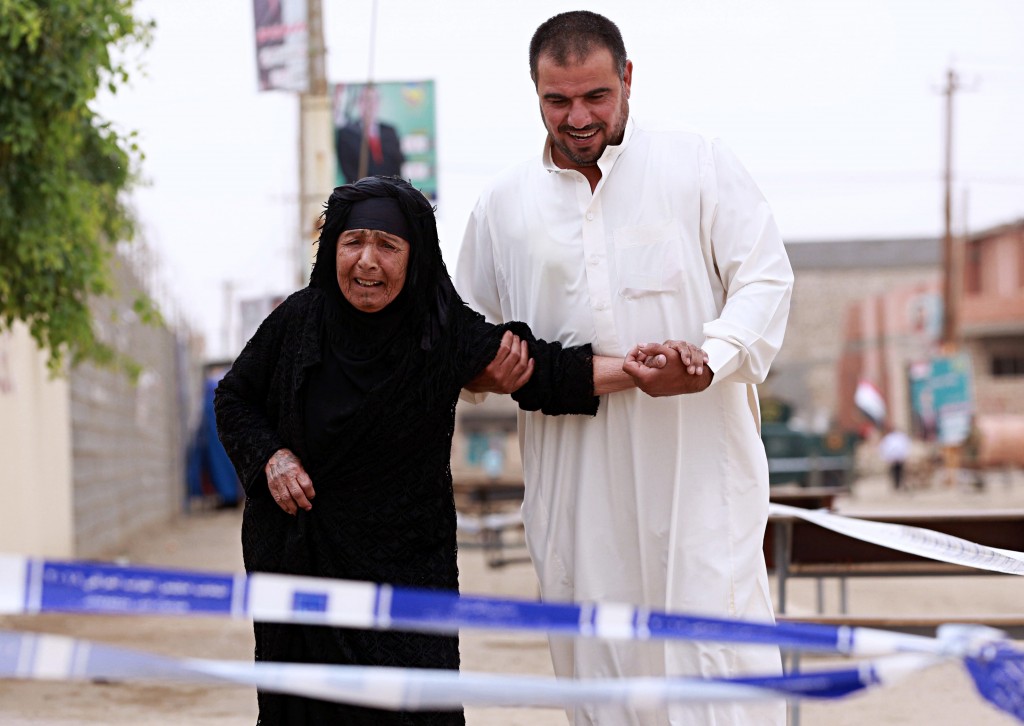 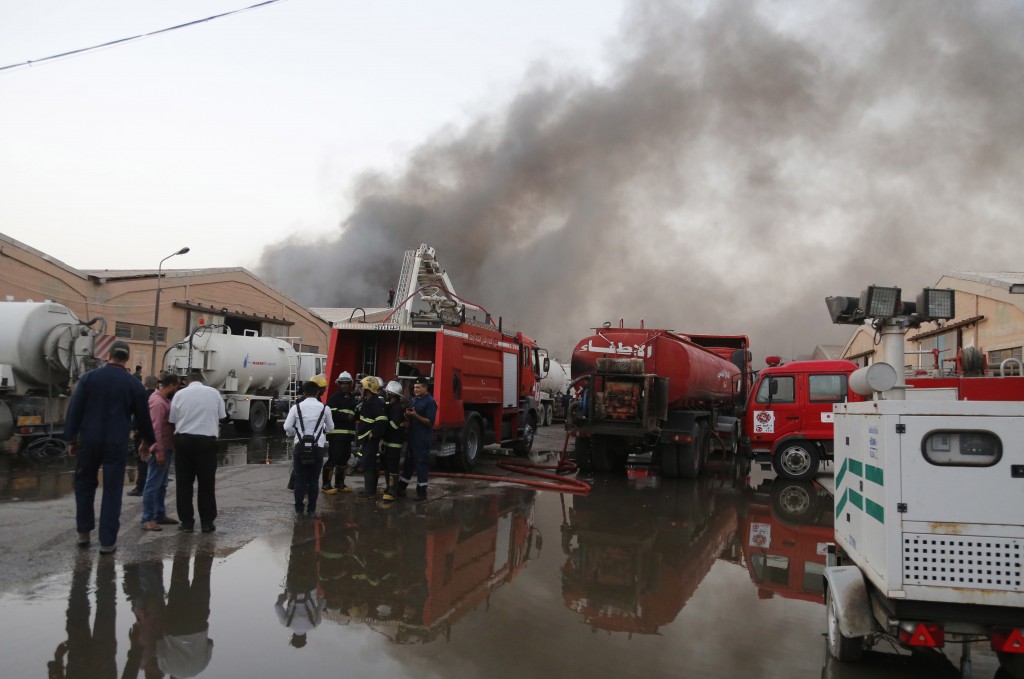 BAGHDAD (AP) — Muqtada al-Sadr, the maverick Shiite cleric who emerged as the main winner in Iraq's parliamentary elections last month, campaigned on a platform to end sectarian politics and replace it with a government that puts Iraqis first.

Instead, he has forged a postelection coalition with a rival Shiite bloc that includes some of the most powerful militias operating in Iraq — groups that get their funding and support from Tehran.

The deal underscores the active role Iran is taking in shaping the next government of Iraq, sending key military and spiritual advisers to revive a grand coalition of Shiite parties as a conduit for its influence in Baghdad. It also illustrates how Iran has gained sway over al-Sadr, who once called for booting foreign influence from Iraq.

Two Shiite politicians with inside knowledge of the party talks told The Associated Press that the new coalition between al-Sadr's Sa'eroun bloc and Hadi al-Amiri's Fatah bloc came on the heels of intensive Iranian lobbying, including visits by the influential Gen. Qassem Soleimani and the highly respected son of Iran's Supreme Leader Ayatollah Ali Khamenei, who met with al-Sadr earlier this month.

They spoke on the condition of anonymity because of the sensitivity of the talks.

For Iraqi voters, after delivering what was supposed to be a pivotal election result that looked beyond religious affiliation, the coalition means a dispiriting return to business as usual.

"This coalition is a product of Iran's desire to influence internal forces in Iraq," said Wathiq al-Hashimi of the Iraqi Group for Strategic Studies. "But besides the Shiite National Alliance, there will be a Sunni alliance and a Kurdish alliance, and a return of sectarianism among all the armed blocs and factions... This is the most dangerous thing in Iraq right now."

With no single party winning the majority of seats, the various blocs need to form coalition in order to name a new government.

On Saturday, the coalition was joined by incumbent Prime Minister Haider al-Abadi, another Shiite leader, whose bloc came in third in the elections. It could soon include other Shiite parties that underperformed at the polls.

Al-Abadi campaigned on a cross-sectarian platform and included Sunni politicians in his bloc. But the bulk of the winning candidates on his list were Shiites, and al-Abadi is the chairman of Islamic Dawa, a Shiite Islamist party that formed the core of the governing Shiite coalitions of 2006 and 2010.

The alignment paves the way for a return to sectarian-based government where Shiite parties come together to form a grand coalition which doubles as a patronage network that dispenses jobs to supporters.

Last month's elections were Iraq's fourth since the 2003 U.S.-led invasion toppled Saddam Hussein. But voter turnout was the lowest in 15 years due to widespread anger at the dysfunctional political class. Allegations of widespread fraud and irregularities have further complicated the postelection scene, sparking calls for a recount and fresh elections.

Al-Sadr did not seek a seat himself, but Sa'eroun took 54 seats of the 329-seat body, followed by Fatah with 47.

The cleric, who once led a militia in the insurgency against American forces, directed mass protests in recent years that included calls to end foreign interference in Iraqi affairs. He would single out Iran and Iran-backed Shiite militias that were widely accused of human rights violations against Sunnis while fighting IS.

When the results were announced, his followers poured into Baghdad's Tahrir Square, chanting: "Iran, out, out."

But now it appears the 44-year-old leader, constrained by his slim margin of victory, has little choice but to cut deals with Iran-backed factions and other Shiite blocs. Al-Sadr's coalition with the Fatah bloc gives them 101 seats in Parliament — still short of the 165 needed to name a new government — though with the remaining three Shiite blocs they would have 188.

"The reality after the elections is what motivated the alliance between Sa'eroun and Fatah as the two top winners with major seats," said Jaafar al-Mousawi, a politician linked to al-Sadr.

The Iranian role was further highlighted by indirect discussions between al-Sadr and al-Amiri overseen by Tehran that lasted for ten days, said a third Shiite politician who took part in the discussions. After a five-hour meeting in al-Sadr's house in Najaf on June 12, the two leaders announced their deal in a surprise press conference after midnight.

"Today's announcement is a prelude for the National Alliance," declared al-Amiri.

It followed a deadly blast in al-Sadr's electoral stronghold in eastern Baghdad and a mysterious fire in warehouse believed to store ballots from the same area. No one has claimed responsibility for either incident.

It was just months ago that al-Sadr derided a short-lived alliance between al-Amiri and al-Abadi as "repugnant." Now, he has joined in a coalition with both.

"It will be a catalyst to expedite forming the new government, and it will spur others to arrange their papers ahead of formal discussions," he said, referring to Sunnis and Kurds.

Al-Amiri, who spent more than two decades in Iran and enjoys close ties with its Revolutionary Guard, leads the powerful Badr Organization, one of the main state-sanctioned militias that fought the Islamic State group.

He is said to have his eyes on the position of prime minister.

A politician close to al-Abadi, who also requested anonymity because he was not authorized to speak to media, said the "Iranian will" was behind the "alliance of the militias." He added that Iran "has sent a message to America that it still has a major role and influence in Iraq."