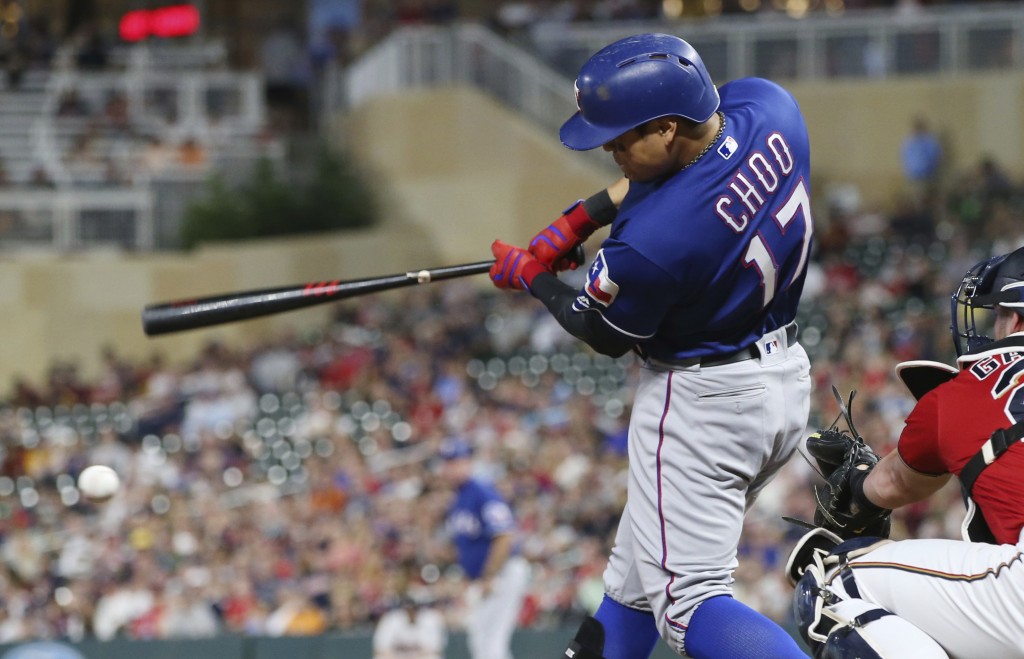 Bouncing back from a rough May, Minor (5-4) has thrown three straight quality starts for the first time since throwing six straight in 2014 for Atlanta. He allowed one run and three hits, lowering his ERA for June to 2.84.

Choo's two-run shot off Fernando Romero (3-3) made it 4-0 in the fifth. It was his second homer on Texas' six-game road trip.

Minor faced the minimum number of batters through five innings despite a first-inning single by Brian Dozier to deep left. Dozier tried to stretch for second, but Joey Gallo had a good jump and easily threw him out to end the inning. Minor retired his next 12 batters before Max Kepler doubled to lead off the bottom of the sixth.

Texas opened the fourth with three straight singles off Romero, including a run-scoring hit up the middle by Adrian Beltre. Rougned Odor then drove in Nomar Mazara with a fielder's choice.

The Twins finally broke through in the sixth when Joe Mauer's one-out double scored Kepler, putting runners on second and third. But Minor retired Eddie Rosario and Dozier on popups, ending the threat.

Chris Martin got three outs before Jesse Chavez finished for his first save. Choo, Mazara and Beltre each drove in runs off Matt Belisle in the ninth.

Rangers: Martin (calf) was reinstated from the 10-day DL. Texas optioned Ricardo Rodriguez to Triple-A Round Rock on Thursday to make room for Martin, who was hurt while attempting to run onto the field during a benches-clearing brawl with the Dodgers last month. ... LHP Martin Perez (elbow) is scheduled to begin a rehab assignment for Class A Hickory on Monday. Manager Jeff Banister said he expects Perez to work at least three innings. ... LHP Joe Palumbo will pitch for the Arizona League Rangers on Sunday, marking his first action since undergoing Tommy John surgery in April 2017.

Twins: Rosario went 0 for 4 after missing a game with shoulder soreness. ... INF Eduardo Escobar pinch-hit in the eighth after taking a pitch to the elbow Thursday against Boston. Manager Paul Molitor said before the game he was optimistic Escobar would be ready to start Saturday. ... RHP Ervin Santana (finger) threw 35 pitches to hitters on Friday. "He said it's one of the better days he's had in a while, so I was encouraged by that," Molitor said.

Rangers: Yovani Gallardo (0-0) will make his second start of 2018 after exiting Sunday's game against Colorado trailing 5-1.

Twins: RHP Jake Odorizzi (3-4) makes his seventh career start against the Rangers and first of the season. He's 4-0 with a 2.02 ERA against Texas.