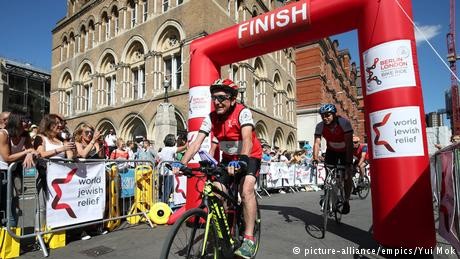 A group of over 40 cyclists arrived in London on Friday, completing a five-day ride from Berlin to honor the trains that transported Jewish children to the UK ahead of WWII.

The oldest cyclist, 81-year-old Paul Alexander, was one of 10,000 children who found safety from the Holocaust after Britain agreed to accept the Kindertransport (child transport) trains. His parents put him on a train from Germany when he was 18 months old, and he arrived in London in July 1939.

"I have to thank my mother and father for sending me off on my own," Alexander told Britain's Press Association on Friday, after completing the journey organized by the British-based World Jewish Relief group. "One can't imagine how they felt at the time."

Both of his parents subsequently managed to reach the UK themselves and his family was reunited. Alexander stayed in London until he was 24.

"I was lucky, I was reunited with my parents after three years, I had a good life in England and then I moved to the state of Israel, built a beautiful family there and my life has been very wonderful," he said.

Alexander's 34-year-old son Nadav and 14-year-old grandson Daniel made the trip with him. The 81-year-old lawyer and his wife have three children and nine grandchildren.

"The thought that came to my head is that this is my answer to Hitler, to sort of prove to myself, to show the world and to express my thanks for succeeding in life and being a happy married man with a family," he said when he set off from Berlin on Sunday.

British Ambassador to Germany Sebastian Wood attended the start of the event in Berlin, alongside representatives of the German government.

"Our past is a reminder to fight against anti-Semitism, racism and other forms of discrimination," said German Foreign Ministry representative Karina Häuslmeier. "We owe this to the children who survived and those who didn't."

After Nazis took power in 1933, they gradually imposed their anti-Semitic policies over Germany and encouraged violence against Jews. In 1938, at the brink of the World War II, Nazis and their sympathizers organized a string of pogroms in Germany, most notably Kristallnacht in November.

Following Kristallnacht, a group of Protestant, Jewish and Quaker leaders appealed to UK's then-prime Minister, Neville Chamberlain, to accept unaccompanied Jewish children. Jews in Germany, but also in Austria, Poland, and ex-Czechoslovakia managed to send their children to Britain. Many of the children's parents perished in the Holocaust.