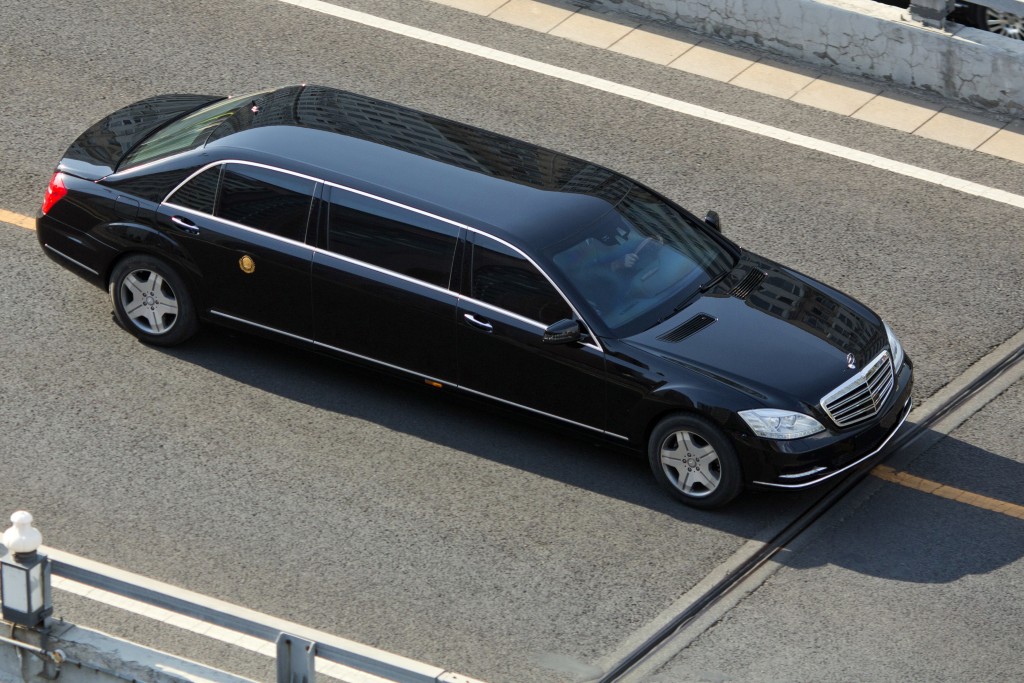 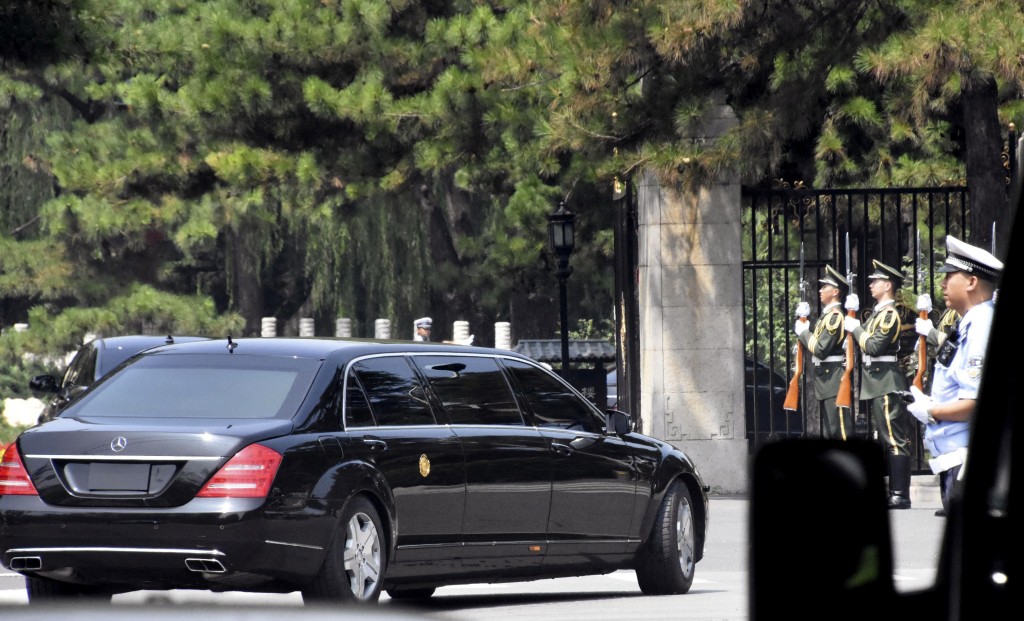 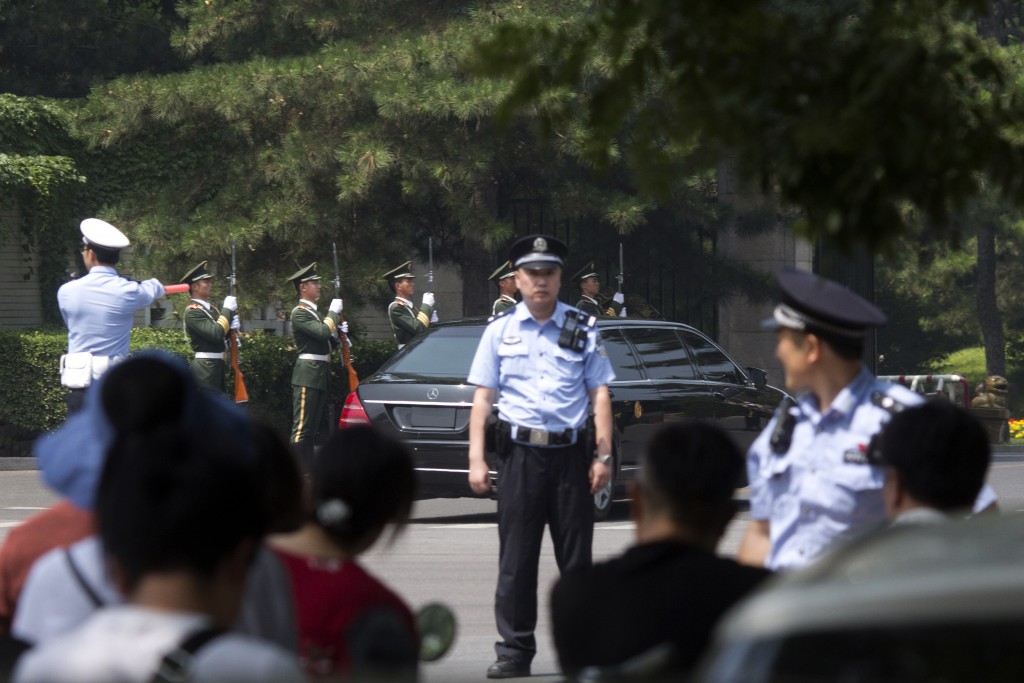 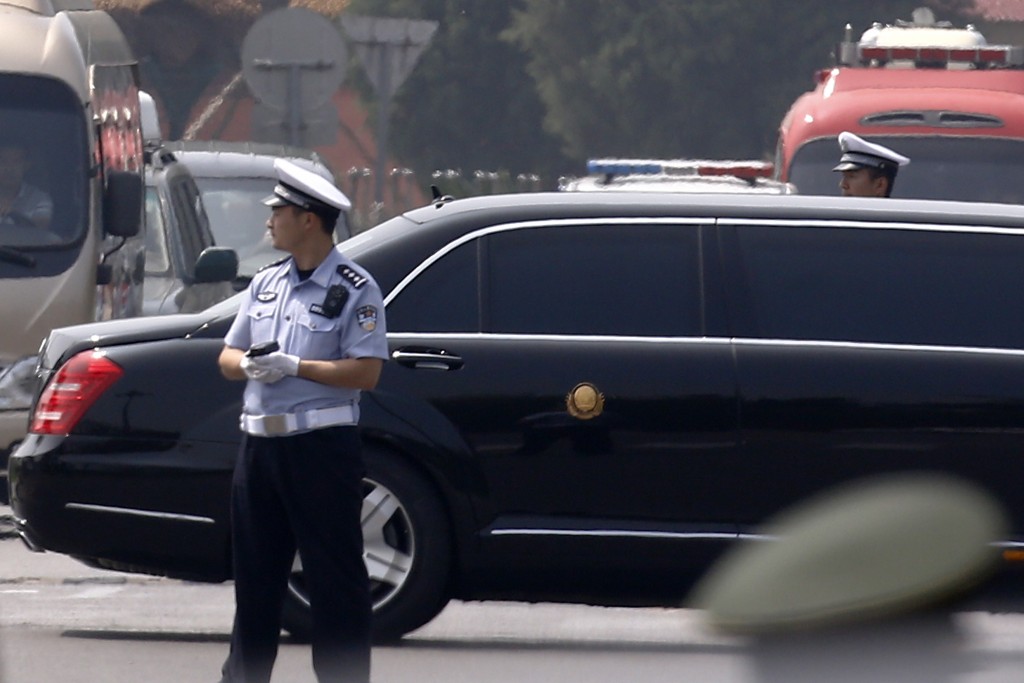 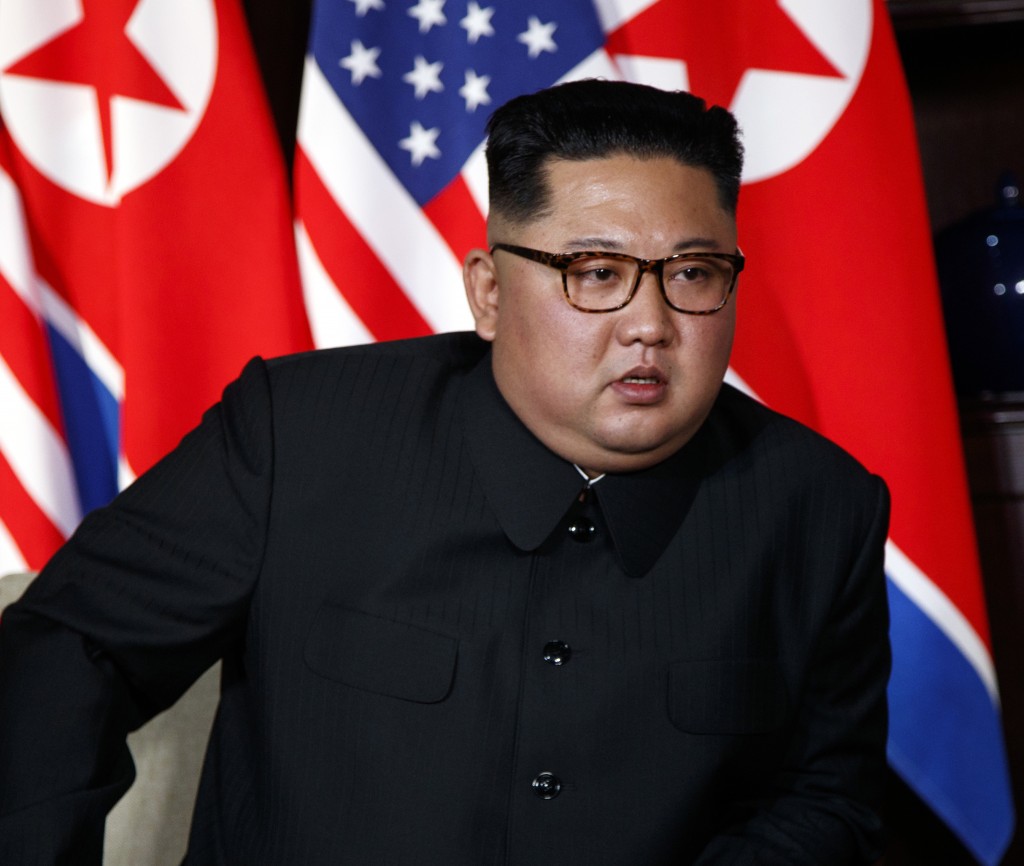 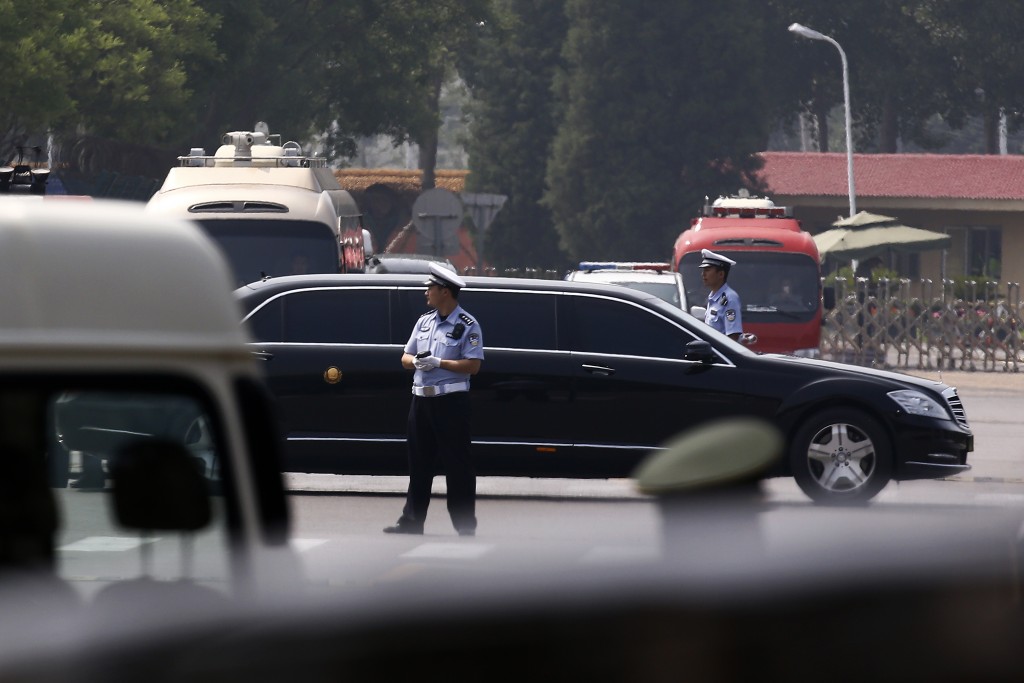 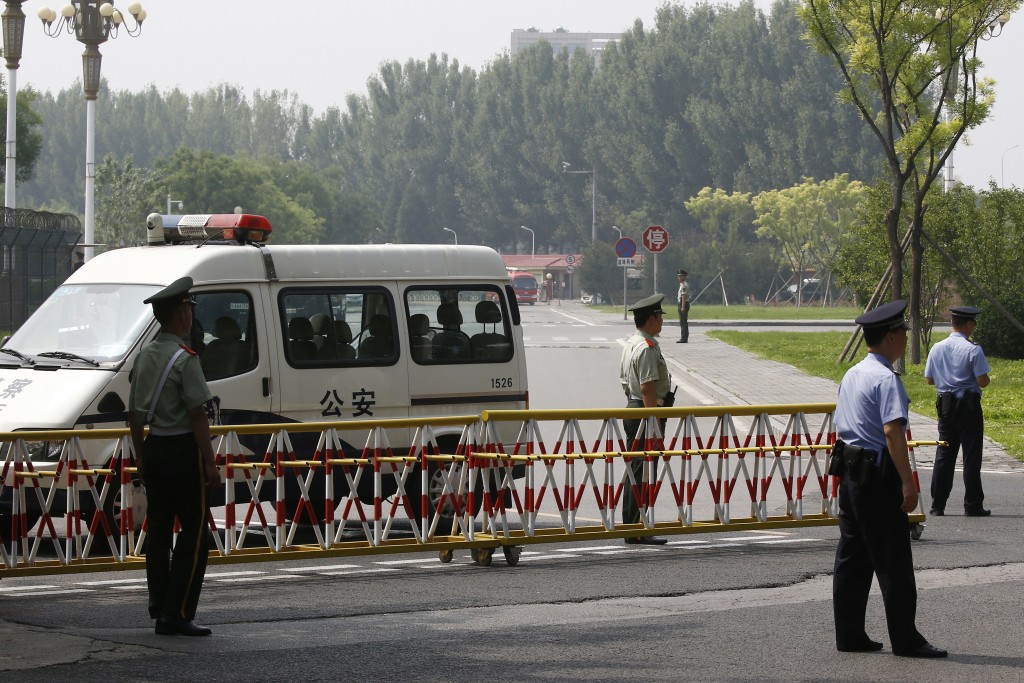 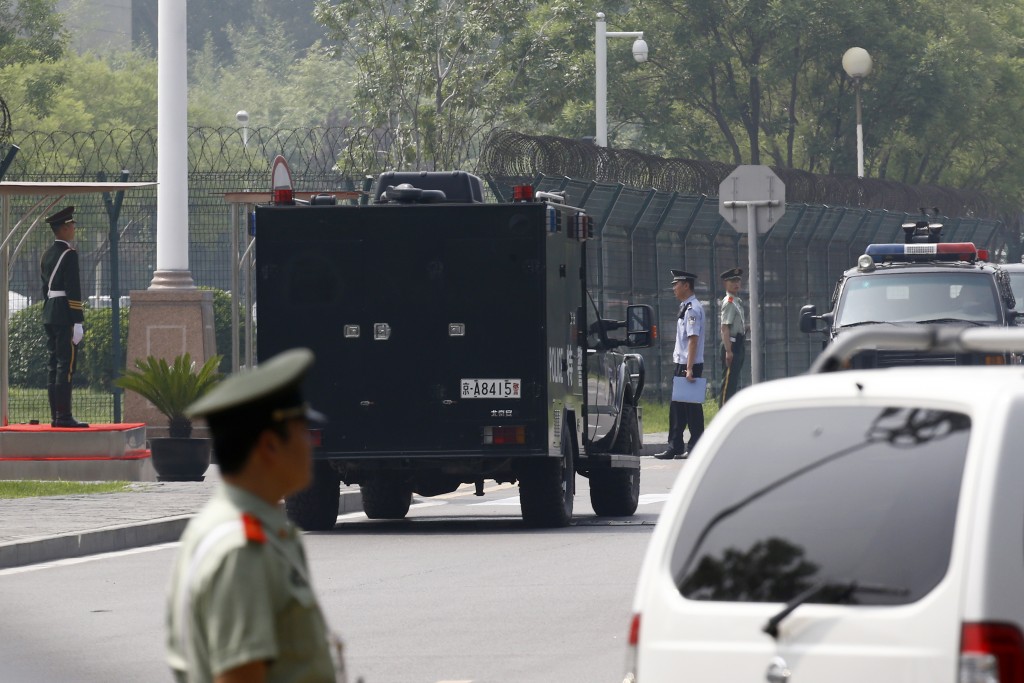 CCTV showed Kim in talks with Xi on Tuesday at the Great Hall of the People in Beijing. Experts have said Kim is expected to discuss his next steps with Chinese leaders after last week's nuclear summit with U.S. President Donald Trump.

Kim's two-day visit to Beijing, while expected, is one way for China to highlight its crucial role in U.S. efforts to get North Korea to abandon its nuclear program. The U.S. has long looked to China to use its influence with North Korea to bring it to negotiations, but the visit comes as ties between Beijing and Washington are being tested by a major trade dispute.

Ministry spokesman Noh Kyu-duk said Tuesday that Seoul and Beijing share a "strategic goal" in achieving the "complete denuclearization" of the Korean Peninsula and that progress in nuclear diplomacy has facilitated high-level contacts between North Korea and its neighbors.

He did not provide a straightforward answer when asked whether Beijing notified Seoul of Kim's trip in advance.

Noh also downplayed concerns that improved relations between China and North Korea could result in China loosening its sanctions against the North, saying that Beijing has repeatedly stated its commitment to U.N. Security Council resolutions against North Korea.

Kim is making a two-day visit to Beijing, where he is expected to discuss with Chinese leaders his next steps after his nuclear summit with President Donald Trump last week.

North Korean leader Kim Jong Un is making a two-day visit to Beijing starting Tuesday and is expected to discuss with Chinese leaders his next steps after his nuclear summit with President Donald Trump last week.

Kim's visit to Beijing, while expected, is one way for China to highlight its crucial role in U.S. efforts to get North Korea to abandon its nuclear program. The U.S. has long looked to China to use its influence with North Korea to bring it to negotiations, but the visit comes as ties between Beijing and Washington are being tested by a major trade dispute.

Chinese President Xi Jinping "is exerting a lot of influence from behind the scenes," said Bonnie Glaser, senior adviser for Asia at the Center for Strategic and International Studies in Washington. Glaser said it was predictable Xi would want to be briefed by Kim directly about the North Korean leader's talks with Trump.

"I expect they will talk about the path going forward and where priorities should lie," Glaser said. Those priorities, from China's perspective, would be to ensure that Beijing is included in any in peace treaty talks and for creating an environment on the Korean Peninsula that will make it unnecessary for US troops to remain.

Security was tight Tuesday morning in the Pyongyang airport, where another flight was unexpectedly delayed, and later at the Beijing airport where paramilitary police prevented journalists from shooting photos. A motorcade including sedans, minibuses, motorcycles and a stretch limo with a golden emblem similar to one Kim used previously was seen leaving the airport.

Roads near the Diaoyutai State Guesthouse, where senior Chinese officials meet with visiting leaders, were closed and the same motorcade with motorcycle escorts was later seen heading into the compound. A ring of police vehicles and black sedans surrounded the perimeter of the guesthouse where Kim stayed on his first visit earlier this year. Kim's presence there and the schedule of his visit, including any meetings with Xi, have not been confirmed.

Kim was diplomatically isolated for years before making his first foreign trip as leader in March to meet with Xi in Beijing. This would be his third visit to China, North Korea's main ally and key source of trade and economic assistance. Following his summit with Trump, Kim was expected to meet with Chinese leaders to discuss progress in halting his country's missile and nuclear weapons programs in exchange for economic incentives.

The Singapore meeting resulted in a surprise announcement of a U.S. suspension of military drills with its South Korean ally, a goal long pursued by Beijing and Pyongyang. That move is seen as potentially weakening defenses and diplomacy among America's Asian allies, while bolstering China and Russia.

The U.S. has stationed combat troops in South Korea since the Korean War, in which China fought on North Korea's side and which ended in 1953 with an armistice and no peace treaty.

The state media treatment of Kim's visit departed from past practice of not announcing his travels until Kim returned home. Analysts said Beijing appeared to be trying to normalize such visits.

Cheng Xiaohe, an associate professor at Renmin University's School of International Studies in Beijing, said the frequency of Kim's visits was "unprecedented." He noted that unlike on previous visits, China's state broadcaster CCTV announced Kim's visit before his departure.

"This is an improvement. This shows that China is moving toward a healthier and more normal direction in relations with North Korea," Cheng said.

The visit comes as a dispute over the large trade imbalance between China and the U.S. has been escalating, straining ties between the world's two largest economies and moving them closer to a potential trade war.

Trump recently ordered tariffs on $50 billion in Chinese goods in retaliation for intellectual property theft. The tariffs were quickly matched by China on U.S. exports, a move that drew the president's ire. On Tuesday morning China woke to news that Trump directed the U.S. Trade Representative to prepare new tariffs on $200 billion in Chinese imports, a move swiftly criticized by Beijing.

A trade war with the U.S. could make it less attractive for China to use its influence over North Korea to help the U.S. achieve its objectives of denuclearization.

"The potential comprehensive trade war will make the cooperation between China and U.S. in North Korea's nuclear issue more complicated," Cheng said. "There will be a big question mark over whether China and U.S. will continue this cooperation."