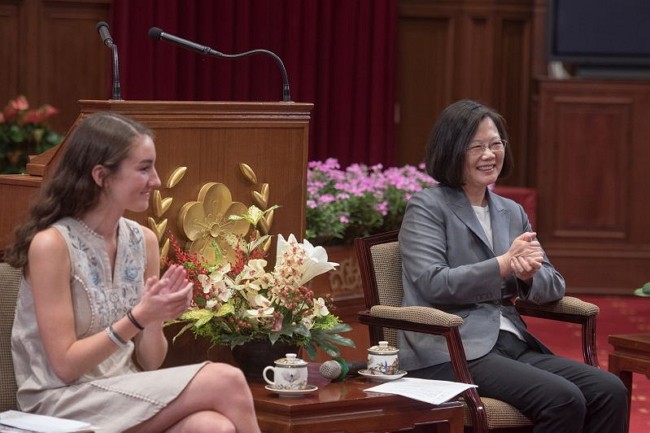 President Tsai Ing-wen said June 15 that Taiwan is willing and able to share its considerable expertise and know-how in combating malaria with other countries and raise global health standards.

The difficulties Taiwan faces on the diplomatic front have limited its ability to contribute to international malaria-fighting efforts, Tsai said. Irrespective, the nation is resolute in taking every opportunity to make a difference in the lives of those in need, she added.

Tsai made the remarks while receiving U.S. anti-malaria campaigner Katherine Commale and her family at the Office of the President in Taipei City.

The 17-year-old from Pennsylvania first made headlines at age five after she began raising funds to purchase mosquito nets for children in Africa. Over the past 12 years, she helped keep millions safe from malaria on the continent and is a major participant in Nothing But Nets—a global grassroots campaign launched in 2006 by the U.N. Foundation, according to the Office of the President.

Tsai said it was not so long ago that Taiwan faced the threat of malaria. But the commitment of public health specialists such as Dr. Lien Jih-ching, as well as the implementation of effective controls, saw Taiwan declared free of the scourge in 1965 by the World Health Organization. The people of Taiwan remain grateful to this day and celebrate the fact that no locally transmitted cases have been reported over the last 53 years, she added.

Lien, aka Mosquito Man, used his experience in Taiwan to help countries further afield such as the West African island state of Sao Tome and Principe. In November 2016, he was awarded the Grand Medal of Diplomacy by the Ministry of Foreign Affairs.

The contributions of Commale—making her first visit to Taiwan—are an inspiration, Tsai said, adding that it is hoped the younger generations will look to her as an example of what can be accomplished on a global scale through dedication and hard work.